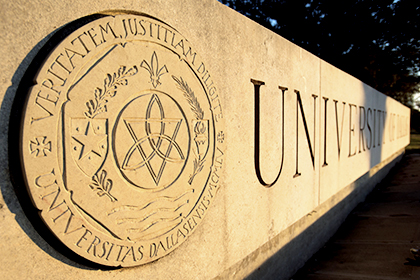 University of Dallas Board of Trustees Chairman Thomas M. Zellers, M.D., announced today that President Thomas W. Keefe, J.D., will be completing his tenure at the university at the end of this academic term. The university will begin a search for a new president this summer.

In an announcement emailed to the university community, Zellers said, “After careful consideration and prayer, the University of Dallas Board of Trustees has determined that the university would benefit from a change in leadership in order to continue to grow and maintain its position as one of the nation’s leading Catholic universities.”

The announcement noted Keefe’s many contributions to the university in his eight years as president, stating that the university had “benefited considerably from President Keefe’s contributions over these past eight years.” Zellers also said that Keefe parts with “the appreciation of the board, faculty, staff, student body and alumni.”

During the initial phase of the transition, in keeping with university policy, John Plotts, Ed.D., executive vice president for enrollment management and student affairs, will act in the president’s stead when necessary. According to Zellers, the board plans to appoint an interim president while the university conducts a national search for its next president.

Zellers also said, “The board of trustees is committed to ensuring that our students continue to receive the exceptional education that has given the University of Dallas a well-earned reputation as The Catholic University for Independent Thinkers.”

The announcement concluded by asking the university community to “join the trustees in remaining focused on our mission of education in pursuit of wisdom, truth and virtue that leads to the formation of leaders who act responsibly for their own good and for the good of their family, community, country and church.”