When Foresight Is 20/20: Endowment Gains 27 Percent in One Stroke Thanks to $10 Investment 24 Years Ago 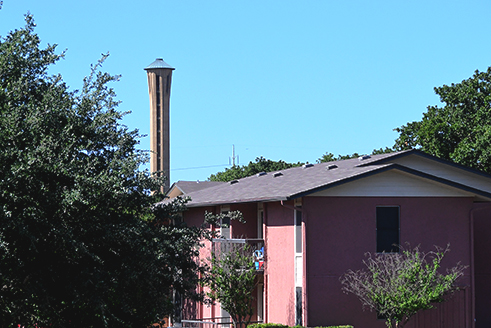 At a time when many small liberal arts universities are struggling, the University of Dallas has some good news to offer: The strategic sale of the apartment complex owned by the university for 24 years increased the endowment in the spring by nearly 27 percent, or $16 million, bringing the current value to over $82 million. Further, this increase is predicted to eventually generate an additional $800,000 annually for UD’s operations, capital and maintenance budgets.

Still known in the University of Dallas community by its former name of “Old Mill” (it was officially called “Old Mill Stream”), the Tower Village apartment complex, located across the street from the university, was a $10 purchase by UD from the Department of Housing and Urban Development in 1994. At the time troubled, crime-ridden and condemned, it was still home to many UD students, so the university’s board considered what might be done to save it. The late Robert Power, former UD trustee and one-time mayor of Irving, was instrumental in negotiating with HUD to allow UD to purchase the property. The agreement included UD’s investment of $5 million to rehabilitate and renovate the apartments.

Now itself probably half a century old, “Old Mill” has been around nearly as long as UD itself; even before the university owned the property, a relationship existed between the two entities: In the ’70s, UD leased an apartment there to house professors for the McDermott Lectureship; great public intellectuals Jacques Barzun and Marshall McLuhan enjoyed its convenience to UD during their McDermott visits. An Old Mill apartment was also the home of famous novelist and critic Caroline Gordon, who began a graduate creative writing program at UD and taught here from 1973-78. Professor Emeritus of Art Lyle Novinski and retired university historian Sybil Novinski remember often visiting Gordon in her Old Mill apartment, which Lyle helped her decorate — supplying pieces of art and making small tables.

“She wanted the view from her window to look like a Claude Lorrain painting,” recalled the Novinskis.

Upon its procurement of the apartments in the ’90s, the university immediately transferred the holdings to the UD Property Management Corporation for $1 under the direction of George Herbst, then UD’s vice president for finance and administration. (“Should we negotiate, make it 75 cents?” joked the late Patrick Daly, former associate vice president of administration.)

“This was key,” explained Bob Galecke, former executive vice president and senior adviser to the president, who also served as president of the UD Property Management Corporation until his retirement in 2016. “It always operated as a separate corporation. The $5 million for renovations was borrowed from the bank, and paid back entirely from the rental income generated by the property; UD’s own money was never used.”

In fact, the property’s income paid significant dividends to UD, as the parent company, over the years. Always run by its own board of trustees and managed by a third-party entity, Tower Village has remained a popular and cost-effective residence for upperclassmen for whom there is not always sufficient housing on campus in residence halls or in the Student Apartments. While it by no stretch has been solely occupied by students, Tower Village’s board under the UD Property Management Corporation made decisions always mindful of student housing needs, and the resident base of the apartments in general has improved since UD took the title to meet compliance with HUD in 1994.

“As a resident of Old Mill in the '70s, I have seen these apartments change from cheap housing to a prime UD investment, and now to a pillar of our endowment,” said Trustee Greg Hoelscher, chair of the board’s endowment committee. “Congratulations to the wise UD administrators and trustees who successfully shepherded this project for so many years.”

In 2017, the board anticipated that the increasing costs to maintain the property would, over the next few years, significantly reduce or eliminate the annual dividend returns that could be transferred to the university, and the UD Property Management Corporation sold Tower Village for what was, according to Galecke, “a strong premium price.” At the end of this past 2017-18 school year, UD’s Board of Trustees formally accepted a donation from the UD Property Management Corporation in the amount of $16,565,740.78 generated from this sale, plus an additional $50,231.04 in income earned while the sale proceeds were invested during the liabilities period and $82,199.95 for the final year-end dividend.

The UD Property Management Corporation made the gift of $16 million to the endowment subject to a corporate restriction that the income from $11 million of the endowment investment would be designated to perpetually fund deferred maintenance for the Irving campus, which formerly was paid for with Tower Village net earnings. The trustees further agreed to place $600,000 in a reserve account to be used only for capital improvements or deferred maintenance, and $82,199.95 was received as a traditional dividend to the operations budget.

The trustees noted that in the case of Tower Village, foresight appears to have been 20/20, as the investment of $10 for a return of over $16 million was recognized as a prudent long-term decision.

“It was a phenomenal investment for the UD parent company and a great business decision made by our forefathers at UD,” said Galecke.

Additionally, the university’s chief financial officer, Brian Murray, noted regarding the sale and investment of the funds into the endowment, “The board has made a decision whose legacy for protecting the university’s building and capital assets will outlive all of us and ensure that the Irving campus will remain a safe and attractive place for students to live and study.”