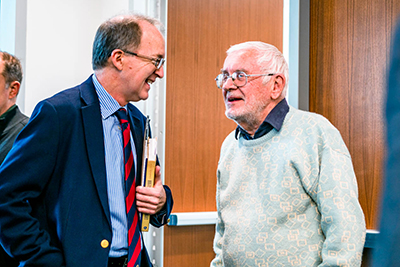 “Endowed scholarships make possible the ongoing impact of legendary faculty indefinitely and allow students of the next generations to have the experiences that you two and I had,” said President Thomas S. Hibbs, Ph.D., BA ’82 MA ’83. “So we are immensely grateful for your generosity and for your thoughtfulness in honoring two great faculty members at the University of Dallas. Not only will these scholarships make possible other students coming here, but it's a way for us to memorialize the great work that's been done by faculty. I think the University of Dallas is countercultural in lots of good ways. One is that we have not fallen prey to the kind of cultural amnesia that afflicts so much of what goes on in America today and in our world. And one of the ways internally that we're deliberate about this is remembering and honoring the faculty and staff who have helped build the University of Dallas.” 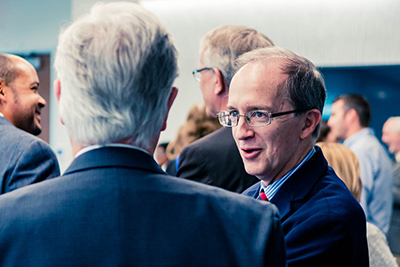 Associate Professor of Politics and Director of the Politics Graduate Program Richard Dougherty, MA ’89 PhD ’93, remembered the late English professor Helen de Alvarez, Ph.D., and Professor Emeritus of Politics Leo Paul de Alvarez, Ph.D., from his time as their student as well as their colleague. Helen de Alvarez was actually responsible for him coming to UD, as she was the graduate director at the time he applied to the program.

“I remember receiving this, I think, five-page single-spaced letter describing exactly what the University of Dallas graduate program does,” he said. “And any rational person who read that would say, ‘That's where I want to be.’”

“Dr. [Leo Paul] de Alvarez could not be here today as he is recovering from a bout of pneumonia, but he has personally asked me to convey his profound thanks for the honor accorded to him and Helen,” added Dougherty. “Dr. Helen was, of course, a longtime University of Dallas English professor who, unfortunately, passed away too young in 2013. But I know she would have been absolutely tickled, especially that former students would display such thoughtfulness. She would also gently suggest that I not employ too many run-on sentences.”

He recalled how it took years for him to work up the courage to call Leo Paul de Alvarez by his first name once they were colleagues; he credits de Alvarez with teaching him to read a text. 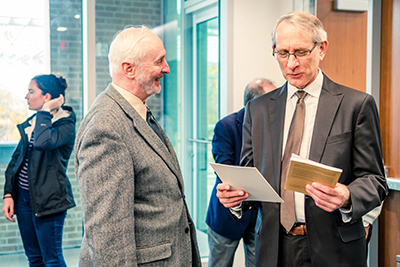 “In my first semester of coursework in graduate school, I remember as if it were yesterday … being assigned to read Cicero’s De Re Publica. And then attending class on the material where it occurred to me that I must have read the wrong assignment, for what this professor had to say had seemingly little correspondence with what I thought I had read,” explained Dougherty. “Or so I thought. It turns out, of course, that it had little to do with what I thought I read, or what I had read was not the text but what I wanted to read or discover in the text. Learning to read a text or truly reading a text takes a generous amount of time and effort, but is immensely liberating. And this we learned from Dr. de Alvarez.”

“First and foremost, he was always a teacher,” added Dougherty. “One could not be in his classroom for too long without realizing that you were blessed with having someone whose most profound concern was with understanding the greatest thinkers, with mining their text for the deepest truths and with conveying that knowledge to those who were really, we'd have to admit, not quite prepared to receive it. If a liberal arts education, the kind of education we seek to promote here at the university — if by that education we commit ourselves to a serious investigation of the unadulterated truth, as pleasing or as discomfiting as it might be, in Dr. Leo Paul de Alvarez, we were profoundly blessed with the surest of guides.” 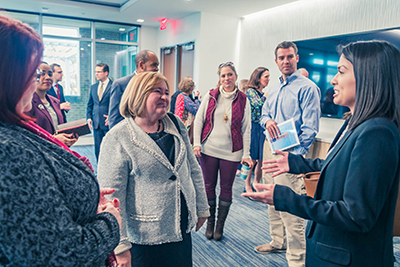 Kurt Daniel was a politics major at UD and thus, like Dougherty, deeply influenced by the teaching of Leo Paul de Alvarez; Debbie Daniel, meanwhile, was a biology major, and herself deeply influenced by Pre-Health Adviser and Professor Emeritus of Biology Frank Doe, Ph.D.

Associate Professor and Department Chair of Biology William Cody, Ph.D., recalled a current student asking, “Who’s the new guy?” one day after Doe’s retirement when Doe came to visit, and the student saw him talking with the other faculty. Cody was floored that this student wouldn’t know the legendary Doe.

“50 years of students had the opportunity to take a class with Dr. Doe,” said Cody. “So as we move into this generation of students who won't have that opportunity, I can't think of a more fitting reflection than to have a scholarship named after him that's going to provide opportunities for undergraduate students.”

“The department would like to thank Dr. Doe for his mentorship, for his guidance, for sharing his vast knowledge and experiences with us, and for showing us the student outcomes you can achieve when you're dedicated to your students and generous with your time,” added Cody. “To the Daniel family, we thank you for your support, especially for this particular gift of future generations of UD biology majors who will now recognize the name Frank Doe and the contributions he's made to the university.” 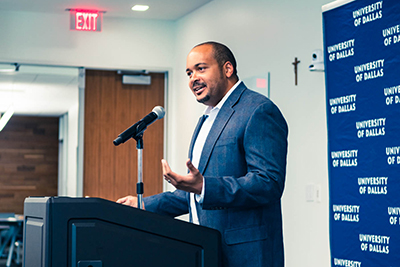 Doe, who was considered one of the premier pre-med advisers in the state, recalled his joy in working with the students, especially those who would not immediately be classified as academic stars, but through hard work would turn out that way.

“Some of them might be your doctors now,” he said. “So I just want to say thank you to you guys; it's wonderful.”

“Debbie and I are very pleased to make these endowment gifts,” said Kurt Daniel. “We are happy to be present to help celebrate the contributions of Dr. Doe and Drs. Helen and Leo Paul de Alvarez, who were our teachers. They were also our friends.”

He recalled how the de Alvarezes had been in Rome during his semester there, and he traveled with them to Florence, getting to know them outside of the classroom.

“Leo Paul’s desire as a teacher was to be invisible between the student and the text,” he said. “His purpose was to teach us how to read and understand the text. The skills learned through Dr. de Alverez  have served me throughout my life.”

Debbie Daniel recalled the competitive exam she took that enabled her to come to UD on scholarship as an undergraduate; she credits UD with shaping her spiritually, intellectually and socially. 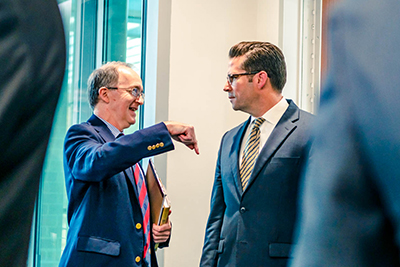 “I’m delighted we’re able to endow these scholarships,” she said.

“The great mission of this university rests upon its great faculty,” concluded Kurt Daniel. “The gift that Debbie and I have made, we've made in honor and celebration of the contributions of Dr. Doe and Drs. Helen and Leo Paul de Alvarez. But we also feel that by this gift, we're also celebrating this university and all of its faculty, both past and present.”