Alumni Reunite 25 Years After Rome Semester, Will Marry This Fall 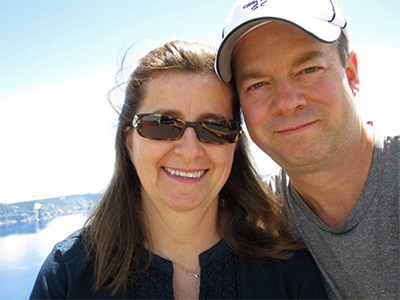 While many UD couples joke about their “ring-by-spring,” Karen Norris, BA ’88, and Michael Rouse, BS ’87, have a less conventional UD love story.

Norris and Rouse first met at New York’s JFK Airport in January 1985 while making the connection on the group flight from Dallas to Rome. They traveled together throughout the Rome semester, journeying through Europe, and visiting places like Capri and Heidelberg. In addition to late-night studies of Aristotle, Norris and Rouse have fond memories of playing Trivial Pursuit with a group of friends in the dorm lounge. While they were good friends during the rest of their time at UD, they lost touch after graduation.

It was only about 10 years ago, nearly 25 years after their Rome semester, that they crossed paths again when Norris Googled her name. “I found out that Karen Norris is a 1940s movie star ... and my name popped up on Michael’s website,” said Norris. This sent her searching through her own albums of memories from UD and the Rome semester, looking for this fellow alumnus and spring 1985 Romer in her own photographs. She reached out to Rouse via email, and much to her surprise, he sent her a reply, and they began an email correspondence that continued until Rouse came to Fort Worth on a work trip. “When I first saw her, she was still the pretty girl from across the classroom in Rome,” said Michael. They struck up their old friendship again and soon began dating. 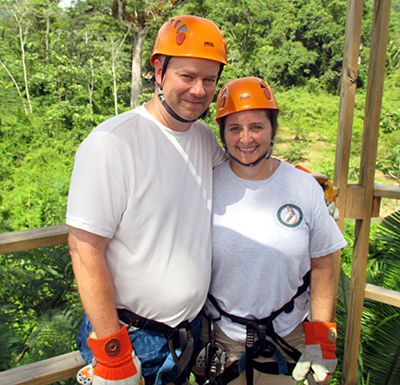 Inspired by Professor of Physics Richard Olenick’s classes, Rouse, a former physics major, proposed on a beach in Oregon during the diamond ring effect of the 2017 total solar eclipse: “I proposed at exactly 10:17:51 a.m. PDT (plus or minus a couple of seconds) on August 21, 2017, at 44°45’03” N latitude and 124°03’52” longitude (within a quarter second of arc). I am the most attentive fiance ever! Thank you, solar eclipse!”

They will be getting married at Immaculate Conception Jesuit Church in New Orleans on Oct. 24, 2019, and at their reception they will serve — what else? — Due Santi wine. Since Norris works in Dallas as the director of curriculum and instruction at Momentous Institute, the couple will start their new life together in Irving, although Rouse jokes that he is really just moving back to be closer to the Cap Bar.

While Norris and Rouse might not have begun dating while at UD, they still credit UD — and their Rome semester in particular — for their love story. “My time at UD gave me friends for life, and my semester in Rome gave me my wife,” said Rouse.