Cor Story: From the NFL to Team Facilities 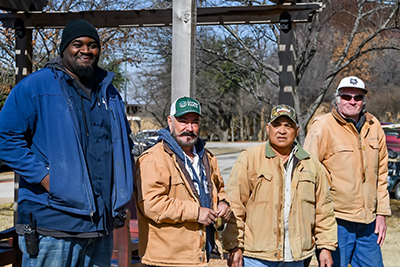 Brandon Cox, MBA ’18, first heard about UD in 2013 when he was looking for an MBA program. While searching UD’s website he also noticed there was a job opening in the Facilities Department.

Looking at the job description, he felt that working on the grounds crew in Facilities was something he would enjoy. As an undergraduate at the University of Louisiana at Lafayette, Cox had spent his summers working with the housing crew putting together beds in residence halls and had enjoyed this experience.

As both a student and a staff member, Cox was immediately drawn to the family and close-knit community that UD has to offer.

“I started working on the grounds crew, and everyone in the department was friendly,” said Cox. “I drive by people in my golf cart and they say, ‘Hi Brandon, how are you?’ and there’s something to that — it doesn’t make work seem like work.”

Towering at 6 feet 7 inches, Cox grew up playing basketball in PIttsburg, but when he moved to Irving in high school his coaches suggested he play football. Being a natural, Cox played four years at Nimitz High School and then went to the University of Louisiana, where he excelled on the football field while studying criminal justice. In his senior year, Cox was placed on the Lombardi Watch List for the nation’s best lineman. After college, Cox spent a summer playing with the Chicago Bears in the NFL.

On the field, Cox played guard and tackle on the offensive line — a job whose main function is to protect the team’s quarterback (think The Blind Side). Playing on the offensive line requires a tremendous amount of teamwork and dependability — skills toward which Cox has always gravitated.

In the Facilities Department, Cox manages and leads the grounds crew; the roles and responsibilities of his team vary tremendously from day-to-day. “We do everything from irrigation to landscaping. One day we might be fixing a pipe in the ground, the next day we might be planting plants. One thing we just finished doing was putting up three-tiered seating around the baseball field for the fans. We’re always looking for ways the campus can be beautified or improved upon.”

In true team fashion, Cox’s favorite type of projects include tasks where the crew draws upon the skills of everyone in the group.

“One of the reasons why I like this job so much is because it’s a team. Everything I’ve ever done has been as a team. You can compare the roles we have here with roles on the football field. On the football field, the quarterback, offensive lineman and running back all have different jobs. Whether it’s throwing the ball, blocking or running the ball, it all comes together for one goal, and our team’s goal is to beautify the campus.”

Reflecting back on the nearly six years that Cox has been at UD, he notes that the biggest changes he’s seen have been the new buildings and the new beauty that’s come along with them. “I always forget to take before-and-after pictures,” he jokes.

One of Cox’s next projects includes improvements to the pergola near Augustine Hall. While he’s keeping the final plans for the pergola a secret for now, he’s excited for everyone to see and enjoy the finished product.

What do you love about UD? From Feb. 26 - March 2, give to the Cor Challenge and share your stories on social with #LoveYeUD.