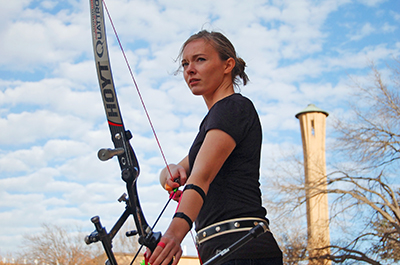 As an incoming freshman, Abigail Wade, BA ’19, thought she might major in one of the sciences and ultimately become a physical therapist; now she’s an art major, with a focus in painting. Some things have not changed, however: She is still aiming to represent the U.S. on the archery team in the 2020 Olympics. Also, her love for UD has only grown in her nearly four years here.

She used to work with renowned archer Khatuna Lorig, Jennifer Lawrence’s coach for the Hunger Games movies and an Olympic champion herself, but now mostly self-coaches as practice time is limited these days; Wade most often practices in the basement of Jerome, where she lived in her underclassmen days at UD (she now resides in the student apartments).

“I’m starting to pick up the pace of my training,” she said. “I do something every day, whether form or shooting.”

She focuses a lot on overall fitness, with push-ups, running and a ballet workout.

She’ll start working more on distance shooting this summer, back at her family’s home in New Hampshire; they have a field where she can practice. For now, she’s doing what she can as she finishes up her last semester at UD, but it’s hard to find the time to drive to a shooting range. For the Olympics, she must be able to shoot from 70 meters. 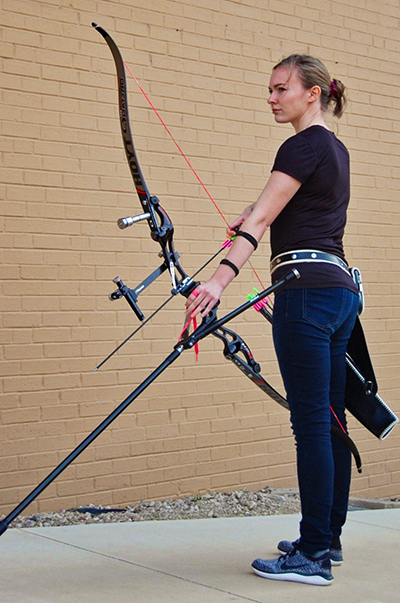 One of Wade’s fondest UD memories involves the correspondence between the Core curriculum and her training as an archer: In Lit Trad I with Assistant Professor of English Kathryn Davis, MA ’08 PhD ’13 (whom Wade had for all four Lit Trad courses, even Lit Trad III in Rome since Davis was teaching there at the time), during the reading of the Odyssey when they got to the part where Odysseus must string his bow, Davis had Wade bring her bow to class and string it as a demonstration.

“She’s amazing — so passionate,” said Wade. “She made me excited about what we were studying, and her demand for perfection in writing has made me become almost in competition with myself to get better, if that makes sense.”

When asked what she loves about UD, this is Wade’s first answer: The people.

“The professors,” she said. “And the friends I’ve made — I know we’ll stay friends.”

Her Rome semester, of course, ranks highly on the list of what has defined her UD experience. She went two years ago, in the spring of 2017.

“The whole thing was incredible,” she said. “Being at the Vatican for Palm Sunday Mass and for Easter, visiting all of the sites, seeing the artwork (I knew by then that I was an art major, not science). During 10-day, we went to my friend’s family’s farm in Ireland, and that was very special. But really it’s the day-to-day memories that are so dear: being with friends, going to class, eating in the mensa.”

“It’s really challenging, but I know it will stay with me and cause me to keep growing,” she said. “It’s the type of education that allows for that — continuing to grow.”

What do you love about UD? From Feb. 26 - March 2, give to the Cor Challenge and share your stories on social with #LoveYeUD.