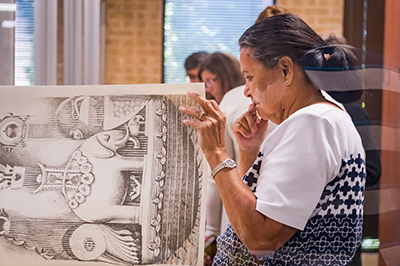 No longer relegated to the damp lower level, the Cowan-Blakley Memorial Library’s Rare Books Room has for the past two years occupied a prime spot on the second floor, where there used to be study carrels. The room, made of glass walls, is normally locked and only opened by appointment, but on Sept. 26, the library hosted an open house for faculty and staff to come and examine these treasures.

Solely donation-based, these books have come from various sources. Sometimes they are from the personal libraries of professors who have retired or passed away; sometimes someone donates their entire library, and sometimes, it’s just one book. As Archivist and Cataloguing Librarian Shelley Gayler-Smith explained, “We tend to obtain theological and religious texts of various kinds, in various languages, as well as literature; we don’t get so much in the sciences. We’re more literary arts-driven and especially want things that support curricula in some way. Sometimes professors scan pages to use in class. Some books are used by art and history professors. Sometimes it’s not about the content of the books but about the bindings, showing how books were made in the time period that they’re from.”

Examples of the collection’s prizes include an illuminated book of Gregorian chants from the latter part of the 14th century, which has only four lines in the staff. This helps to date it, as the staff came to include five lines in the middle part of the 1500s. 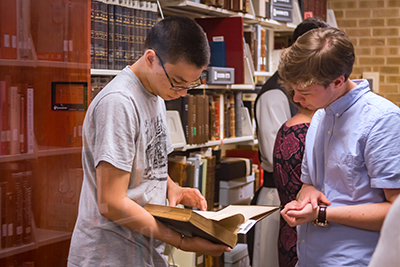 “These books were handwritten and illuminated likely by monks in Spain or Italy. It was impossible to create multiple copies due to the amount and intricacy of the work involved, so instead they made the books very big and would place them at the front of the choir for everyone to see,” explained Dean of University Libraries and Research Cherie Hohertz.

A book of cantarellas is the largest book; it came from a museum in Oklahoma and before that from a monastery that had closed. The smallest book in the collection is a tiny book of daily prayers that people would carry in a pocket; it is newer, from 1946.

Gayler-Smith is proudest of a book containing silk-screen prints by Jacob Lawrence, the first African American artist to be featured in the main collection at New York City’s Metropolitan Museum of Art; this book had been part of the Limited Editions Club, in which members were sent a limited edition book once a year or so. In the case of the Jacob Lawrence book, only 300 copies were printed.

“Rare doesn’t just mean old,” said Gayler-Smith. “Sometimes it’s rare because of a signature, an artist or the number of copies.”

Some of the Limited Editions Club books are displayed in a glass case on the library’s main floor, but the larger books from the collection, like the Jacob Lawrence book, don’t fit in the case. 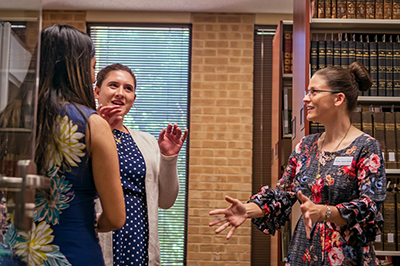 You also may have seen some of these rare books in the display case on the second floor of Cardinal Farrell Hall; Gayler-Smith showcases a different book in this spot each month.

The collection also includes reference books, such as a set of Encyclopedia Britannica from 1893 and Encyclopedia Americana from 1922.

“These books comprise many different themes,” said Gayler-Smith. “This collection is something we should be proud of here at UD.”

To visit and peruse the Rare Books Room, contact Gayler-Smith at sgayler@udallas.edu or 972-265-5397.