Music in the Museum

Crowley Trio: An Evening of Beauty 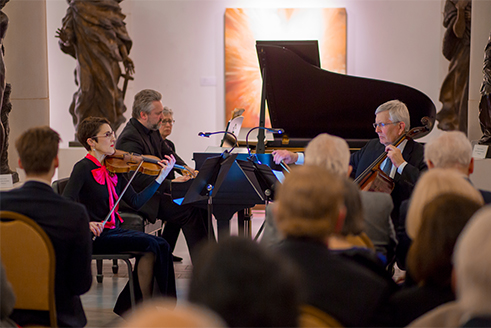 In an intimate gathering at the Museum of Biblical Art in February, UD celebrated the inaugural Crowley Chamber Trio Concert, “Music in the Museum,” the first of three concerts that took place this spring.

The opening performance rekindled the university’s popular Crowley concerts, which first took breath more than two decades ago. The new setting was the Museum of Biblical Art, a Dallas treasure trove where large bronze sculptures take on life-size shape, and drawings, fine prints and large-canvas oil paintings decorate the walls.

“We are here because beauty deserves to be vested in beauty,” said Provost Jonathan J. Sanford, Ph.D., as he welcomed guests. “This is a beautiful museum in a beautiful part of Dallas, and we have a beautiful program with music by Franz Lehar, Ludwig van Beethoven and Felix Mendelssohn.”

“We are here because of Marilyn Walker — her generosity and dauntless spirit awaken this effort,” said Sanford of UD’s former director of music. “We are here to experience beauty. To have our spirits elevated, our minds formed and our hearts filled.”

“There are far fewer opportunities today to hear chamber music in the Dallas area than there are opera, symphony or coral concerts, and we hope to help fill that void with these special concerts,” said Walker, who began teaching at UD in 1980. “We want to present the elegance and artistry of our faculty musicians to the larger public.”

“We want to introduce more people to the University of Dallas as the outstanding educational institution that it is,” said Walker. “We want to continue building our audience, and these chamber concerts are only one example of UD’s excellence.”

A lauded vocal instructor, Walker also conducted the Dallas Catholic Choir, where she met parish choir member David Crowley of Christ the King in Dallas. “We became friends, and he very much liked what I was doing at UD and wanted to help,” she said.

As a result of that friendship, David Crowley and The David M. Crowley Foundation became the most generous benefactor to UD’s music program for years to come. The new Crowley Trio was named and presented in gratitude to the late university benefactor and The Crowley Foundation; their financial support was instrumental in reestablishing music as an important presence at UD many decades ago.

Music has long reverberated from UD’s Irving campus to other parts of North Texas and even the globe. The present-day Irving Symphony Orchestra originated shortly after the university’s founding, in fact, when a modest group of musicians formed the Irving String Ensemble.

UD’s Collegium Cantorum emerged in 1993 under the direction of Walker, specializing in 16th century Latin sacred polyphony. Students rehearsed three times a week to prepare for the monthly first Friday Mass at the nearby Our Lady of Dallas Cistercian Abbey. The liturgical choir performed nationally and internationally throughout the U.S. and Europe, including at the dedication of UD’s Eugene Constantin Campus, which celebrates its 25th anniversary this year.

A few years later, in 1995, the university established the Crowley Chamber Music Series when pianist Michele McDonald, who had access to a number of local musicians from the Dallas Symphony and area orchestras, joined UD’s Music Department. The final Crowley concert took place shortly before Walker’s retirement from UD in 2012.

The closing Crowley Chamber Trio Concert of the 2019 season will include two scheduled performances the evening of Monday, Sept. 23, and Tuesday, Sept. 24. To RSVP and learn more information about the upcoming concerts, contact music@udallas.edu.