Emmet Flood to Speak at 2019 Commencement

UD will award bachelor's, master's and doctoral degrees on May 19 during the 2019 Spring Commencement 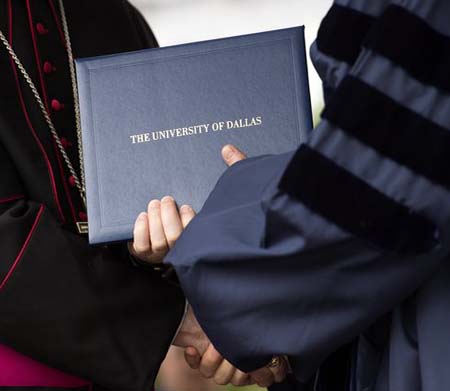 After graduating from UD, Flood spent a year teaching English at Bishop Lynch High School in Dallas, then attended the University of Texas at Austin, receiving a doctorate in philosophy in 1986. He was the Andrew W. Mellon Postdoctoral Fellow in Humanities at Wesleyan University in 1987-88, then attended Yale Law School, where he was executive committee coordinator of The Yale Law Journal.

Following graduation from Yale, he served as law clerk for Judge Ralph K. Winter of the United States Court of Appeals for the Second Circuit and for Justice Antonin Scalia at the Supreme Court of the United States. Flood practiced law at Williams & Connolly LLP in Washington, D.C., for many years, and has extensive experience in white collar defense, congressional investigations, complex civil litigation, and crisis management situations. In the private sector, he has represented two presidents, a vice president, other federal and state officials, and CEOs, as well as numerous individuals and private businesses.

In addition to his judicial clerkships, Flood’s government experience includes service as Counsel to the President, Special Counsel to the President and Deputy Counsel to the President. He is the author of published articles in philosophy, comparative literature, law and political science. Flood has served on the Advisory Council of the Catholic Charities Legal Network of Washington, D.C., and as a member of the Little Flower Parish Finance Council in Bethesda, Maryland. One of six siblings to attend UD, he is married to Ariel Vannier Flood and is the father of four children: Kate, Erin, James and Jack.