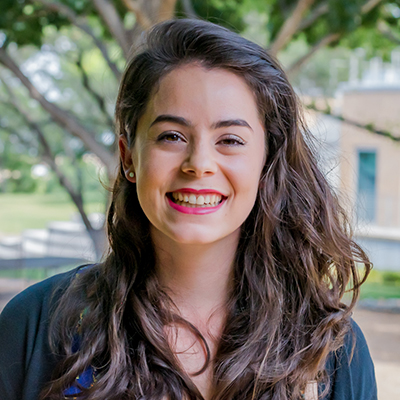 Alexandra Koch, BA ’19, initially resisted coming to UD because it was so close to her Plano home, but the more she learned about the university, the less its proximity to where she grew up seemed to matter. For example, as a prospective student, she listened to an address from Anthony Kersting, BA ’15, who had just received a Fulbright scholarship to study in Germany; while it seemed merely a dream that she might one day do the same, she was impressed by the academic formation that had prepared Kersting for such an honor and experience.

Koch received four scholarships for her studies at UD (the President’s Scholarship and the German departmental scholarship as an incoming freshman, a scholarship for her Rome semester, and the Hatton W. Sumners Scholarship), which also played a role in her decision to attend the university.

Now, four years later, Koch is UD’s 39th Fulbright recipient; she, like Kersting, will spend a year teaching and studying in Germany. (The Fulbright is a specific type of grant from the Institute of International Education; other UD students and alumni have received other types of IIE grants.) Koch, a German and politics double major, spent a month last summer at the Catholic University of Eichstätt-Ingolstadt in a German language program; this coming year, she will work as an English teaching assistant at a Catholic high school. At the University of Bonn, she plans to take classes in German literature as well as German language for foreign students.

Koch credits her UD community for inspiring her to apply for the Fulbright.

“My professors and peers were so encouraging through the application process; I really owe a lot to them for getting me where I am today,” said Koch.

She feels that she has been well-prepared for this year by the rigorous German and language pedagogy classes she had the opportunity to take at UD. The Rome Program, as well as the German program last summer, also bolstered her confidence in her ability to travel and to live abroad for an entire year — during which, other than teaching and taking classes, Koch plans to immerse herself in her German community as much as possible, from joining her church choir to volunteering with local Catholic charities.

Once her Fulbright year is over, Koch hopes to work in the public policy field on issues relating to the promotion of human dignity.

“Both in Rome and in Irving, much of my formation has come from being a part of the UD community. I have forged friendships that I expect to last a lifetime, grown through my leadership positions on campus, and been so supported and encouraged by my incredible professors,” said Koch. “My four years at UD — and studying Aristotle’s Politics — have taught me that a true community exists not simply for the sake of living, but for the sake of living well.”

In a sense, Koch will take this community with her to Germany, as well as to wherever she goes next.