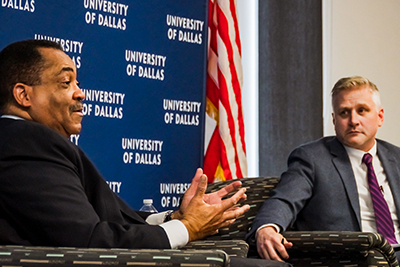 In Martin Luther King Jr.’s own time, not everyone loved him, not even all black people; some thought he wasn’t vocal enough or that nonviolence was not the most effective means of inspiring change. On Thursday, Jan. 24, WFAA anchor John McCaa, Ph.D., MA ’02, explored Martin Luther King Jr.’s legacy during UD’s fourth annual MLK Day Symposium, titled “Politics, Faith, and the Media: An Interview with Dr. John McCaa.”

Moderated by Dallas Morning News Deputy Editor of Editorials and UD’s Director of Journalism Rudy Bush, BA ’97, McCaa examined whether contemporary society remembers King the way King himself would have wished; King knew, even then, of our tendency in the U.S. to deify our heroes, and he hoped that people would focus more on his ideas.

“I think the mistake we make as a society is that people try to worship Dr. King, and that’s a mistake because Dr. King was not perfect,” said McCaa.

Further, King challenged people to take a look at the things in which they professed to believe, and that did not always (or even usually) make people comfortable. King contended that we ought to live the things that we maintain to be true and right, whether these things are from the Bible or from the Declaration of Independence.

“I just want to leave a committed life behind,” said King in one of his final speeches.

Did he accomplish this, and is it what he’s remembered for?

“To those who study him, certainly,” said McCaa. “For those who are looking for a manual on how to live their lives, that’s how he’s remembered — as someone who gave us an example of how to challenge ourselves spiritually, intellectually — to limit the distance between who we profess to be and who we are inside.”

McCaa believes that King is important to what people are looking for today because his ideas remain applicable; they are permanent and lasting, because they represent truth. 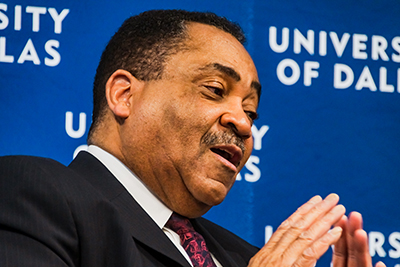 “I connect it to UD because I believe people today are looking for ideas,” he said. “Not all ideas are equal; bad ideas result in war, killing, discrimination and unfairness, so it’s necessary to debate ideas and come to the conclusion of which are the best ones, and which ones last.”

If you follow the kind of ideas King advocated, then other people’s problems must be your problems too.

“Dr. King, when remembered best, is a person who professed some ideas about what it is to be alive, as opposed to just exist,” said McCaa. “That to me is why he’s key. What he was saying is yes, I’ve got this degree, I won a Nobel Prize, but what I want you to remember is that I tried to speak out for those who could not speak out for themselves.”

Like King, McCaa believes that people, and perhaps especially college students, “should search for ideas that last a long time.”

“You always have to be worried, am I following the right path? If you do that, you’ll arrive at good choices,” added McCaa. “King preached what he thought were the best ideas he’d come across — he was constantly searching for a way to live a real, moral life.”