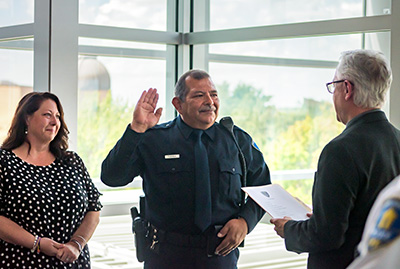 Tijerina’s wife, Patty, asked, “Is there any reason you can’t still become an officer in the UD Police Department?”

There was not a reason, so Tijerina set out to do just that, and on Sept. 10, he was sworn in by President Thomas Hibbs, Ph.D., BA ’82 MA ’83, as a University of Dallas police officer, an official part of the UDPD team. 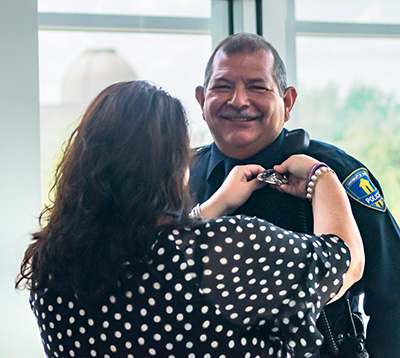 “It’s a very big honor,” said UD Police Chief Russ Greene. “It’s a very arduous process, and the licensing test is very challenging even for someone who just got out of the academy, let alone someone 20-plus years out.”

Members of the Facilities team, the CSO, the UDPD, and other campus departments, as well as CSO/UDPD student workers, Provost Jonathan Sanford, and Tijerina’s wife, daughter and son-in-law, came to watch as Tijerina made his official promise to uphold the law at UD and had his badge pinned on by Patty.

“I thank everyone for being here, thank God for helping me mentally and physically to be where I am today, thank my wife for her support, and thank everyone in the department,” said Tijerina.

“Every department needs a new rookie — even though he’s got 23 years,” said Greene.

“My husband has so much heart,” said Patty Tijerina. “Blue has always been in his blood, all 26 years we’ve been together. Our family is so proud of him for going back and fulfilling his dream.”