The front corner of his desk is buried beneath shells, large quartzes and rocks. On one side of his office tucked away on the third floor of the Haggerty Science Building, a nerf gun rests below a shelf of notebooks. And behind his desk, picturesque mountain landscapes of the many parks he’s visited over the decades decorate a tall metal filing cabinet. 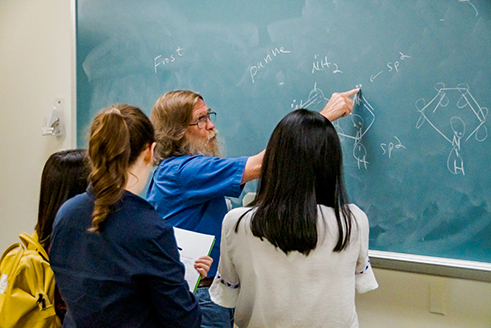 “Golly wally,” says longtime Professor of Chemistry William “Bill” Hendrickson, Ph.D. “Some of these books I’ve had since I was an undergraduate.” He reaches above his desk for one such course text, Guide to Technical Writing, from his own student days at Louisiana Tech University. “I’m gradually getting everything cleared out.”

At UD Hendrickson is loved and admired by his fellow faculty and students alike, who perhaps know him best for his slender figure and iconic grey beard resembling that of a rugged frontier explorer eager to set out on his next hike. During his 40-year tenure, he most notably instructed the university's Organic Chemistry course sequence, teaching students the study of the organic molecular compounds found in all living things.

A physical organic chemist with a specialty in the mechanisms of free radical reactions, Hendrickson helped procure more than $1 million in funding through research grants awarded to UD from the Welch Foundation and the American Chemical Society. He co-authored 15 undergraduate student publications, and also served as an adviser for the Student American Chemical Society Dallas-Fort Worth Chapter.

A former chair of the Chemistry Department and director of the O’Hara Chemical Sciences Institute for two decades, Hendrickson played a key role in a number of campus activities that continue to this day, including the annual Mole Day celebration held during National Chemistry Week on Oct. 23, where you can find students exploding oxygen and hydrogen balloons at 6:02 a.m. on the Mall. In 2014, Hendrickson was additionally named a King Fellow at the university’s annual faculty awards, recognizing his well-deserving tenure of exemplary teaching, service and scholarship at UD.

Raised in the college town of Ruston, Louisiana, Hendrickson knew he belonged in the classroom from a young age. “I didn’t particularly want a real job,” he says. “I grew up on a dead-end street, and most of our neighbors were professors. I would see these guys come home early in the afternoon and thought, hey, that looks like an easy gig. Boy, was I wrong.”

Interestingly, chemistry was neither his favorite subject nor his first choice of study in school. “What I tell most people when they ask why I’m a scientist: I would’ve preferred to have been a history professor,” he explains. “But the sciences weren’t as competitive at the time.”

Hendrickson received his bachelor’s from Louisiana Tech, after which he attended Louisiana State University, where he met and married his wife, Connie, and earned his doctorate in organic chemistry in 1974. He completed a postdoctoral fellowship at Johns Hopkins University thereafter and, before finding his way to North Texas, worked a two-year stint as a visiting assistant professor at the University of Alabama in Birmingham.

When Hendrickson accepted an invitation to teach at UD in 1979, the Chemistry Department was still housed in Carpenter Hall, where it shared a space with the Biology Department. “When I first got to UD, there really wasn’t much. ... the administration was very small,” says Hendrickson, who began working at UD the same month his son, David, was born.

“We live down in South Irving, so it takes me 15 minutes to get to work,” he continues. “We’ve lived in the same house for 40 years.”

North Texas also provided both Hendrickson and his wife with stable sources of employment and income. “We moved about five or six times in four years, and when we got to UD we said, ‘No, that’s enough,’” he says. “I came here and like a tick just burrowed in.”

“It’s been nice working in such a close department,” says Hendrickson. “These are good students … They ask good questions, and they care about learning.”

“Both of my parents were Texans,” explains Hendrickson, whose mother relocated to Louisiana sometime around the Great Depression to work at JCPenny. Two of his great-grandfathers are also buried in Denton, Texas. He adds: “I wasn’t born in Texas, but I got here as soon as I could — it just took 30 years.”

Outside of the classroom and lab, Hendrickson is looking forward to spending his leisure time visiting Texas state parks and his cabin on his 20-acre property in Bosque County. “It’s a nice two-story cabin right on the edge of a valley, located at the crest of the Hill Country,” he explains. “It’s essentially a hunter’s cabin,” he adds. “We don’t have any running water, but we have electricity.”

“We’ve got three dogs, basset hounds, so they come down and chase the armadillos,” he says.

After some time teaching at UD, Hendrickson ventured out to the New Mexico mountains, which were enticing to his love of hiking and exploring the outdoors; in the decades to follow, he visited more than two dozen state parks and 49 states in between teaching full-time during the academic year. “I’m really looking forward to being able to do things during the week again,” says Hendrickson.

The now retired UD chemistry professor already has his next adventure planned for this coming September: Yellowstone.