Meet the Class of 2022: Eagle Scout Pines for Adventure 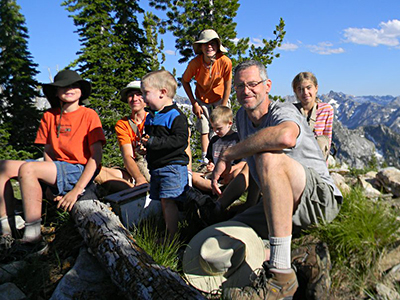 As he began his ascent up Observation Peak, the only trail-accessible peak of the Sawtooth Range of the Rocky Mountains, alongside his mom and dad and younger siblings in summer 2017, University of Dallas freshman John Rabaey could more than sense the coming summits on his horizon. His mind began racing.

It was nearly a year before he’d finish his “last-minute” Eagle Scout just shy of his 18th birthday, and months before he’d also perform in the Minnesota All-State Orchestra for his third straight year.

“As the summit loomed, my watch chimed 6 p.m.,” said Rabaey, a National Merit finalist and Presidential Scholars candidate from UD’s Class of 2022. “A giant snowdrift obstructed the switchbacks along the trailhead — but somehow we made it. … All around us, mountains jutted out of the landscape in such irrational shapes.”

The mountain, in many ways, marked just the beginning for the young adventurer. His quest certainly didn’t end at Observation Peak — from ascending the foremost “fourteener” of the Rocky Mountains, Longs Peak, to performing in the Southwest Minnesota Music Festival, to canoeing the whitewater rapids of the Yellow Medicine River, it was indeed a year of adventure.

“The muddy stream was an anomaly, a flooded creek in a land of lazy rivers and vast cornfields,” Rabaey later wrote as he began penning essays for college admissions. “We had sought it out because we, like the river, were an anomaly: an adventurous family in quiet farm country.”

Family is one of the many things Rabaey holds dear, being the eldest son with six younger siblings, all of whom still live at home with their parents on his family’s 11-acre farm in Marshall near Ghent, Minnesota. “I got a lot of emails from them during my first week here at UD,” said Rabaey, the great-grandson of Belgian immigrants who helped settle Ghent, known as the capital of the world for rolle bolle, a Belgian game of “feather bowling.”

“Mom grew up gallivanting all over the country with her father,” said Rabaey. His grandfather had shared an equal love of travel and adventure, “... and half of his grandchildren inherited the ‘maps’ gene,” explained Rabaey. “I love to look at maps to orient myself to figure out where I am.”

Rabaey’s parents met in graduate school at the University of Wisconsin, where they both earned master’s degrees in mathematics. “Mom and Dad preferred making life difficult,” he wrote. Rather than feather bowling, “They taught us to play soccer, throw a Frisbee, explore the grove, build snow forts and climb mountains.”

And at the dinner and breakfast table growing up, the Rabaey family would regularly gather to practice math equations or study flashcards.

“That’s basically how we learned math in preschool,” said Rabaey. “Whenever we had grapes or something at supper we’d always get 12 grapes, and my parents would have us divide them into piles of three, then piles of four. … Divide them. Subtract them. Multiply them. Even application problems.”

“Mom’s phonics program was also unique,” he continued. “For each letter of the alphabet, we made a poster and pasted on pictures of items that began with that letter. It worked — all of us were reading by kindergarten, except Teddy, who’s still only three. I suspect that my early reading helped prepare me to choose UD for the Great Books.”

Returning from Observation Peak to his hometown of Marshall, Rabaey readied himself for another year of orchestra camp, rehearsals and chair auditions. The coming school year, as a senior at Marshall High School, would mark his third year of public school. It was also the fifth year he’d be performing with the Southwest Minnesota Orchestra, a regional community ensemble made up of local residents, area high school students and faculty, and students from Southwest Minnesota State University.

Of his first audition for the Minnesota All-State Orchestra as a sophomore, Rabaey recalled, “To be frank, I didn’t worry too much about the audition. I knew beforehand where I would sit — right in the front of the orchestra.”

Disappointment had followed soon thereafter, however, upon learning he had placed third chair in the second violin section of the lower orchestra. This placement had rather motivated and fine-tuned his practice habits in the years to come.

“Four years, two teachers, two violins, eight summer camps, dozens of competitions and hundreds of hours of practicing later ... I found myself seated in the first violin section of the highest student orchestra in the state,” he added.

“This past year, I also got involved with a string trio and we practiced all the time, nearly every night for two hours by the end,” said Rabaey. In March 2018, the string trio performed La Folio by Vivaldi, winning second place, in fact, in the Saint Paul Chamber Orchestra Youth Chamber Music Competition.

As a sophomore in high school, Rabaey began taking dual courses at Southwest Minnesota State University. He managed to transfer a total of 32 course credits, the maximum transfer credits allowed for an entering freshman — and now here at UD, Rabaey plans to keep playing the violin as he applies his studies to complete his undergraduate coursework.

“My favorite math class was geometry — the proofs,” said Rabaey. “When I’m bored in my classes, you might see me take out a pencil and start deriving chord-chord theorems or half-angle formulas.”

“There’s definitely a connection between music and math,” he continued. “It’s amazing how many physics and math students end up playing an instrument too.”

Rabaey was also actively involved with the math and robotics team, the TigerBots, throughout his high school years. “I got into robotics because my chemistry teacher was the coach,” he explained. “I loved my chemistry teacher because she would blow things up in class just for the fun of it sometimes.”

At the moment, Rabaey plans to major in science, focusing his variety of interests in physics and computer science. “I got a D on my first physical science test,” said Rabaey. “Science was always my weak suit, which is funny since I’m planning to major in it now. Well, I’m not sure if I’m a science major; I could still be a math major,” he amended.

“I’m still discerning,” said Rabaey. “I think it would be really cool to start using math to analyze maps and then eventually design roads for a national park based on map data and lots of math and computer science.”