Meet the Class of 2023: Incoming Drama Major Will Direct, Write 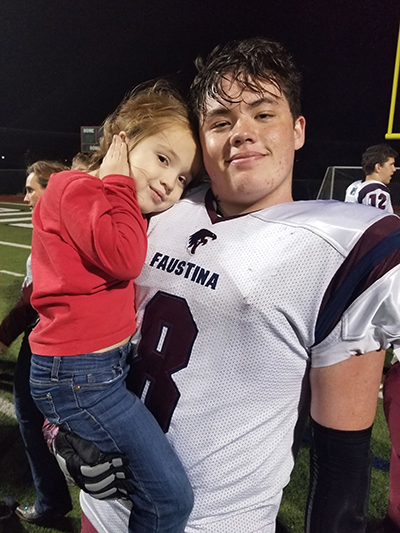 Aspiring drama (and perhaps also English) major Klemens Raab, BA ’23, has been hanging around UD his whole life, since he only lives about a mile away from the university’s Irving campus, and his parents (Klemens, BA ’00 MA ’06, and Gina (LeBaron), BA ’99) are both alumni. He’s already experienced the Rome campus, too, having participated in the summer High School Rome Program Shakespeare in Italy last year.

The oldest of six children, Raab has already been offered two jobs: the first, teaching drama at his alma mater, Faustina Academy in Irving; the second, as a screenwriter for the group leader of the mission trip he went on to India this past summer.

Ultimately, Raab would like to write and direct plays; he directed the play Forsooth! by Connor M. Foley at Faustina this past year and very much enjoyed the experience. Similarly, he is interested in making indie films and distributing his work across the world.

“As much as I would love being a drama teacher, I would enjoy actually doing it more,” he said.

For the time being, though, Raab is content, and excited, to put his career aspirations on hold in order to focus on his education at UD.

“I’m looking forward to studying the Core,” he said. “It’s really important for building a foundation as an intelligent, problem-solving person. Also, I love to read, but many of the books we’ll read in the Core I would have trouble making myself read on my own, even though I want to read them.”

His choice of major(s) wasn’t a difficult one — perhaps the hardest part is deciding whether to double-major in English. As for his high school drama days, Raab participated in many plays, including both The Mousetrap and And Then There Were None by Agatha Christie, the Gilbreths’ Cheaper by the Dozen, and Oscar Wilde’s The Importance of Being Earnest. With his noted triumphs on stage, Raab then became the first-ever student director at Faustina, with his success at that leading to his job offer.

“I worked with awesome actors, and I have a passion for plays and directing,” he said. 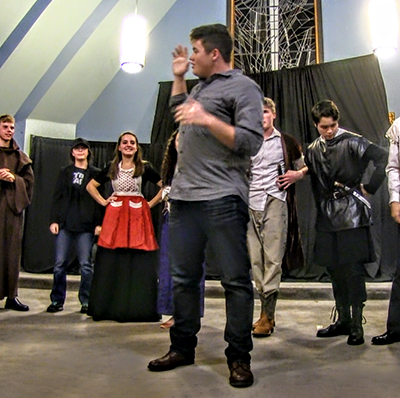 “Studying English has made me the most well-formed as a person, intelligence- and experience-wise,” he said.

Because Faustina was such a small school, Raab was reasonably free to explore his interests and participate in many other school activities as well. He was president of student council his senior year, played football all four years (captaining the team as a senior and being recognized as a TAPPS All-State player), and was a member of both Latin Club and the choir. On his own, he wrote novels and drew.

“I tried to do everything I could,” explained Raab. “At bigger schools you have to specialize.” He even played trumpet for a year in middle school — the only year the school had a band.

Reading and writing are still among his favorite activities; his short stories, however, tend to morph into screenplays.

“I have a very visual imagination and often feel, if I’m trying to write a story, that it would be way better as a screenplay,” he said.

Now that Raab’s back from his somewhat spur-of-the-moment mission trip to India (his mom woke him one morning early in the summer to ask if he wanted to go; after saying yes, he fell back asleep), he feels like his freshman year at UD can’t start soon enough. He’s even excited about living in Madonna, despite his father’s tales of lurking possums during his own time at UD.

“The value of the education here is so high, and it’s a cool environment,” said Raab. “The culture has a mindset revolving around the human perspective. I think it’s a great school, and I’m really excited to go.”

In the photos (courtesy of Raab): Top: Raab with his younger sister at a Faustina football game. Bottom: Raab directing Forsooth!