New Trustee Brings Vast Array of Experience to UD’s Board 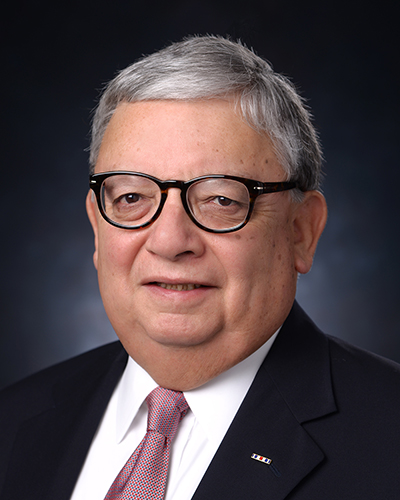 “I guess I’m a man for all seasons,” said Irving City Councilman Al Zapanta, who was elected to the University of Dallas Board of Trustees on May 31. Zapanta has had, as he explained, three different, often overlapping careers: in the military, in the private sector, and in both federal and state government and politics.

His military career began during the Vietnam War, when he was in college at the University of Southern California, where he earned a B.A. in industrial psychology and an M.A. in public administration and was a doctoral candidate in international political economics; he was in the California National Guard and started as a private, gradually moving up in rank to major general. During Desert Storm, he took a two-year military leave from ARCO to lead, as chief of staff, the Peacekeeping Mission to the United Nations Referendum on the Western Sahara in North Africa. His military record was marked with numerous awards and commendations including a Silver Star, five Bronze Stars for Valor, a Purple Heart, a Joint Service Commendation Medal for Desert Shield/Desert Storm, and 30 other awards and decorations. In 2000, he retired as Major General, U.S. Army, with 36 years of service.

Zapanta also received a diploma from the Harvard Graduate School of Business, Advanced Management Program, during his time as director of governmental affairs for ARCO. In 1986, ARCO moved him from California, where he was born and raised (he’s a fourth-generation Angeleno), to Dallas; in 1989, ARCO again moved him, this time to Washington, D.C., to head the D.C. federal office in government relations on oil and gas issues.

In addition to his various careers, Zapanta has played an active role in his community by serving as a trustee for the President Gerald R. Ford Foundation and Museum, a Tyson Foods board member, the chairman of the Irving Planning and Zoning Committee, and the board chairman of the Las Colinas Association. Currently Zapanta is president of the United States-Mexico Chamber of Commerce.

In his continuing private sector career, Zapanta is also owner/CEO of Planning Inc., a Service Disabled Veteran-owned business certified by Veterans Affairs and the Department of Defense; the company focuses on benefits and retirement for retiring senior civil servants as well as security services for the Department of Defense, Veterans Affairs, Homeland Security and other federal government agencies.

Zapanta and his wife, Rochelle, have been coming to Mass at UD’s Church of the Incarnation for 15 years now; occasionally, they take a class with the Ann and Joe O. Neuhoff School of Ministry. When he has a free moment, Zapanta likes to take fishing trips to California, where two of his children live; his son is in Pasadena, his middle daughter and her children in San Diego. His oldest daughter is here in the Dallas area in Lakewood; her daughter goes to St. Patrick Catholic School in East Dallas. His daughter attended Bishop Lynch.

Zapanta was elected to the Irving City Council in 2018 for a three-year term.

As far as his plans as a UD trustee, Zapanta is still in learning mode and needs more time to develop his understanding and appreciation of UD, but he knows he wants to make strides to more deeply connect UD to the Irving community; he also wants to bolster UD’s ROTC program and veterans’ presence. Currently, the 31 military science credits taken by UD’s ROTC students at the University of Texas at Arlington are not acknowledged on their UD transcripts. Strides are being made toward a leadership concentration that would account for 15 of these credits; the others would be noted on the transcripts in some other capacity.

Zapanta will serve on the board’s audit committee and curriculum/academic committee.

“I’m looking forward to it,” he said. “It’s an honor to be asked to be a trustee, especially in the higher-ed community.”

“Al Zapanta's commitment to our country and to public service is beyond laudable," said UD Board of Trustees Chair Richard Husseini, BS ’88. "We cannot wait to start drawing upon his experience and background for the betterment of the University of Dallas. We are so fortunate that he is joining our board.”