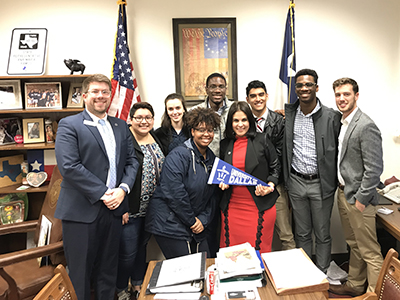 On Feb. 25 and 26, seven UD students traveled to Austin with Director of Undergraduate Admissions and Enrollment Michael Probus, BA ’12 MBA ’15, to advocate for continuing and/or increasing Tuition Equalization Grant (TEG) money. The TEG is a need-based grant awarded to students who attend a private, nonprofit college or university in the state of Texas. Ranging from freshmen to seniors and representing several majors, Chloe Athas, BA ’22, Eduardo Egusquiza-Davila, BA ’21, Celeste Gomez, BA ’19, Rachel Lara, BA ’19, Henry Obegolu, BA ’20, Prince Obegolu, BA ’22, and Max Wilson, BA ’19, are all from Texas and all recipients of this grant. They did not all know each other prior to the trip, but now they would consider each other friends.

“I got an email from UD’s Financial Aid Office asking me to participate,” explained Rachel Lara, a senior English major who’s planning to attend library school following her graduation in May. “I was very honored, and I wanted to go, but I had a lot going on school-wise so wasn’t sure if I should. I called my dad for advice, and he told me, ‘Of course you should go!’ I was super excited and nervous.”

“I was chosen based on merit because of my background and academic standing,” said Prince Obegolu, a freshman economics major who plans to attend the London School of Economics after completing the 4+1 program for his MBA at UD, then earn a master’s or doctorate there to work in the financial field. He is the last of four brothers to attend UD; his brother Henry also went on this trip. “I played the role of an advocate, basically thanking the state representatives for their hard work in making the funding for the grant possible and taking a stance for higher education. I also talked about my experience and how the grant was a pivotal factor for me going to college.”

The students were only in Austin for one night and one day, but the visit was full of new and valuable experiences and several people who were excited to meet them and hear their stories, beginning with the local alumni with whom they had dinner on Monday night: Michael Barba, BA ’10, Amber Chesser, BA ’07, Vince Terracina, BA ’91 MBA ’93, and Tan Parker, BA ’93. Following dinner, Parker, who’s a UD trustee as well as a state representative, took them on a tour of the Capitol building, culminating in an excursion up into the dome, which several of the students felt was the highlight of the tour. 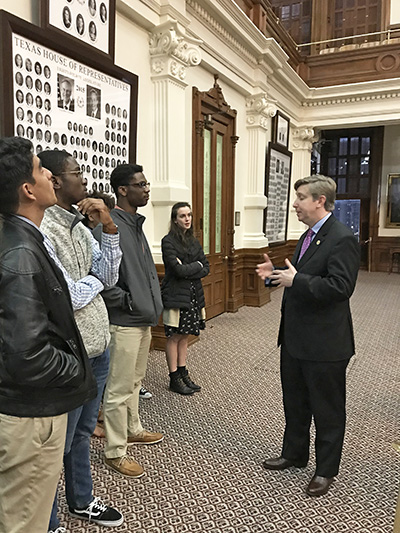 “The night tour was very exciting,” said Lara. “Representative Parker also took us to the floor, and we were able to take pictures and see the original Texas state flag.”

“It was fun, but also very informative,” agreed senior Celeste Gomez, a politics and Spanish double major who hopes to work at a nonprofit focused on immigration reform after graduation.

"It is always a great privilege for me personally visiting with college students who come to the State Capitol to advocate for various causes, especially UD students who are so well-informed and intellectually curious,” said Parker. “My interactions with these students during their time at the Capitol, from breaking bread together to a late-night dome tour, has hopefully further inspired a lifelong interest in public policy and the importance of service. As an alumnus, I am very passionate about encouraging future generations of UD students to follow a career path that embraces their enthusiasm to make a difference and also allows them to focus their time on this earth in service to others.”

The next day, the students got to see the state legislature in action.

“I didn’t quite realize the scope of responsibilities and work of a state representative,” said senior philosophy major Max Wilson, who hails from Houston and plans to go to graduate school in Germany. “You don’t hear about that on the news, just the federal stuff.”

“We got to see the House in session during one of its most hectic days, so it was very interesting to interact with politicians in that environment,” said sophomore economics and English double major Eduardo Davila. “It really gave us a good insight into what the lawmaking process is like.”

The students shared their stories with the representatives, helping the legislators to connect the TEG with actual people.

“We knew they were already supportive,” said Lara. “But our being there helped put faces to the concept — to show that there are in fact faces, that they’re supporting actual students.”

For Lara, a highlight was meeting Ana-Maria Ramos, who’s the representative for Richardson, where Lara’s family lives (although they are originally from Chicago).

“She wanted to hear what we were studying and what our aspirations are,” said Lara.

For many, including freshman art history major Chloe Athas, who commutes to UD from Garland and is one of eight children, the TEG made going to a private school like UD possible.

“We do need this,” she said. “The representatives were surprised when we came in; they thanked us for giving our time and being a voice in favor of continuing the grant.”

Other benefits of the trip included learning some of Texas’ rich history, making new friends and connections among the other students, the alumni, and the people working at the Capitol, and also getting to know some of UD’s staff and administration beyond the Financial Aid Office.

“The administration really seems to have the interest of the students at heart,” said Wilson. “They wanted to help us out.”

“It was a great experience, and I’m very glad I went,” said Athas.

In the photos (courtesy of Michael Probus):

Bottom: Tan Parker giving the students the night tour of the Capitol.