The Distinctive Look of UD

The Distinctive Look of UD 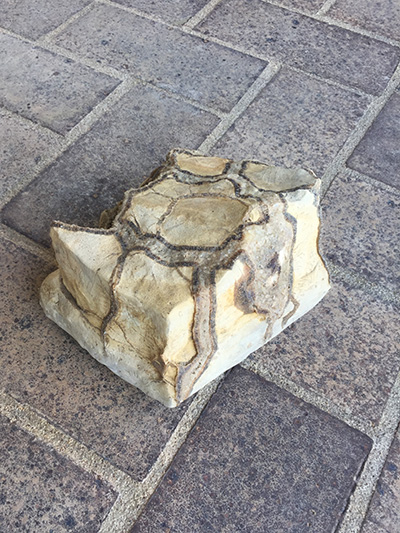 I was always puzzled by the look of UD until one afternoon several years ago. While hiking through the woods above the seminary with my family, I happened upon something extraordinary: jutting out of the ground was the corner of a rock painted with exquisite patterns.

My kids and I excavated the football-size rock, covered on one side with yellow geometrical shapes outlined with brown crystals. We stared at it in amazement: it was so intricate it appeared to be intentional, a work of art, yet it was forged from rock and crystal and buried here on this hillside. It was a work of nature.

How did it come to be?

I have learned since that it is a concretion or septarian nodule, fashioned some 50-70 million years ago, when UD was on the shore of a great sea. A lump of clay dried out, forming a network of cracks, and those cracks were filled with particles of pulverized shells. Over time the whole turned to rock.

What does it mean?

The distinctive look of UD, the brown buildings, the scrupulous patterning of the lamps and the curiously shaped church, greatly perplexed me until I saw this concretion. Like this septarian nodule, UD's campus has grown organically out of these hills, jutting forth earthy hues and geometrical shapes.

The education we provide here, like the infrastructure itself, reflects a process that took ages to complete. The core has its beginnings in the Greek literary tradition, in those texts that started to take shape some 3,000 years ago. It likewise draws upon the biblical tradition that emerges independently. And it draws too upon the 2,500 year-old Greek philosophical tradition and the sciences it spawns. These three forces grow together, filling in each other's cracks, to deliver something of truly exquisite beauty.

Our time is a time of mass production and trendiness. Many may want a campus that looks like it belongs somewhere other than Turkey Knob Hill in Dallas County, and some want an education that reflects the currents of the last few decades. What we have instead is a campus forged from the heart of this hill, and an education fashioned from the heart of the Western tradition.

Geological and historical time seem to move too slowly for us, but their results exceed our own impatient efforts to fabricate something new.

When I look to our students and see the kind of formation our education gives them, I realize too that septarian nodules didn’t just form on this hill 50-70 million years ago but in the last 50-70 years, as this education fills in the cracks in the students’ souls and the whole crystalizes into beautifully patterned stone.

There be wisdom on this hill, with its brown hues and great books.