The Idea of Our University

The Idea of Our University 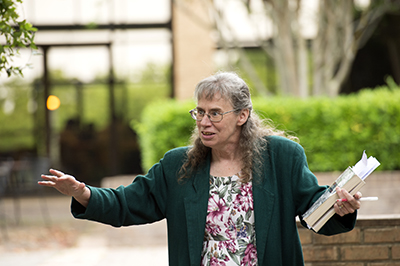 To found the famous Core curriculum of the University of Dallas, as an education "best for the individual," Donald and Louise Cowan looked to John Henry Newman's The Idea of a University. He unapologetically promotes the Western classics — precisely because so few know our own culture well enough to appreciate the depth of any other.

Students, he thought, should form their imaginations by well-tested literature, with images of the noble and great before their minds. Material meant merely to stir addictive passions narrows rather than enlarges the mind. But the classics must be studied thoroughly in all the strangeness of their contexts, and their effects upon our culture.

Newman wrote philosophy, theology, history and even novels — but he wanted to focus each student's mind to "to digest, master, rule and use its knowledge, to give it power over its own faculties, application, flexibility, method, critical exactness." The methods of the various disciplines enable students to enjoy relating ideas to one another and testing those connections in new contexts. Shallow multiculturalism, he thought, misses the interconnections, leaving "a mass of undigested knowledge."

Miseducated students today often judge other cultures by 21st century American values. Worse, they may be helpless to distinguish differences in fashion from fundamental disagreements — or fads of the current news cycle from real problems. A University of Dallas literature or politics professor can confidently refer to theological or historical issues, to philosophers or artists or economic theorists. Scientists are expected to write, and to understand the imaginative aspects of their disciplines. Debate proceeds civilly, often on a philosophical level.

The University of Dallas has various departments, rather than a single unified curriculum. "An assemblage of learned men, zealous for their own sciences" as Newman recommended, who "learn to respect, to consult, to aid each other." Newman explains, "A habit of mind isformed which lasts through life, of which the attributes are freedom, equitableness, calmness, moderation and wisdom."

Each fits into its proper context, and judges with the principles of its own science. None is allowed to be a law unto itself or a tyrant to others; theologians, economists, political scientists, biologists and all the others defend their viewpoints. Academic integrity umpires the rivalry; no discipline is silenced. Neither mere egotism nor personal prejudices can substitute for evidence and reason. Newman considered this mutual respect to constitute a "science of the sciences." He himself most respected the discipline of theology, in its promotion of the primacy of conscience and its wide view of a world that makes sense under a rational God, balancing realities that are physical, moral and spiritual at once.

A balanced circle of sciences challenges each discipline to recognize higher values than survival, or power, or partisanship. Rather, all admire "the magnanimity or self-mastery, which is the greatness of human nature." Newman's ideal university does not produce a certain type of social arrangement, serving some political or personal end; it forms philosophical minds to work freely on any problem.

Because the university is Catholic, its members acknowledge God's call to care for their neighbors — and first of all to consider their obligation to speak and hear the truth among their fellow students and professors. Rather than disinviting those who hold opposing views, or shouting them down, students learn to logically challenge their ideas in relation to their own thoroughly examined tradition. No "free speech area" needs to be defined, and no political views must be quashed. The student body is mainly Catholic, but, with a robust grounding in reason and their own culture, they can debate opposing viewpoints without fear — albeit not perfectly in all cases, but with growing maturity. The University of Dallas has prospered by embracing the ideal of Newman's university.