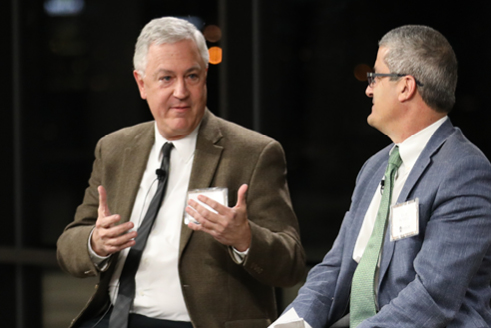 The University of Dallas Board of Trustees announced today that it has selected Thomas S. Hibbs, Ph.D., BA ’82 MA ’83, to serve as the university’s ninth president. The first alumnus of UD to be president, Hibbs has served as dean of the Honors College and distinguished professor of ethics and culture at Baylor University since 2003.

“We are extremely pleased to have Dr. Hibbs as our ninth president at the University of Dallas. Dr. Hibbs brings all the tools for a successful presidency. He is a phenomenal leader, a builder of complex programs, a prolific fundraiser, an academic and a scholar who has a great appreciation for the Core and for how a rigorous Catholic liberal arts education benefits not only the graduate, but society at large,” said Chairman of the Board Thomas Zellers, M.D., BA ’79. “I anticipate he will be a great role model for faculty, staff and students and will invigorate and sustain a collaborative and respectful culture on campus.”

“I am humbled and honored by this appointment, which allows me to return to the university where I first learned what Catholic liberal education is all about,” said Hibbs. “My experience at a number of other academic institutions since I left UD has only confirmed in my mind the distinctive and indispensable role of the University of Dallas in the landscape of American higher education and in Catholic education across the globe. I am especially honored to be joining a university with such a well-earned reputation for excellence in teaching, at the center of which is a faculty that combines scholarly achievement with devotion to the craft of teaching.” 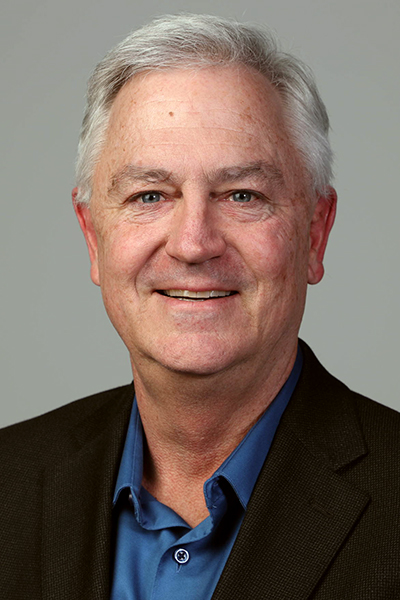 “We are truly blessed to have Dr. Thomas Hibbs return to his alma mater as president. His educational history as a student, a professor and an administrator at top Catholic universities throughout our land and most recently at Baylor University is absolutely exceptional. I look forward to working with him and welcoming him into his role as president of the University of Dallas,” said Bishop of the Diocese of Dallas and University Chancellor Edward Burns.

"Being an alumnus and having been in higher education continuously since graduating from UD, I feel like I have a very good sense of where UD fits in the higher education sphere and the special, distinctive role it plays,” said Hibbs. “I know the culture and how students can be formed by it, as I certainly was during my years in Irving. I look forward to working closely with students, faculty and administrators across the university community, and with the board, parents, alumni and benefactors, to build a University of Dallas that will flourish for generations to come.”

Hibbs received a B.A. in English and an M.A. in philosophy from UD and both a master’s and a doctorate in medieval studies from the University of Notre Dame. He was a tutor at Thomas Aquinas College for three years before moving to Boston College, where he taught for 13 years as full professor and chair of the philosophy department.

“Tom Hibbs is one of the finest Catholic educators in America: a first-rate intellect wedded to administrative ability and a deep commitment to the church,” said George Weigel, distinguished senior fellow and William E. Simon chair in Catholic studies at the Ethics and Public Policy Center, as well as the father of two UD alumnae. “UD couldn’t have made a better or more exciting choice of president.”

Baylor’s Honors College, of which Hibbs is the inaugural dean, includes four programs with more than 1,300 students, 35 full-time faculty members, and an endowment in excess of $15 million. During Hibbs’ tenure, the Honors College’s largest program, the Honors Program, witnessed a threefold increase in retention. The college includes a residential facility with 320 students, on-site faculty offices, a faculty-in-residence, and a chaplain-in-residence. Since 2014, Hibbs has also served Baylor as director of its programs in Washington, D.C., coordinating student internships, a religious liberty initiative with Georgetown University and monthly faculty events.

“The University of Dallas is getting an outstanding leader in Dr. Hibbs,” said Baylor University President Linda A. Livingstone, Ph.D. “I have greatly appreciated his vision and leadership of our Honors College and Baylor in Washington initiative, and he will be deeply missed by students, faculty and staff across our campus. We wish him well as he joins a long list of individuals with Baylor ties who serve as top executives at colleges and universities worldwide.”

Hibbs’ wife, Stacey Hibbs, Ph.D., also teaches at Baylor; the couple currently co-teach a capstone class on friendship. They have three children, two of whom are Baylor alumni and one who is studying international relations at Baylor. Their oldest daughter participated in UD’s Arete high school summer program, where she had the opportunity to take a class with the late University Professor Louise Cowan; this experience was determinative, Hibbs says, in her decision to study philosophy and literature in college.

“Tom Hibbs is an inspired choice for the University of Dallas. It’s not often that a university can choose as its leader a real philosopher who has years of experience running first-rate programs in higher education. Tom is also a public intellectual whose observations on contemporary affairs are often more interesting than the culture he is analyzing,” said Catholic University of America President John Garvey. “Add to this his considerable personal charm, and the fact that he is a father of college students of his own, and you have the formula for the ideal college president. I congratulate his alma mater on selecting him.”

Hibbs has spent quite a bit of time in Dallas over the years, especially for early screenings of movies; he has also visited the UD campus regularly and delivered the annual Aquinas Lecture in 2009. As an added bonus, his son, an accountant, will soon be working for a firm in Dallas.

“It will be a wonderful thing to be in Dallas,” said Hibbs.

Hibbs has spent most of his career writing, teaching and designing/implementing academic programs; he has 30 published academic articles, and two are forthcoming. He has written, edited or provided introductions for 12 books. including three on the thought of Thomas Aquinas. He has also written more than 200 movie reviews and dozens of essays and book reviews for publications such as National Review, Catholic World Report, First Things, The Weekly Standard and others.

As an undergraduate at UD, Hibbs certainly never foresaw one day being president of the university, but beginning with his role as department chair at Boston College, he began to see how he enjoyed the administrative side of higher education in addition to teaching and writing.

“On behalf of the search committee, we are very excited that Dr. Hibbs will be joining UD as its next president. We had the good fortune of considering many exceptional candidates for the position, and Dr. Hibbs distinguished himself by his extraordinary dedication to and articulation of UD's mission, as well as by his proven track record of leadership in higher education and success with major fundraising initiatives,” said Search Committee Chair and Vice Chairman of the Board Richard Husseini, BS ’88. “Under Dr. Hibbs’ leadership, UD is well-poised to recognize its potential as the premier university of the Catholic intellectual tradition. We could not be more pleased to welcome Dr. Hibbs back to his alma mater as our next president.”

Hibbs will begin in his new role July 1 on a campus that has experienced significant growth recently. In the past several years UD has seen its largest incoming undergraduate class, its highest overall enrollment, the introduction of multiple new academic programs, and AACSB accreditation of the Satish and Yasmin Gupta College of Business. Additionally, the university has expanded its Rome, Italy campus, leveraged a real estate sale to boost its endowment by 27 percent, and invested more than $32 million in new buildings and athletic facilities.

“Dr. Tom Hibbs is a prolific scholar, an engaging teacher and a genuine servant leader. He consistently enables and empowers faculty and has always been the go-to leader for championing innovative new ideas that lead to transformative education and character formation,” said Lori E. Baker, Ph.D., vice provost for strategic initiatives, collaboration and leadership development at Baylor. “Ultimately, Christian mission is at the heart of Dr. Hibbs' decision making and I am excited to see how his faithfulness and dedication will inspire the faculty, staff, students and alumni at the University of Dallas.”

The Liberating Power of the Humanities

College Kids Get Brains, No Soul