A rebirth of lifelong learning is flourishing under the instruction and embrace of a collective “brain trust” of UD faculty, which Provost Jonathan J. Sanford, Ph.D., guides from the third floor of Cardinal Farrell Hall. 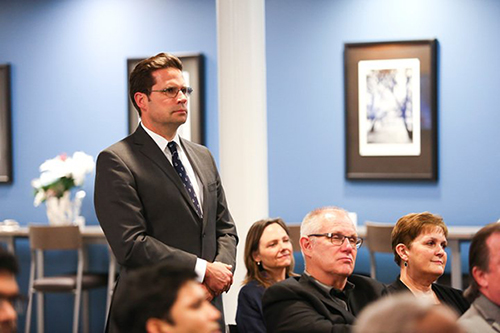 The new faculty-inspired initiative, Liberal Learning for Life, developed as most scholarly ideas do — as a collective germination of thoughts and discussions eventually leading to its complete fruition. “I was trying to decide where to start — literature, science and faith, something interesting,” says Sanford, sitting behind his desk, attempting to recollect the moment everything came together.

“The heart of what happens at UD is what takes place in the classroom. You’re living to know, and you’re living to love, and through the education you receive here, you have the capacity to live a life of genuine freedom.”

A nationally recognized ethics scholar, Sanford came to UD with a clear mission in mind: to help shape the vision of Catholic higher education at the University of Dallas. “We are taking the best of what we do with our students here on our campus and sharing it with alumni and old friends, as well as with new friends who don’t know us yet, providing them with serious, significant, enriching intellectual formation,” he says.

“Intellectual formation does not take place in a vacuum. We are social beings,” explains Sanford. “We want people to get together and share ideas. The heart of what happens at UD is what takes place in the classroom. You’re living to know, and you’re living to love, and through the education you receive here, you have the capacity to live a life of genuine freedom.”

One can trace the first incarnations of Liberal Learning for Life to Sanford’s deanship of Constantin College, which began in 2015. “I was already working on establishing a center for Catholic social teaching,” recalls Sanford; for this project, he designated alumna Sister Jane Dominic Laurel, O.P., as an instructor.

Sanford and Sister Jane Dominic began brainstorming the idea further with a group of faculty including Greg Roper, Ph.D., BA ’84, Matt Walz, Ph.D., Susan Hanssen, Ph.D., Gerard Wegemer, Ph.D., and Ron and Kathryn Rombs, both Ph.D. “Those were the faculty who initially got pulled in one way or another to the project, and they encouraged other colleagues to join as well,” says Sanford.

Around the same time, after speaking with UD alumni, Sanford developed the Constantin College Advisory Council, a short-lived but fruitful effort that further enriched the final metamorphosis. “I was familiar with some of the ways other universities have built lifelong learning components, and in thinking what would be unique to UD ... the first person I reached out to, to be a member of the council, is a man by the name of Dr. Thomas Hibbs,” says Sanford. The two philosophers had met a few years prior at a dinner ceremony in Dallas hosted by the National Review Institute, where a scholarly kinship formed and a shared pursuit to transform Catholic higher education took shape.

Though the Constantin College Advisory Council had only one meeting due to Sanford’s promotion to provost, the encouragement and financial support from the gifted group of alumni and friends of UD helped launch the four-course series later named Studies in Catholic Faith and Culture. “I didn’t have Studies in Catholic Faith and Culture in mind at that time — I was talking about ways to promote liberal learning, and ways to change the culture through liberal learning,” says Sanford, who sketched the initial curriculum covered in the four courses.

“The Studies in Catholic Faith and Culture series captures who we are in terms of the Catholic tradition, the Catholic faith and liberal learning,” he explains. “It is an expression of our effort to try to live out faithfully our commitment to rebuild our culture, and pro- mote the good of our church to our country and the wider community.”

As new cohorts meet in schools, parishes and private homes across the country, Studies in Catholic Faith and Culture just celebrated the completion of its second course, “The Person: Tradition and History.”

Two of UD’s newest faculty, Affiliate Assistant Professor of English Shannon Valenzuela, Ph.D., BA ’00, and Affiliate Assistant Professor of English Michael West, Ph.D., BA ’06, are aiding the completion of courses three and four of Studies in Catholic Faith and Culture. “We have a faculty brain trust that we work with to help give shape,” says Valenzuela. The program enables alumni and friends of UD to re-engage with the questions, texts and faculty that animate the core of the undergraduate experience. 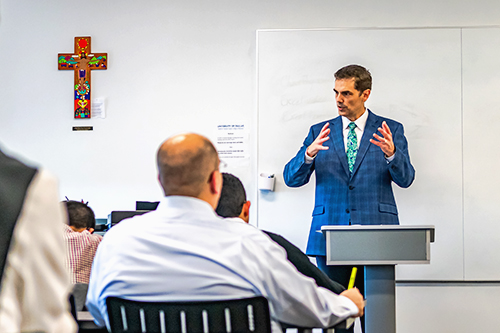 The second (and newest) component of Liberal Learning for Life is Arts of Liberty, founded by Braniff alumnus Jeffrey Lehman, MA ’99 PhD ’02, whose “interdisciplinary quest” is always ongoing and, as it happens, brought him home to UD — the place where he says it all began.

“When I was studying here at UD, one of the things that struck me most was the intense, deliberate interdisciplinary character of the course of study,” recalls Lehman, one of the newest additions to Braniff’s Classical Education faculty, conversing over coffee on the Cap Bar patio. “Both faculty and students were serious about having the disciplines enter into dialogue with one another.”

He specifically remembers an Institute of Philosophic Studies course on Plato and Aristotle that was co-taught by philosophy professor Janet Smith and politics professor (and one-time provost) John Paynter.

“What I found fascinating about the course was that both of them were reading Plato’s Republic and Aristotle’s Ethics with great care — and yet they came at it from very different vantage points,” says Lehman. “When their respective readings came into contact, that’s when the lights came on ... Drs. Smith and Paynter modeled how to disagree with one another in a cordial, illuminating way, and so they didn’t feel any need to agree on everything; this productive disagreement brought out things in the texts that I would’ve never seen otherwise. Their passionate, well- reasoned dialogue set me on a quest of trying to allow the disciplines to speak to one another in a wholly integrated way.”

This interdisciplinary quest seems more important now than ever.

“There is a renaissance in classical education that’s happening right now,” explains Lehman. Among other things, this renaissance has been fueled by a desire to reestablish intellectual freedom, a freedom that has been challenged and often compromised by technology and the media these past few decades.

“The reason why the liberal arts are called ‘liberal’ is because they each contribute to liberating the minds and hearts of learners. Liberal education as a whole trains us to be free in our thoughts and to order our passions so that we may become fully human,” he says.

As classical charter schools expand at a rapid pace across the country, other parts of the world are also expressing an interest in the liberal arts and liberal education, and Lehman has firsthand accounts to attest to this. “Among the many success stories, there are two that I like to share,” he says.

One of these stories is from John Paul the Great Junior College in Belize. The junior college approached Lehman to build its liberal arts core curriculum after some of the college’s faculty commended the Arts of Liberty website (artsofliberty.udallas.edu). Lehman spent the next several months conversing with college faculty and administrators via email and phone. Not long after this, another academic institution, in South Africa, also reached out to him. “They were developing an alternative undergraduate education program that involved distance learning, yet they were deeply committed to the liberal arts and liberal education,” he explains. The curriculum from Arts of Liberty helped both of these institutions transform their noble commitments into concrete realities.

“In classical education you’re not simply filling minds with facts; you’re creating a community of learners who want to cultivate and to pass on an intellectual tradition.”

As a classical educator himself, Lehman describes his passion to provide intellectual formation for future educators. “While the renaissance involves more than just teachers and administrators, they’re absolutely crucial,” he says. “In classical education you’re not simply filling minds with facts; you’re creating a community of learners who want to cultivate and to pass on an intellectual tradition.”

Through the Arts of Liberty and other Liberal Learning for Life initiatives, this type of community might begin at UD and organically spread outward. Lehman concludes, “I’m hoping that Arts of Liberty can becomes a natural outworking of UD’s commitment to bringing people together in pursuit of the true, the good and the beautiful.”