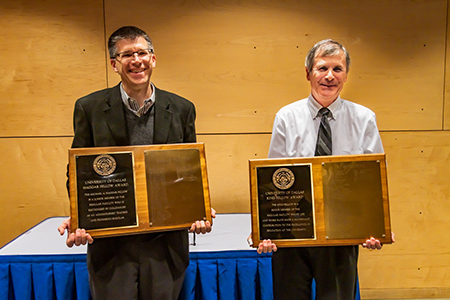 “The scale of the Mall is just right for a dragon … We get reminders of its destructive power, with the necessity of smoothing out the Mall from time to time,” said Professor of Psychology (and 2018 King Fellow) Robert Kugelmann as he presented his address, “Past and Future at the University of Dallas: The Roadrunner, the Snake, and the Treasure,” to his colleagues during the 34th King/Haggar Faculty Award Ceremony.

“Nevertheless, the dragon as an imaginary creature supports our movements across campus daily. It is our foundation. It calls to mind the foundation of our university in the imagination,” Kugelmann continued.

Indeed, just as the Braniff Mall ingrains the foundation of UD into our imaginations, so too do the faculty instill in the students the foundations of Western civilization, from the Greeks and the Romans to our own more immediate heritage here in the United States.

“Those of you who envision many years to come here, cherish what has been but do not hoard the treasure. The dragon in us may tempt such hoarding, freezing the vision of this place. When that happens, slay the dragon. Be heroic. Renew the treasure by imagining the life of the mind and of the persons who walk these hills in forms beyond our present forms.”

In 1981, the Carl B. and Florence E. King Foundation and the Haggar Foundation helped create the King/Haggar Faculty Development Endowment, which made both the King Fellow and Haggar Fellow Awards possible and included funding for summer research stipends. Each year since 1985, UD’s esteemed faculty members have gathered for the prestigious awards ceremony to recognize and honor fellow faculty who have gone above and beyond in their commitment to the university and to their students. Both awards, which are selected by the faculty development committee from faculty nominations, are considered the highest faculty honors, and recipients must have made significant contributions to the university through scholarly work and excellence in teaching and as exemplary colleagues.

Associate Professor of Theology Mark Goodwin, Ph.D., who is “frequently called upon to serve the greater interests of the university,” was named this year’s 2019 King Fellow, which honors a senior faculty member with more than eight years of service. Goodwin’s various titles and administrative/academic appointments, including former dean of the Neuhoff School of Ministry, throughout his years of service show the great extent of his commitment to the university. 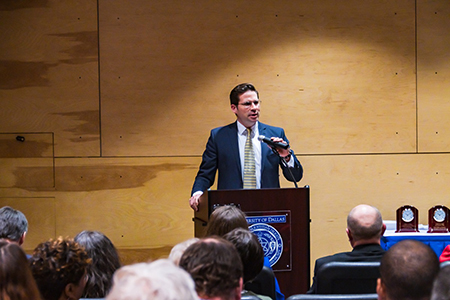 Of Goodwin’s King Fellow nomination, according to Provost and Professor of Philosophy Jonathan J. Sanford, Ph.D.: “This teacher and scholar is known for a very unassuming, humble disposition. His service to the university community is extensive and significant. … Furthermore, he is a man of great faith, piercing intellect, and deep compassion.”

Described as “the model of a gentleman scholar and professor,” the university’s 2019 Michael A. Haggar Fellow, awarded to a junior faculty member with eight or fewer years of service, is Associate Professor and Graduate Director of Philosophy Chad Engelland, Ph.D. This professor has served on numerous faculty-appointed committees and dedicated himself to running the university’s Philosophy Colloquium for several years, enlivening our campus’ intellectual life with a much more interdisciplinary focus.

“It would be difficult to find anyone at UD—indeed, anyone anywhere—who has accomplished more in the first five years of teaching, research, and service at an institution,” said Associate Professor of Philosophy and Chair of the Faculty Senate Matthew Walz, Ph.D., of Engelland’s Haggar Fellow nomination. 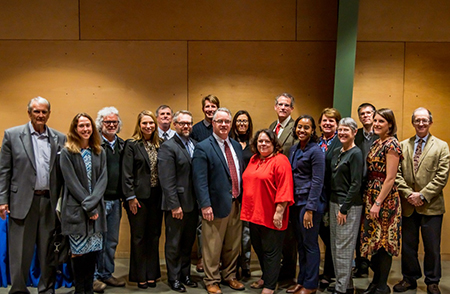 The 2019 Haggar Scholar Awards, which provide faculty research funding, were presented to:

The 2019 Haggerty Teaching Excellence Awards — supported and made possible by the Patrick & Beatrice Haggerty Foundation and determined by student and alumni votes — recognized the following faculty for their dedication to and excellence in teaching: 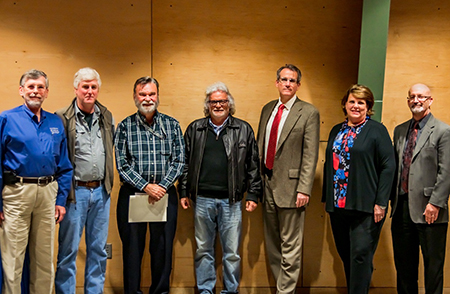