UD in the Community: From History Student to History Teacher 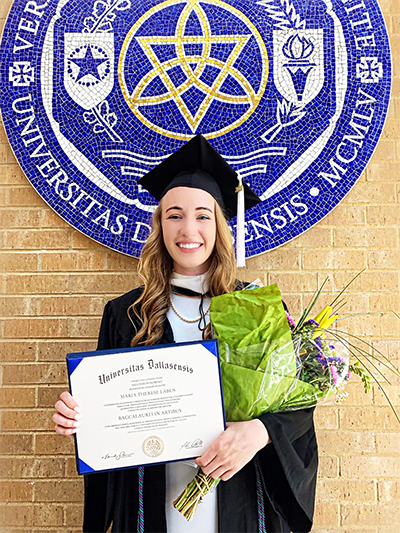 In the 63 years since its founding, UD has put down roots and grown into this shifting Irving soil in more ways than current students or far-flung alumni often realize: Irving is increasingly populated by alumni, faculty, staff and their families. In various Irving neighborhoods (and Irving is much bigger and more diverse than many students probably realize), in businesses, in schools, in churches, in other organizations throughout the city: there you will find UD. In “UD in the Community” stories, we explore these connections.

When Maria Labus, BA ’19, received a letter from UD on her birthday her junior year of high school, it wasn’t clear whether it was targeted marketing or fate — perhaps the latter, because she ended up here in Irving. Having recently graduated in the Class of 2019, this UD history major has just begun teaching seventh-grade Texas history (despite being from Charlotte, North Carolina) at Travis Middle School in the Irving Independent School District.

After receiving that initial letter, Labus flew to UD to visit. Being from a public high school, the Catholic community particularly appealed to her, as did the general air of extreme friendliness: “It was like being at Disney World; everyone was super nice,” she said.

Once she had sat in on one of Associate Professor of History Susan Hanssen’s American Civilization classes, she was basically sold, especially when figuring in UD’s scholarship package and the Rome Program. Having fallen in love with history in middle school, she very much enjoyed exploring the different classes in her major once she had completed the Core, and she developed a particular fondness for medieval history, eventually writing her thesis on the Black Death.

In the midst of writing this thesis during the fall of her senior year, Labus was working in the Office of Student Affairs, where she served as an Orientation Coordinator and masterminded TGIT; she was also a senior Charity Week co-chair (she had co-chaired her junior year as well). Further, she interned for the Resident Hall Association for the east (boys’) side of campus, helping to plan events, in addition to editing social media for The University News and planning the Fall Brawl. Her junior year, she had been part of a team tasked with reinventing the spring traditions of Laissez-Fair and Mallapalooza; ultimately, she and her team combined these events to create the new tradition of PrimaFaira, which Labus then coordinated as the team leader her senior year. All of this event planning led to the development of connections in the Irving community.

Further, Labus did her student teaching at Travis, the same school where she’ll be teaching this coming year.

“It’s a Title I school, so the student body is basically 100% underprivileged or disadvantaged,” she explained. “I fell in love with the community there, and I learned how much these students need: You have to build relationships with them and provide a lot for them; for example, I would have snacks in the classroom for when they got hungry toward the end of the day.”

“The job doesn't stop at 3:45 when everyone is dismissed,” she added. “I am constantly staying after school or coming in early so I can be there for them whenever they need me. It is quite a challenge working with a multitude of obstacles, but I can see the great worth of working here when a student begins to succeed and thanks me.”

Labus is looking forward to continuing to be part of this community at Travis as well as the greater Irving community.

“I fell in love with Irving, too,” she said. “There are so many UD alumni here, several who have businesses in Irving or nearby (Lamberti’s, Celestial Beerworks and Peaberry Coffee, to name a few), and who have settled their families here.”

While teaching, Labus also plans to pursue her Master of Arts in Teaching here at UD; Assistant Professor of Education Carmen Newstreet, Ph.D., has encouraged her along this route.

Labus hopes to inspire in her students the same love of history that was instilled in her as a middle schooler, which helped guide her on her journey to and through UD. Perhaps, one of them will even one day receive the Suhail “C.C.” Hameed History Scholarship.