UD Partners with Irving ISD, Donating Over 1,500 Copies of 'All the Light We Cannot See' 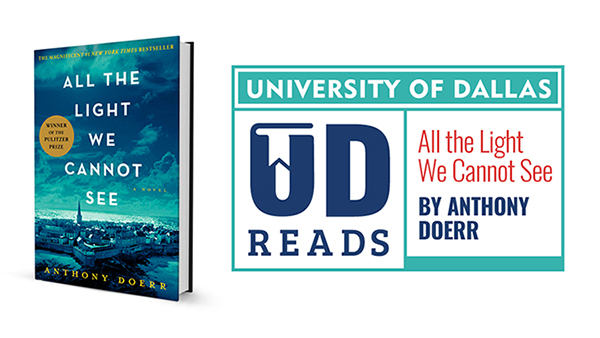 In collaboration with the Diocese of Dallas and Irving ISD, this year marks the start of a new university-wide reading initiative, UD Reads, at the University of Dallas. In an effort to encourage the message of reading, this collaboration allows more than 4,000 Irving-area high school and middle school students to experience Anthony Doerr's Pulitzer Prize-winning novel, "All the Light We Cannot See." The donated books were delivered before the start of the 2018 fall semester.

Administrators in the Irving ISD and Irving Catholic schools in the Dallas Diocese have encouraged their faculty to incorporate the novel into their English curricula. Teachers have also encouraged students to attend the author's McDermott Lecture in March. During the course of the 2018-19 academic year, the university is sponsoring a series of lectures, art exhibits, panel discussions and other activities in association with the program, culminating in Doerr's visit as the 2019 Eugene McDermott lecturer.

The novel has found its way beyond the English classrooms into social study and science curricula in some area schools. Some creative teachers have collaborated and developed cross-disciplinary curricula to support the novel.

"There are few dioceses that can boast a Catholic University, and fewer still that can connect with the university in a meaningful way within the Catholic Schools," commented the superintendent of the Diocesan schools Matt Vereecke. "We are very thankful to have both with the University of Dallas."

"All the Light We Cannot See" has spent more than three and a half years on The New York Times bestseller list. The novel was additionally praised on more than a dozen year-end lists, including Barnes & Noble, Slate, NPR's Fresh Air, Entertainment Weekly, The Guardian, Kirkus, The New York Times, The Washington Post and The Christian Science Monitor.

"All the Light We Cannot See" brings Doerr's keen naturalist eye and his empathetic engagement with humanity's largest questions to the parallel stories of Marie, a blind girl living in occupied France, and Werner, a German orphan whose extraordinary mechanical abilities earn him a place among the Nazi elite.

Tickets are currently on sale for UD's McDermott Lecture at udallas.edu/McDermott. The event will be held at the Morton H. Meyerson Symphony Center, 2301 Flora St., Dallas, Texas, on Tuesday, March 5, 2019, at 7:30 p.m.