As UD students shine in their academic pursuits, so too does the university’s prestige among the country’s elite academic institutions. 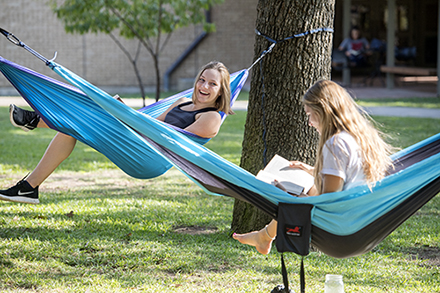 The University of Dallas earned high marks of excellence recently from leading publications, including the 2020 edition of The Princeton Review’s The Best 385 Colleges, the annual listing of “America’s Top Colleges” by Forbes, Kiplinger’s “Best College Values” and more. UD was also named among the “Best Colleges for Your Money” by Money magazine earlier this month.

“Unlike many schools, even many Catholic schools, that have abandoned their commitment to Western civilization, the University of Dallas maintains its rich core curriculum, grounded in the beauty and wisdom of the Catholic intellectual tradition, the culmination of which is a semester in Rome on our own campus,” said President Thomas S. Hibbs, Ph.D., BA '82 MA '83. “We continue to believe — and the placement record of our students confirms — that this is an education worthy of pursuit for its own sake and for its demonstrated practical results.”

The Best 385 Colleges identifies UD among the best institutions at which to receive an undergraduate education, naming the university a “Best Value College” among 127 "Best Western" regional institutions with several other notable distinctions:

Recognized for “a high-quality education at an affordable price,” UD earned its placement among Kiplinger’s “Best College Values,” ranking among 400 of the nation’s top value institutions as determined in annual listing, including Kiplinger’s “Best Values in Liberal Arts Colleges,” making UD one of only three private Texas schools to make the list.

Earlier this month, Money magazine declared UD among "more than 700 of the nation's best-performing colleges" in its 2019-20 ranking of the "Best Colleges for Your Money." According to the rankings methodology: “These schools deliver a superior education at an affordable price, enabling graduates to avoid heavy debt and to succeed in the workplace.”

Adding to the university’s list of recent notable accolades, UD was one of 26 colleges or universities recommended in the 2019-20 edition of The Newman Guide, produced annually by The Cardinal Newman Society, for its strength of Catholic identity and academic excellence, with an emphasis on undergraduate education. As the guide states: “The University of Dallas is a premier Catholic university in the United States.”

UD also received a number of rankings for its online programs in the Satish & Yasmin Gupta College of Business and the Ann & Joe O. Neuhoff School of Ministry, earning the institution:

Since July, the university has been included on multiple "best college" lists, among these the 2020 Fiske Guide to Colleges — marking the 12th consecutive year of UD’s inclusion alongside more than 300 of the “best and most interesting” colleges in the country — and the ranking publisher College Consensus, which named UD among the Best Catholic Colleges for 2019 and (for the third consecutive year) among the Best Colleges in Texas for 2019.

By Megan Wagner, MH ’16 University of Dallas junior Samiyah Davis started the nonprofit Confidence Rules out of personal experience, having walked with a dear friend through a difficult time...

The University of Dallas is proud to host the first-ever JPII Conference organized by St. John Paull II Teaching Fellow Ryan T. Anderson, Ph.D., in collaboration with the American Public...