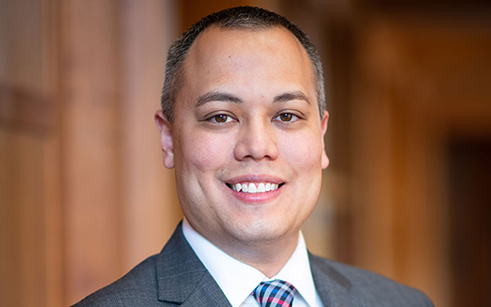 The University of Dallas is pleased to announce the appointment of Jason Wu Trujillo as its new vice president for university advancement. He will be responsible for providing key visionary leadership in the planning and directing of all philanthropic initiatives to support and enhance academic excellence at the University of Dallas. Trujillo currently serves as chief development officer and director of the Honor the Future campaign at the University of Virginia (UVA) Law School Foundation, which conducts alumni relations, external affairs, fundraising and endowment management for the benefit of the UVA School of Law. He begins his new role at the end of June.

"The spiritual (and physical) warmth of the University of Dallas beckons. ... As UD welcomes its ninth president, philanthropy will be critical to advancing UD's strategic priorities, and I am honored to serve as UD's next vice president for university advancement."

"The spiritual (and physical) warmth of the University of Dallas beckons," said Trujillo, an experienced fundraiser and administrator in higher education. "As UD welcomes its ninth president, philanthropy will be critical to advancing UD's strategic priorities, and I am honored to serve as UD's next vice president for university advancement."

In his current role, Trujillo is responsible for preparing and executing a campaign that has raised a record $200 million during its quiet phase ahead of a public launch this fall. UVA Law's priorities include faculty support, scholarships and loan forgiveness, as well as an unrestricted endowment. Trujillo has helped make broad and deep support a hallmark of UVA Law, which notably holds the No. 1 alumni giving rate among law schools nationwide as well as the fifth largest endowment in legal education.

"I am thrilled that the University of Dallas has been able to attract such an outstanding member to the leadership team," said Trustee Bridgett Wagner, BA '81, vice president of public promotions at The Heritage Foundation. "Jason understands the importance of building strong relationships with alumni and strong networks of support to achieve great things. He is an energetic manager and mentor, a devoted husband and father, and a good friend who has had a long interest in UD - an interest he says was first sparked by the outstanding UD alumni he encountered at the University of Virginia School of Law."

Trujillo earned his bachelor's degree from the College of New Jersey in 1998 and his law degree from the University of Virginia School of Law in 2001. "Since meeting many UD graduates, I have come to appreciate the rigorous Catholic liberal arts education that UD provides," he said. "Graduates of UD are universally well-prepared for a life of consequence. More importantly, UD alumni also have a love of learning and a deep appreciation for the intrinsic ends of a liberal education - two invaluable qualities that are all too uncommon."

"Jason does not ask for recognition or any sort of status. Instead, he quietly builds community," she continued. "We students go to him for advice because we know he genuinely cares, not only about our academic success but also, and more importantly, about our spiritual growth."

"UD is a singular institution in the landscape of American higher education and indeed Catholic higher education. I firmly believe in President Thomas Hibbs' vision for UD's future and am committed to helping him realize that vision by increasing our philanthropic support and building our national reputation," said Trujillo.