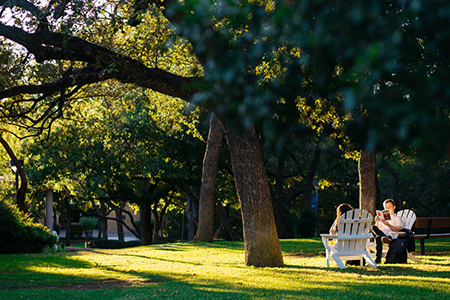 As other colleges and universities struggle to advance institutional rankings, the University of Dallas climbed seven spots over last year’s placement in the 2020 edition of U.S. News & World Report's Best Colleges, reinforcing its placement among the nation’s top universities. Adding to the university's list of recent accolades, UD was also awarded an “A” grade among only 22 institutions nationwide to receive the standout report in the 2019-2020 edition of What Will They Learn? published by the American Council of Trustees and Alumni (ACTA).

Advancing last year’s No. 14 ranking to No. 7 among 128 of the Best Regional Universities in the West, UD additionally earned credit as the No. 5 highest-ranking "Best Value" institution in the region. The university also earned distinctions in several other categories, including “Best Undergraduate Teaching,” “Best Undergraduate Business Programs,” “Most International Students” and  “Highest 4-Year Graduation Rate.”

U.S. News & World Report ranks schools based on categories created by the Carnegie Foundation for the Advancement of Teaching. The "Best Value" category takes into account the academic quality of the institution and the average amount of need-based aid provided to students.

UD was one of only four Catholic institutions in the country to earn an “A” in the annual college guide by ACTA, which determines its grading scale based on a college’s curriculum of seven essential subjects: literature, foreign language, composition, U.S. government or history, economics, mathematics and natural science. ACTA’s Council of Scholars identifies these disciplines as critically important to a 21st century college education, and each of these appear across UD’s nationally renowned Core curriculum.

“In addition to the subjects noted here, the University of Dallas should be commended for its requirements in philosophy, theology, fine arts, and the history of Western civilization,” the guide states.

Wall Street Journal and Others

Since July, UD has received several academic honors and rankings, including being named one of the country's best institutions for undergraduate education by The Princeton Review and one of "America's Top Colleges" by Forbes.