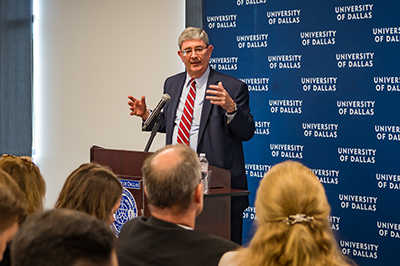 On Friday, Sept. 13, the university community welcomed George Weigel, distinguished senior fellow of the Ethics and Public Policy Center and the father of two UD alumnae. Celebrated for his two-volume biography of St. John Paul II and many other intellectual contributions, Weigel presented an exploration of the current Catholic situation in light of a new interpretation of the past 250 years of the church’s interaction with social, cultural, economic and political modernity.

This exploration is the topic of Weigel’s new book, The Irony of Modern Catholic History, which was published Sept. 17; he had advance copies available for purchase and signing after the lecture.

“I have enormous affection for this school,” said Weigel, who most recently delivered UD’s 2014 Commencement address, in his opening remarks. “The University of Dallas provides the finest undergraduate education of any university in America.”

Weigel’s return to UD’s Irving campus certainly marked a homecoming of sorts for the distinguished scholar. The lecture, which provided an overview of his book, did not, as Weigel emphasized, introduce any new facts; it simply reconfigured them. 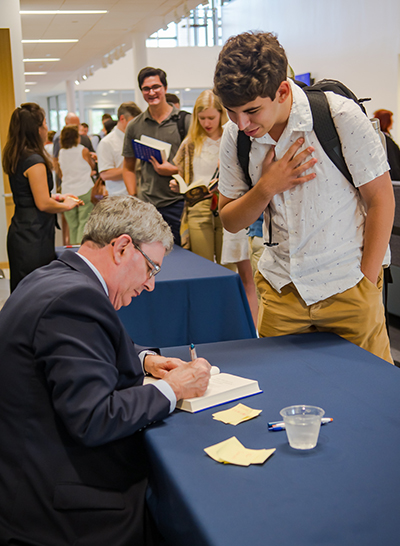 “It’s a frank exercise in revisionist historiography,” he explained. “I’ve taken shards of stone from many historians and rearranged them into a new mosaic.”

Weigel went on to examine “the many ironies in the fire of the Catholic Church’s engagement with modernity.”

One such encounter occurred in the late 18th century with figures like Volitaire, who called for the destruction of the Catholic Church; paradoxically, these encounters reenergized the church for its missionary and evangelical work, and, interestingly, helped begin the rediscovery of the church’s own essence, which may save the modern world from descent into fragmentation.

Weigel divided the book, and thus the lecture, into five acts, with Act I being “Catholicism Against Modernity” and Act V “Catholicism Converting Modernity,” as a retort to the tired, one may argue false, belief that modernity acts and Catholicism simply reacts. The drama of the church’s relationship to modernity is far more complex, interesting and hopeful than often thought.

Weigel’s lecture left the audience with much to hope for with respect to the future of the church as well as an exhortation for work to be done.

“The Catholic future depends on proclamation and evangelization,” he said as he introduced Act I. “This can’t be taken for granted; it has to be effective.”

“Everyone in the church is a missionary; everywhere is mission territory,” he added as he wound up Act V. “The rediscovery of the essential evangelical character of the church has come just in time for us in our part of the world.”

“The Catholicism of the 21st century will be chosen, not inherited,” he concluded. “The deepest irony is that in the often turbulent encounter with modernity, Catholicism has recovered. The flattening of the human experience has helped create a new openness.”