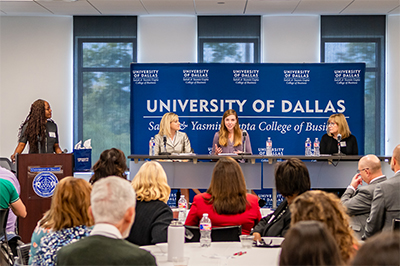 Last month, the fall 2019 Women in Business Leadership Panel and Networking Event featured three UD alumnae, and for the very first time a current UD student. Experienced in their fields, each brought a high level of perspective on “Elevating Entrepreneurship” as the University of Dallas community gathered for lunch and discussion.

When Gail Warrior, MBA ’99, was growing her business while raising her son, he sometimes came back to the office with her after school. They would get dinner from the Boston Market around the corner, and if she was still working at bedtime, she would push two chairs together for him to sleep on. It wasn’t about work/life balance, so much; it was about integration, being a mom and an entrepreneur all at once.

Warrior, now the CEO of CASPR Group, moderated the Women in Business panel on Oct. 24 that focused on female entrepreneurs: how they’ve succeeded, the sometimes unique challenges they’ve faced, and their advice for other entrepreneurs (especially women).

Jasmine Adams, BA ’21, began using old swimsuits to remove her makeup when she was in high school; she realized that their particular fabric actually worked very well for this purpose, so she started to cut them up and take them with her. She was taking an elective, run by the National Youth Entrepreneurship Challenge, that required a business plan for a new product, so she decided to turn these old swimsuits into Smudgies. After presentations at the local, regional and national levels, she won the National Youth Entrepreneurship Challenge and received $10,000 to put into her venture, and Smudgies LLC was born. Now Adams is both a junior at UD (a double major in English and business, no less) and an independent business owner.

For Adams, fear was a huge part of what she had to overcome when she was starting out. First, it was the fear of public speaking when presenting her product to investors during the challenge, but as she advanced in the competition, she gradually got more comfortable with this part of it.

“I realized that I was the expert on my product, and people were there to hear from me,” she said.

One strategy she recommends for handling that and other fears that arise is to write down everything that could go wrong and how she would deal with each scenario; on the flipside, she writes down her biggest goals — the best things that could happen. Is the chance of these best things worth the fears of the worst? 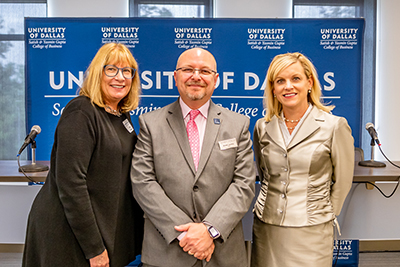 For Cathy Pullen, MBA ’85, corporate managing director at Savills North America, the biggest fear at first was financial. Not unlike Adams, the key for her was figuring out what was at the root of that fear (taking out too many loans, not being able to support her family, etc.) and how she could address it. According to Jennifer Chandler, MBA ’04, managing director, sales performance executive and Dallas market president at Bank of America, the financial fear is a real one for women starting businesses: in one study, of all funding for entrepreneurs, only 2.2% went to women.

“But that’s a huge opportunity,” she said. “Don’t let that slow you down; I hear these stories over and over: the grit, staying with an idea and solving a problem.”

Pullen’s business partner in their real estate firm is also female, and in their area (Philadelphia) at the time they were starting out, they were the sole female-only team.

“We were going into a male-populated field,” said Pullen. “We just decided, ‘We’re not failing; we’re going to do this.’ The thing is, though, you're going to have a lot of failures. Learn from every failure you have; say 'whoops' and learn from it and move on; just put your head down and do it."

Advice for Their Younger Selves

When asked what they would tell their younger, less-experienced selves, Pullen said, “Hire people who are different from you, with different skills — not your image.”

“Everything that went wrong or that I didn’t know, I would freak out,” said Adams. “I would have a crisis: Should I even be doing this? I wish I had known better how to cope with those crises, versus freezing for days at a time — how to be more gracious and roll with the punches better.”

For Chandler, it’s about working smarter, not harder, being efficient and reflecting a lot on how you’re spending your time. If you’re going to stay late working, work on things that are necessary for growing your business; don’t just work for the sake of working on things that could be done later, because work/life balance is also extremely important.

“Bring your whole self to work, and don’t feel guilty,” she said. As a mother, you don’t stop being “Mom” at the door; bring your kids to work sometimes if you need to, like Warrior did with her son. Also, make the time you’re with them quality time; put your phone down, and get Boston Market for dinner.

“Find ways in the moment you’re in to still be Mom,” said Warrior. “Make sure they don’t feel neglected, and remember no two days are the same.” 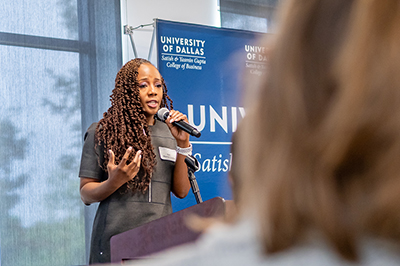 What advice did they choose to ignore? Warrior shared a story about bringing in a consultant to help save her business, and he advised simply filing for bankruptcy and closing their doors; she didn’t take this advice, and six months later, the business received the money that helped it to thrive. Meanwhile, Chandler was told that she needed to take golf lessons in order to be able to “hang” with the men; she knew that wouldn’t work and didn’t do it.

“But in many cases, it’s all of those yesses,” she added. “The extra event, the extra class at UD; those things can help you toward success. Really, it’s about knowing when to say yes, when to say no. You have to find what you love and are passionate about, and be your authentic self.”

Adams, in turn, was advised against going to college, since she already had a successful business.

“There were all of these voices all the time giving me all the advice,” she said. “It could be overwhelming. A pointed suggestion I got a lot was that going to college was a waste of time, and sometimes it is frustrating to be spending so much time in class versus running my business, but I see college as a long-term investment, adding value to myself as a person, and business is so much more about people than about money.”

Women in a World of Men 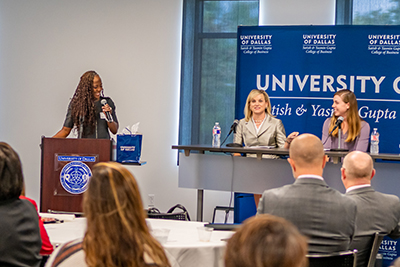 How do they navigate through the adversity that comes with being female entrepreneurs in a world still dominated by men?

“You have to be the beneficiary; lead those behind you,” said Chandler. “Bring up others with you. Also, think about where you’re spending your hard-earned dollars; do these companies have diverse boards, and so on? Remember that when you support other women, you support multiple people behind them and their families.”

Adams, meanwhile, spoke of the importance of finding a mentor, someone close who knows the whole situation and can be honest about both the good and the bad. Pullen agreed that a mentor is essential and added that while it would be nice, as a woman, to have a female mentor, your mentor does not have to be female.

Pullen also spoke of imposter syndrome — the feeling, especially as women, that you’re not good enough and shouldn’t be there. Even if you’re the only woman at an event or in a meeting, you go in as a professional who knows what she’s doing.

“Make a list of all your victories,” she advised. “My partner and I have been the first women at lots of things. Don’t let your mind hold you back, thinking that you can’t do this — because you really, really can.”

Warrior added that especially as you get older, not everyone will see your value, so you have to know your value and know what you bring to the table. And often, at those male-dominated events, they are actually intimidated by you. 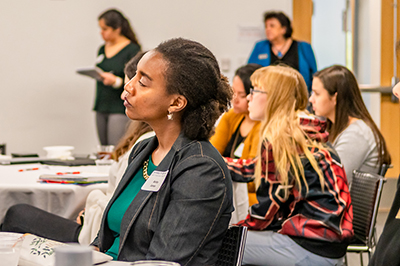 Finally, Pullen emphasized not to set unrealistic goals of perfection: “Celebrate your victories and know that perfection is impossible to attain,” she said.

“Don’t wait for things to be perfect,” agreed Adams. “I realized that I can’t both be a full-time student and run my business full time and give my full self to both, so I just have to make sure everything is heading in the same direction, that I’m not wasting my time and that I’m learning as much as I can. Also, I can’t let my relationships fall by the wayside.”

“You make time for what’s important,” agreed Chandler. “Health and sleep are so important. Remember, we do all of this so we can enjoy all of that, so sleep and take care of yourself.”

“It gets better and easier,” assured Pullen. “Perfectionism gets better with age, meaning that you get more comfortable with not being perfect.”

“I share my mistakes with others so they know that it’s OK,” added Chandler.

Adams also added that it’s good to share your process, not just your final finished, perfected product,  with your customers and followers, like she did when she was working on rebranding and creating a new logo.

“It was so helpful to see successful women talking about facing the fear of failure head on, especially by thinking of the absolute worst that could happen, making a plan for that, and then focusing instead on our goals,” said Andrea (Jauregui) De La Torre, BA ’14, who has her own baby sleep consulting business, Tiniest Dreamers, and attended the lunch and panel.

As emphasized by Gupta College of Business Dean Brett J.L. Landry, the Women in Business Leadership panels are meant to be continuing conversations. If you would like to join the conversation, email Rebecca Almanza, director of corporate and community partnerships, at ralmanza@udallas.edu.