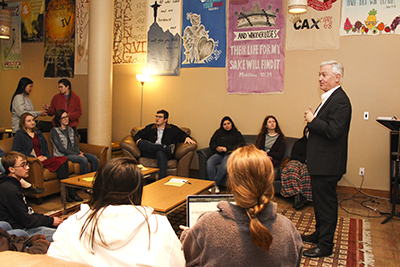 The annual National March for Life took place in Washington, D.C., on Jan. 24 — and for the first time, Crusaders for Life — UD’s largest student organization — represented the university there in an official capacity. Forty students, including 25 freshmen, made the trip; this number became 45 total in the UD group because they were accompanied by Campus Minister Shelby (Flood) Ponikiewski, BA ’15, and her husband, Trevor, and joined by alumnus and former CFL president Andrew Collart, BA ’19, and his brother and sister.

The trip involved a lot of planning, beginning as far back as last summer. CFL got approval from Student Affairs on Oct. 2 and held their first fundraiser Oct. 5. Much like for Alternative Spring Break, participation in the trip involved an application and interview process. The officers did not turn anyone away, but some students did decide not to go once they learned more about what the trip would entail, including missing two days of classes and staying at a rectory in a D.C. neighborhood somewhat far from the location of the rally and march. 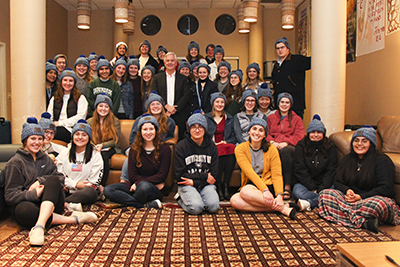 Because so much planning had to happen so quickly, CFL Treasurer Mary Kate Tomassi, BA ’20, recruited her mother to help make phone calls to find a place to stay; the travel agent UD uses for the Rome Program booked the group on a flight that left Dallas/Fort Worth that Thursday morning, Jan. 23, and returned on Sunday, Jan. 26.

Some students, like CFL President Kateri Remmes, BA ’21, an English major, had been to the National March for Life before (this was actually her 10th time); some, like mathematics major Tomassi and theology major Tatiana Rios, BA ’23, had been to marches in other cities but not the D.C. march; and some, like Spanish and education major Kate Frediani, BA ’23, had never been to an event like this at all. 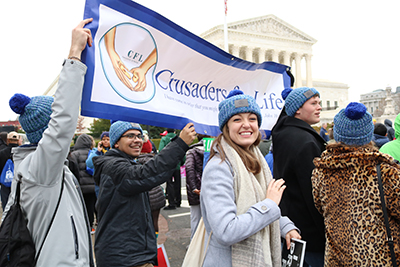 Frediani said that as a high school sophomore and junior, she had been pro-life in name but not in action, but then she had set out to learn more about the movement and what it stood for; her senior year of high school, she started a pro-life club, but being part of Crusaders for Life has been eye-opening because it is such a well-established group. Rios, meanwhile, is a Catholic convert; she did not grow up in a religious household and for a long time did not even know what abortion was. In high school, she started a pro-life club and last summer attended a pro-life camp at UD.

For Rios, the most striking part of participating in the National March for Life was seeing how many people were there, coming together to try to make change happen. 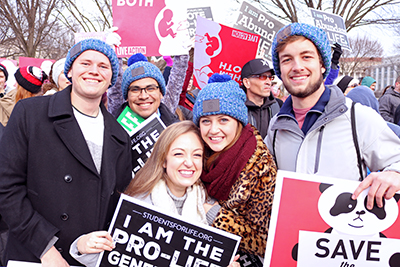 “We were praying the rosary with 1,000 people,” she said. “And it struck me, too, how outnumbered the protestors were, and the anger in them versus the joy that radiated through us. We were peaceful, and they tended to be hateful. I did see another student interact with a pro-choice woman, and they did so with such peace.”

Frediani, Remmes and 14 others from the UD group attended the National Pro-life Summit on Saturday. For Frediani, the summit and also the experience of the march as a whole, seeing how many students were there, who wanted to be there, were the most memorable parts of the trip. For Remmes, it was seeing the new members of CFL who hadn’t experienced anything like the march before. 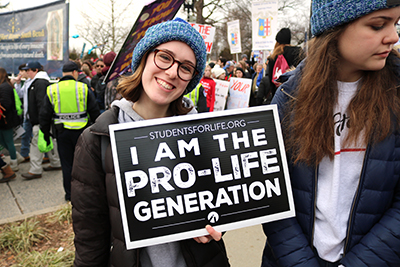 “Seeing it through their eyes, looking down from Capitol Hill at the sheer number of people — that was significant for me,” she said.

“I know there are a lot of young people involved in the pro-life movement,” said Tomassi, “but seeing how many people there were, and especially young people, was really amazing. I remember seeing just hoards of people who hadn’t been at the rally pouring into the march.”

She noted that while there were probably well over half a million people there, she only saw three news cameras. President Donald Trump spoke at the rally; he is the first president ever to do so. 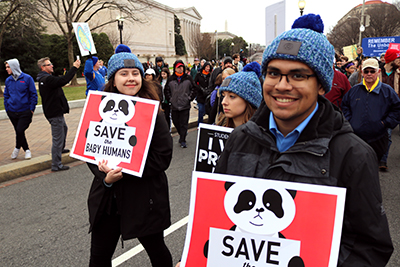 Aside from all of the people they encountered in the march, the students were struck by the generosity of the parish that hosted them and the connections fostered in their own group when they all gathered together the night before the march, going around the room and each sharing why they had come.

“People really started to open up, even those who had been shy at first, and we all had such different reasons for being there,” said Tomassi. “There was both a variety and a similarity to the stories.”

Tomassi also particularly appreciated the opportunities to share with others outside of their group or the movement why they were there, to expand the knowledge of the pro-life movement and what it means. One such encounter was a conversation between CFL Social Media Officer Erin Quinn, BA ’21, and one of the Uber drivers who transported the students.

“In some sense, we’re history makers,” added Remmes. “We hope to be the generation that ends abortion.”

The first two photos are from the send-off President Thomas S. Hibbs, Ph.D., BA '82 MA '83, gave the students before their departure.

Photos from the march are courtesy of Kateri Remmes.