Interning in a Pandemic 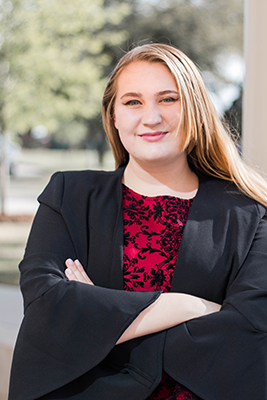 Politics major BeLynn Hollers, BA ’21, participated in site briefings at the White House, the Department of State, the British Embassy and the Hong Kong Economic Office this summer — albeit virtually. In her internship with the nonprofit Mil Mujeres Legal Services through The Fund for American Studies (TFAS), she learned to manage time zones, juggle meetings in L.A. and Chicago, and help people attain legal residency status while also taking classes at George Mason University — all from her Old Mill apartment. In retrospect, though she certainly sometimes missed the physical presence of others and getting to actually be in D.C., she thinks that her experiences were in some ways enriched by their virtual nature.

Mil Mujeres aims to help immigrants, particularly those in low-income communities who have experienced violence in the U.S., as they work toward attaining legal status. As a legal intern, Hollers’ duties included tasks such as processing mail and confirming that all necessary documents for expedited cases were correct and in order. While seemingly routine, such duties were critical to ensuring that legal residency cards made it to the appropriate individuals and visa applications had the strongest chance of being approved. Too often, expedited cases would be missing critical exhibits or lacking significant items such as cover letters. Hollers’ responsibilities encompassed searching for information in a client’s file to create a compelling cover letter or determining what was needed to expedite a particular application.

“It wasn’t until I started working on these expedited cases, writing these persuasive letters, that I realized this is very meaningful work,” she said. “It was kind of boring because I was sitting at my desk in Old Mill by myself for the 10th day in a row behind a laptop, but then I would read these stories, and a lot of these people were victims of sexual assault, domestic violence, felonous crimes; a lot of them have worked very hard to be where they’re at, but still have so many barriers to entry. It was really inspirational to me to read some of the stories of what people had endured.”

TFAS is an academic internship normally based in Washington, D.C. As a Sumners Scholar at UD, Hollers had received an email earlier in the school year saying that the Sumners Foundation would fund students for the program, but once the COVID-19 pandemic hit, a summer in D.C. seemed questionable. TFAS later confirmed that the program would proceed, albeit online, with full financial support from The Sumners Foundation for the duration of the internship.

Hollers was required to take classes during the internship, so she took an “Economics in Transition” course as well as a D.C. seminar course on political journalism and public policy. The courses were through George Mason University, but part of the TFAS program.

“The political journalism and policy class was really cool because the policy side incorporated projects for whatever organization you were working for,” said Hollers. “I actually did a lot of immigration research and got to write memos and things like that, and that was really interesting. I was able to take what I was learning and go research and write papers on it as well.”

Aside from the internship component and the course component, TFAS also includes guest lectures and site briefings. Hollers attended many guest lectures and professional development workshops, including a law school admissions panel and a graduate school admissions panel. The guest lectures included “Why the Founders Created the Electoral College,” “Political Economy: Is Capitalism Sustainable?” and “Free Speech Face-Off: The Rights of Social Media Companies vs. the Right of Free Expression”(this last  given by National Review Online Editor Charles C.W. Cooke), among others. She received the benefit of TFAS alumni networking and was paired with a mentor for the summer, UD alumnus Peter Redpath, BA ’95, who works for the Federalist Society. Hollers and Redpath met for an hour each week, during which Redpath shared law school and resume tips and discussed the job market.

“It was very helpful,” said Hollers. 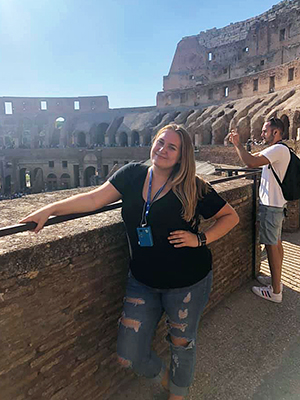 A transfer student from Collin College, where she earned an associate’s degree, Hollers came to UD in the fall of 2018. At Collin College, she knew she wanted to go to law school but didn’t yet know what to major in for her bachelor’s degree. To help figure this out, she took courses in different disciplines, including philosophy, psychology and political science. The political science class was based on political philosophy, incorporating Aristotle, Plato and Locke, among others. Hollers went to her professor for this course — Julie Hershenberg, J.D., who was also her pre-law adviser and still serves as a mentor — and expressed uncertainty about where to transfer. Hershenberg, whom Hollers credits with inspiring her to pursue a bachelor’s and later a J.D., recommended the University of Dallas for its political philosophy program.

“Once I looked into the school, the Politics Department and the curriculum — the Core — I knew it was exactly where I wanted to go,” said Hollers.

“UD and having this liberal arts background have given me this way of thinking and these beautiful components of truth,” she added. “What I really liked about this summer, though, was that I learned how to apply truth practically — how to read policy and how to interact with economics, for example.”

In Hollers’ economics class, they evaluated countries transitioning from socialist economies into capitalist economies, including China, India, Russia and Venezuela, as well as many countries in Africa.

“Knowing I know how to write, knowing I have this grounding from UD, has been really helpful, but this summer gave me the chance to say, ‘This is how I can apply these things practically; this is how I can take what I’ve learned and put it into action,’” she said. “It solidified that I still want to go to law school, but I also want to take some time off to explore other things. This summer has been very pivotal because I’ve gotten to meet a lot of people, and I’ve gotten to connect with a lot of TFAS alumni and ask them how they got a job in D.C., how they went from entry level to where they’re at now, what education it took to get there, and that kind of thing.”

In general, Hollers feels that her UD experience has been very humbling. In community college, she was more or less a straight-A student and was used to being at the  top of her class. But at UD, particularly in Core courses, she struggled a bit, particularly with writing.

“One of my professors said, ‘Yeah, you’re very smart in class, but your writing is not good,’” she laughed. “In my classes this summer, though, I did great — I got a 100 on my final, and I’ve never gotten a 100 at UD! So, I see that at UD, yes, there is rigor, and maybe my grades don’t always show the effort I put in, but going out into the real world, it’s kind of a relief to know that I’m so much more prepared than I thought I was.”

This summer, Hollers received the academic award for the public policy and economics track.

“When I got the award, I was like, ‘Are you sure?,’” she said. “It was nice to take these classes, and they were difficult, but now I know I have this background that will help me. In my political journalism class, the professor wrote on my final paper that I had the best paper in the class, and again I asked, ‘Are you sure?’ — because I’m used to having the worst paper at UD! So the summer has been really good for me in that it’s shown me how much UD has helped me grow and become a better student.”

Hollers is not sure what type of law she wants to practice. In addition to the immigration law internship, she worked as a receptionist at a family law firm while she was at Collin College.

“In an ideal world, I would love to work in First Amendment rights, and that’s probably what I’ll write my thesis on this semester, but I also want to take some time off and get more specialized in a particular field. I’d like to work in media policy as it relates to First Amendment issues,” she said.

This summer, she was able to talk to many people who went to law school but who also took time off before and are doing very well in their careers.

“In fact, they’re doing even better in their careers because they made these connections before they went and spent a lot of money on a law degree without knowing what field they wanted to practice in,” she said. “I’m pretty open to exploring new things right now; I’m pretty undecided.”

She has enjoyed her UD experience and is sad that it’s ending this year. As for the summer, she had very much wanted to be able to do the internship in D.C., but she thinks that if she had been there, she probably wouldn’t have gotten to also work with the L.A. and Chicago offices, among other experiences unique to this much more virtual (if hopefully temporary) world.

“I got exposed to a lot more than I think I would have if I was actually in D.C.,” she said. “I’m sure there would have been other experiences there, but I’m thankful for it for sure.”

At the end of her first week, her supervisor had shared a picture of a man whose mail she had processed, holding his legal residency card.

“He now can work legally and provide for his family,” said Hollers. “We were able to help people get legal residency status. Some desperately needed the health care and the help. To be able to read their case file and their story and then write a persuasive cover letter — sometimes we didn’t have a lot to work with, and were trying to argue for a humanitarian visa, etc., and it’s uncomfortable reading some of the accounts — and then to see a few weeks later that someone’s card got processed, was very rewarding.

“We were encouraged by the fact that even though we were behind our laptops by ourselves in random states, we had this connection with people across the country,” she added.