Eye on the Helpers: Students Serve at Food Pantry Over Summer 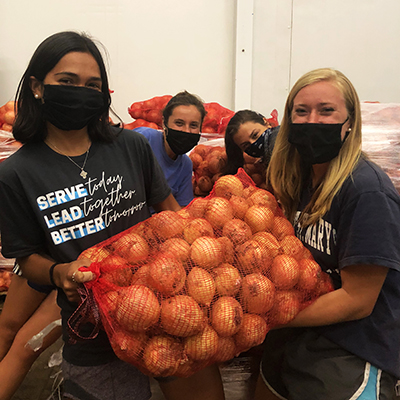 Rauh, an English major and business minor with a Spanish concentration, had worked at CCS her freshman year as well, an internship she had obtained through Assistant Professor of Human and Social Sciences Carla Pezzia, Ph.D., who is involved with UD’s ongoing work with CCS. Rauh had worked at a food pantry back home in Milwaukee, too, and enjoyed the work; she also got along well with her supervisor at CCS and had hoped for the opportunity to work together again.

This summer, of course, was a little different from Rauh’s previous experience, in which people could come into the large warehouse and shop for what they needed, much like going to a supermarket. However, the pandemic forced the pantry to shift to curbside pick-up only, requiring Rauh and others to spend their days in the parking lot, distributing food into the trunks of vehicles as they conversed with people through car windows while wearing masks.

“It was really interesting to see how many more people came to the pantry each day in comparison to how many came when I worked there freshman year,” said Rauh. “The pandemic and its effects have hit the neighborhood and people the pantry serves extremely hard.” 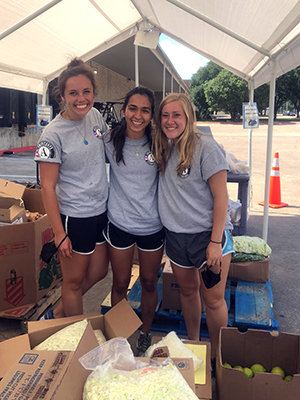 According to Rauh, Crossroads used to serve around 80 families per week on average, but during the first weeks of the pandemic, this number quintupled to 400. Prior to the COVID-19 outbreak, CCS served a maximum of about 200 people weekly; at the peak of the virus crisis, they served 1,100. Over the summer, Rauh served about 800 families per week.

“It’s hard to see and hear the stories of these people,” she said. “Sometimes people write off those who go to a food pantry as lazy and unwilling to get a job, but in this case many had just lost jobs. For many, pre-pandemic they weren’t in poverty; they were living on the edge of the lower middle class, maybe, but they were doing OK. You just can’t judge; you never know. I always try to address people with compassion, because one never knows another’s backstory, what their week’s been like.”

Someday, Rauh would like to start her own food pantry. This year, as a UD senior, she will also serve as an ambassador on campus for the University of Notre Dame’s Alliance for Catholic Education (ACE) program. Next year, she will begin work on her Master of Education while teaching with ACE.

Rauh originally chose UD because many people in her family’s Catholic circle in Milwaukee had come here, but while the Core was a draw, UD wasn’t extremely high on her list. Now, however, she considers it providential that she ended up here. 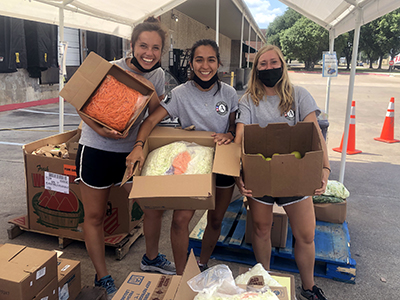 “This is absolutely the right place for me to be; I couldn’t be anywhere else,” she said.

She believes that UD has helped and will persist in helping in the future with experiences such as her work at CCS this summer, because it teaches open-mindedness and how to approach people with the goal of coming to true knowledge and understanding of their lives and situations in order to ultimately love them better.

“There’s a lot more to a person than what shows on the surface,” she said.

“With my English major especially, I’ve learned how to get to know someone and serve them,” she added. “UD teaches you about life, humanity, how humans interact with each other, and what’s going on in their minds, souls and hearts.”