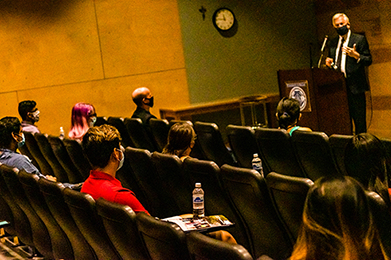 “I fell into a story at the University of Dallas 40 years ago to this day,” he went on. “My mom used to say that she kept praying I would graduate from high school,” said Hibbs, a first-generation college graduate himself, who admitted he wasn’t the best student. After graduating high school, Hibbs headed to Holy Trinity Seminary and the University of Dallas, where he received his B.A. in English. Some years later while he was pursuing his Ph.D., his mother then inquired: “'Are you ever going to get out of college?” “Eventually,” Hibbs told her.

Behind the curtain of last fall’s inauguration — and the announcement of the President Thomas S. Hibbs and Dr. Stacey Hibbs First-Generation Scholarship — a much larger, university-wide effort was also underway.

Under the charge of then-Interim Dean Sally Hicks, Ph.D., with Director of Academic Success and the Seven Arts of Language Matthew Spring, PhD ’15, serving as co-author, the Constantin Foundation awarded a $750,000 grant over the next three years to support scholarships to first-generation students from Texas. The grant additionally provided funding to launch the Constantin Scholars Bridge Program, which accepted its first cohort of DFW-area UD freshmen this past summer with the first virtual class held on July 13.

“We are grateful to the Constantin Foundation for their generous support of this initiative,” said Spring. “The scholarship funding they have provided will ensure that these students complete their degrees without falling into debt, and, according to the Constantin Scholars’ own testimony, the Bridge program left them feeling confident, stress-free and eager to continue their education at the University of Dallas. They are already establishing themselves as student-leaders on campus, and we are eager to learn of all they do for their own communities in the future.”

At the helm of UD’s first-generation programming initiative is Dr. Spring, Academic Success Adviser Daniel Adams, M.S.Ed., Vice President of Enrollment Lizzie Griffin Smith, BA ’09 MBA ’13, and Director of Financial Aid Taryn Anderson, BA '07. The initiative was supported in sundry ways by the university’s acclaimed undergraduate faculty in the Constantin College of Liberal Arts, by undergraduate peer mentors Annette Kaehler and Kien Tran, and by staff from nearly every department on campus. The Bridge class itself — The Seven Arts of Language — was especially successful because of the support offered by Professor James DeMasi, Dr. Augusta Hardy, MA '15, and the undergraduate peer mentors.