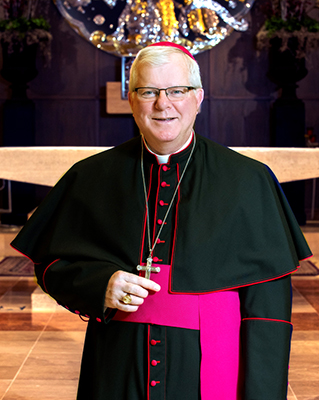 From the time he was in fourth grade, Bishop Francis Malone, BA ’74 MA ’77 MDIV ’77, knew he was going to be a priest. As he was serving Mass in his home parish, Malone heard God’s call, loud and clear. Many years later, he heeded this call by enrolling in the seminary, and on May 21, 1977, he made the final commitment to God’s plan on his ordination day.

On Jan. 28, 2020, Malone was ordained a bishop, saying yes to God once again. As he considers his pathway to becoming a bishop, Malone explores some of the strongest influences that guided him along the way.

In addition to the great example of many hometown priests, Malone was very inspired by his uncle, who was an “incredible priest.” His senior year of high school, Malone had the opportunity to live with his uncle, which was very impactful. Malone’s uncle remained involved after Malone’s ordination, gifting Malone with his first chalice (which he still uses today), and preaching at his first Mass. This relationship, says Malone, was “the icing on the cake” of his vocation story.

Another formative time in Malone’s life was understandably his time in Holy Trinity Seminary, the seminary attached to UD. Malone is the 12th alumnus of UD to become bishop, and the sixth from the classes between 1974 and 1978; with the number of great men who came out of UD and Holy Trinity Seminary in those years, Malone cannot help but say, “We were blessed.”

For seminarians, the majority of their social life, and life in general, is limited to the seminary. Malone and his fellow seminarians prayed together, went to Mass together, and studied the Bible together, and the strength of the friendships that resulted has lasted through today. In reflecting on this formative time together, Malone points to the etymology of seminary. “Seminary” means “seed,” and just as seeds are nourished and nurtured, so was he in those times.

Given that Malone did not interact with many UD students, most of his exposure to UD came through the teachers — but that was enough to have a profound impact on him.

“Some of the most incredible educators taught at the university when I was there,” said Malone. Malone lists professor after professor, from a variety of different disciplines, whom he found extraordinary; among these were Dr. John Alvis, Dr. Louise Cowan (who was critical in creating the university’s Core Curriculum), and Dr. June Welch — Malone’s favorite history teacher, who had worked for Lyndon B. Johnson before coming to UD.

While each of these teachers taught Bishop Malone in an “exceptional” manner, he named a few others who were great spiritual advisers and examples as well: Father Gilbert Hardy, Father Christopher Rabay and Father Bede Blachner. Malone noted that it was very impactful for him to be able to seek out these professors for spiritual advice as well.

When asked to provide any concluding remarks about his time at UD, Malone recalled a time when he was an associate pastor at a parish in Little Rock. At the entrance to the parish, his co-pastor hung a banner that read “Through these doors pass some of the most wonderful people in the world.”

UD was challenging for Malone, as well as for many others — he noted that not everyone stayed through the whole program. However, when he recalls his professors and his friends, many of whom are now bishops themselves, who built a wonderful foundation for his life as a priest, he says the same banner could be hung above UD.

Malone now serves as the bishop of Shreveport, Louisiana, after many years of serving as pastor of Christ the King Parish in Little Rock, Arkansas, and chancellor for ecclesial affairs.