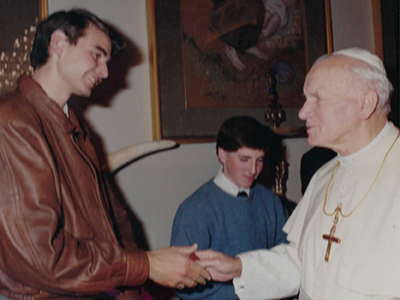 During his Rome semester in 1991, Joseph Meaney, BA ’93, with his friends (now Father) Kevin Cook, BA ’94, and (now Texas State Representative and UD Trustee) Tan Parker, BA ’93, attended a private Mass with Pope St. John Paul II. Several weeks earlier, they had hand-delivered a letter to the Swiss Guards outside St. Peter’s requesting the Mass and including their contact information; at last, they’d received the phone call instructing them to be at the Bronze Gates at 5 a.m.

“UD helped me grow as a person through my classes and the spiritual and intellectual atmosphere of the university, but also by providing some extraordinary experiences,” said Meaney. “For most people, that’s their one chance to actually live in Rome. So many unique events and friendships made my undergraduate years at UD very special to me.”

As it turned out, it was not Meaney’s one chance to live in Rome: In 1998, he founded the Rome office of Human Life International (HLI) and lived in the city for a total of nine years, helping to run the office and collaborating closely with dicasteries of the Holy See, particularly the Pontifical Council for the Family and the Pontifical Academy for Life. A onetime UD history major with leanings toward archaeology, it may be an understatement to say this was not the career path he had originally envisioned, but at the same time it made perfect sense for the dual U.S./French citizen whose mother had been a leader of the pro-life movement in his native Corpus Christi, Texas.

“I was born into the pro-life movement,” explained Meaney. “My mom is a medical doctor, though she never practiced in the U.S. After Roe v. Wade, she went to the bishop and said, ‘What are we going to do?’ He said, “What are YOU going to do?’ Her response was to start a crisis pregnancy center and many other pro-life initiatives. She served as the first head of the Respect Life Office of the Diocese of Corpus Christi.”

Today, the largest abortion “desert” in America is in South Texas, with a million people living in communities with no abortion clinics. The last abortion center in Corpus Christi closed a few years ago. Meaney credits his mother’s work and the patient, persevering actions of the Church and many pro-lifers for this achievement.

It may have been fate, then, that led Meaney in his mother’s footsteps. After participating in some archeological digs, including one on the Palatine Hill prior to his Rome semester, he determined that archaeology wasn’t really for him; he then turned his focus to history, specifically Latin America and European interventions, thinking that he would ultimately become a history professor. After one semester in a doctoral program at the University of Texas at Austin, however, he questioned this path as well. Taking a semester off, he explored a religious vocation, visiting various congregations. Going back to school, he switched from history to Latin American Studies and earned a master’s in that discipline, focusing on Catholic health care in Guatemala in his thesis. Ultimately, he volunteered for a medical missionary group working in Guatemala as a translator and mission coordinator.

On his trips to Guatemala, however, Meaney encountered an international population control program that offered midwives bonuses for each mother they persuaded to get sterilized once she had given birth; duly appalled by this practice, he eventually realized that his vocation lay in the direction of the international pro-life movement, which led him to lobbying at international UN conferences.

“It was a knock-down drag-out fight between pro-lifers and radical feminists at the 1994 Cairo conference,” he said. “They failed to pass a resolution proclaiming a universal ‘right’ to abortion because of JPII; it was the same thing in Beijing, with the pro-lifers limiting the damage; then, in Istanbul in 1996, the conference was supposed to be about urban planning and affordable housing, but abortion became the main topic again. There, pro-lifers basically won after a difficult struggle. This was a wonderful experience and my intro to international pro-life work.”

At that fateful Istanbul conference, he also met his wife, Marie. She and another friend he made there were the ones who suggested that he look into working with HLI. He reached out to HLI, but the connection didn’t happen immediately. Then, in 1998, HLI wanted to open an office in Rome, with the idea of working more closely with the Church. They were looking for someone who spoke Italian.

“I thought hey, I spent a semester in Rome, took elementary Italian,” said Meaney. “I was a French citizen so didn’t need a work visa, but honestly, my Italian was not so good at first — I took a crash course, and it improved quickly when I was living and working with Italians.” 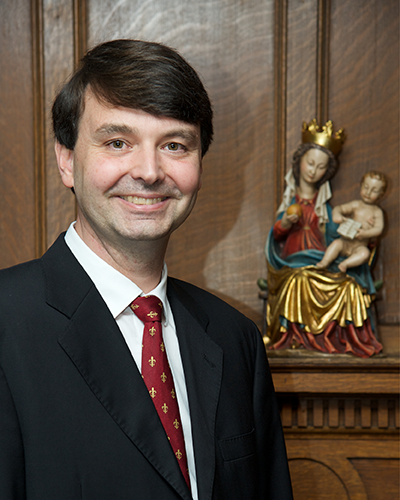 During his time with HLI he frequently served as a translator, getting to use all of his languages. During the Jubilee of Families in 2000, he did a reading at the Mass for the marriages celebrated by Pope John Paul II. Cardinal Lopez-Trujillo had offered him and Marie the opportunity to be among the couples in St. Peter’s Square that day, but Marie wanted a private ceremony with family in France. He translated during the 2000 World Youth Days for the international youth forum, into English from French, Spanish and Italian. Once, he wore a cowboy hat to a private audience with the pope because the international youth delegates were told to sport their national costume.

“It was such an extraordinary thing to have these opportunities starting with UD; I got to meet JPII on multiple occasions,” he said.

He and Marie were married in 2000 (though not at the Jubilee of Families), but their daughter, Thérèse, was not born until almost a decade later.

“It’s strange how prevalent infertility is among pro-lifers,” said Meaney. “We’re spending our whole lives trying to help babies come into the world and not be aborted, yet there are tons of infertile couples working in the pro-life movement. Infertility affects about 10% of couples and is a growing problem. My wife wrote a book on embracing the cross of infertility, and the spiritual challenges of infertility.”

The experience of infertility alongside his work in the pro-life movement helped prepare him for his current work as president of the National Catholic Bioethics Center (NCBC). In vitro fertilization, which is one of many topics the NCBC addresses, was encouraged by the Meaneys’ doctors; IVF, however, goes against Catholic doctrine.

“IVF was not really a big temptation for us, but this is one area of interest for the NCBC,” said Meaney. “Unethical scientific research, gender reassignment, etc.: These go against doctrine but are areas we explore. We also stand against Vitalism, or prolonging life at any cost. The Church believes human life is sacred and must be respected and treated with special dignity. This means that extraordinary means in health care are morally optional; the Church is all about freedom and only requires that ordinary means of caring for patients not be refused or denied.”

In 2010, after some time in the U.S., HLI sent Meaney back to Rome to earn his doctorate in bioethics at the Catholic University of the Sacred Heart.

“It’s a school of medicine with an institute of bioethics inside of it,” explained Meaney. “The Gemelli is the pope’s hospital, a wonderful huge institution with wings in all directions.”

In 2019, Meaney was appointed president of the National Catholic Bioethics Center after 23 years of work in the international pro-life movement, including travel to 81 countries, primarily as director of international outreach and expansion for HLI.

“The NCBC has so many programs and activities going on,” he said. “We work closely with the U.S. bishops and Catholic health care ministries on bioethics topics. The NCBC has a peer-reviewed academic journal, The National Catholic Bioethics Quarterly, and a monthly newsletter, Ethics and Medics. We offer an online certification program in Catholic health care ethics.

“The NCBC is much more academic than HLI,” he added. “Still, anyone can call or email and get a Ph.D. on the line to discuss an ethical quandary by going to ncbcenter.org. We have six full-time Ph.D. ethicists, three part time. We do about 2,000 consults a year, in which we help people make difficult ethical decisions — many consults are about end-of-life issues.”

On a sometimes daily basis, difficult ethical questions and problems are part of Meaney’s life and work now.

“Being president of a center involves a lot of things: publications, education, consultation with both individuals and institutions,” he said. “The president has to be a jack-of-all-trades — I’m called in for some ethical consultations; I speak across the country; I grade papers for students in our online certification program.”

Then there is the financial side; the NCBC has a fairly substantial budget that needs to balance. The center raises about one-third of its operating costs from donors and other fundraising, and receives income from institutional work, memberships, selling books, tuition for courses, etc., for the other two-thirds.

“There’s a fair amount of media work as part of my job,” said Meaney. “Bioethics is in the news almost every day; we comment on current events and issues from the Catholic moral tradition; we do a lot of radio and some TV. My favorite is when EWTN has me on. Journalists frequently call us to give them quotes for articles they are writing.”

Meaney’s first bioethics class was at UD, with Professor Janet Smith. He also took Philosophy and the Ethical Life and a metaphysics course with her.

“UD gave me a taste for it,” he said. “I enjoyed the intellectual challenge of wrestling with ethics quandaries.

“UD in general was a very good, very wholesome environment for a Catholic; I was intellectually engaged, and I played tennis on the team all four years,” he said. “The tennis coach would laugh that he had never before UD had athletes discussing Plato and Aristotle on roadtrips. I remember in the midst of Groundhog festivities hearing discussions about Dante or other classical thinkers.

“It was a very unusual combination of intellectual, Catholic and just generally fun,” he added.

One unrepeatable experience was taking a class with the Politics Department on American foreign policy during Operation Desert Shield.

“We debated just war theory, etc.,” he said. “Half the class were peaceniks, the other warhawks; by the time the class was finished, Operation Desert Storm had taken place, and we could see the results and see whose predictions had been right or wrong.

“UD consistently delivered remarkable experiences like that,” he added. “Many of the students I met there were intellectual, faithful Catholics, and knew they had a mission to take this wonderful education and make a difference. UD was very good at providing a solid foundation and helping students to mature, and even discern vocations. I’m excited that UD is set to make an even greater impact in a world and culture that desperately needs Catholic wisdom and faithfulness.”