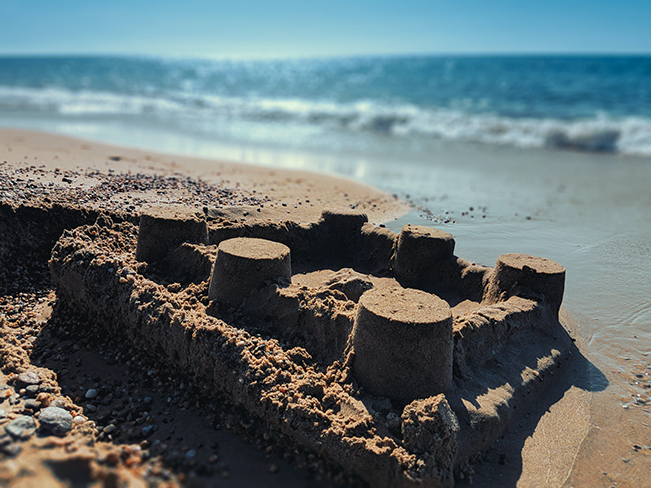 According to a team of University of Dallas juniors — Marie-Therese Aglialoro, William Kostuch and Cameron Nottingham — there’s an optimal water-to-sand ratio, roughly 6%, along with a borrowed methodology that’s endured the test of time dating back to the relics of the Old Kingdom. The students’ research, titled “The Best Sandcastles Are Egyptian: Pyramids Reign Supreme,” was awarded a Meritorious designation in the International Mathematical Contest in Modeling (MCM) — a first in university history.

The only U.S. team to receive such designation or higher, the UD castle-building mathletes placed in the top 8% of 13,749 teams participating in this year’s MCM.

The MCM challenges teams across the globe to clarify, analyze and propose a solution to their choice of one of three open-ended, real-world problems. Teams develop and apply mathematical models to solve their chosen problem by utilizing essentially any available resource — websites, books and articles, computers, and databases.

Each team is given four days to solve their problem, after which they publish a 20-page research paper that communicates their approach and findings. Teams are awarded one of five designations: Successful Participant, Honorable Mention, Meritorious, Finalist and Outstanding.

Agialoro, Kostuch and Nottingham chose to construct a mathematical model that would identify the best three-dimensional geometric shape to use as the castle’s foundation. Each shape underwent the same durability modeling test along the seashore — taking into account a battering endurance of waves, tides and rainfall.

After determining the optimal sand-to-water mixture for the castle’s foundation, the team tested their myriad of shapes, including cubes, cylinders, pyramids and cones, with their mathematical mode. The team then authored a two-page nontechnical summary suitable for publication in a fictitious vacation magazine.

In their paper, Aglialoro, Kostuch and Nottingham identified the best water-to-sand ratio by adapting their known results on granular cohesion. The computer model tested the sandcastle’s strength, providing analysis of collapse due to stress, erosion and oversaturation.

As faculty adviser of nine UD teams to compete in the MCM these past six years, Assistant Professor of Mathematics John Osoinach, Ph.D., plans to impart the same sort of creative solution thinking to future UD students. “UD students are very well suited for this contest, as it’s as much about clear writing as it is about mathematical modeling,” said Osoinach. “It’s an exceptionally well-written paper that uses mathematics in both practical and creative ways.” Praising the team’s ingenuity, he added, “Their sandcastle paper will be used as a guide for future UD teams.”