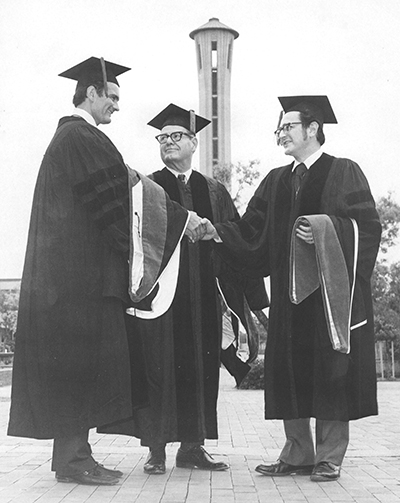 John Alvis arrived at UD as a freshman in 1962 in the time of UD legends, studying under Professor of English Louise Cowan during the tenure of President Donald Cowan (1962-77). He then did his master’s and doctoral work under Professor of Politics Willmore Kendall and began teaching at UD in 1968. Though he taught English literature, he had an equal command of politics, philosophy, theology and classical languages, guiding and inspiring five decades’ worth of students and colleagues, some of whom, such as Associate Professor of English Greg Roper, Ph.D., BA ’84, became both.

“By the end of my freshman year, on my Lit Trad II research paper (on Love in Paradise Lost, if you can believe it), he wrote one sentence: ‘You are ready to begin writing English prose,’” recalled Roper. “That response — encouraging but not flattering, acknowledging accomplishment while hinting strongly at how far I still had to go — probably was the single most influential sentence of my intellectual career. Someday I hope to write the English prose that John held out for me as a goal that day in April 1981.”

In his own English prose, Alvis published seven books on authors ranging from Homer and Vergil to Melville and Hawthorne. He additionally published articles on American political institutions, Christian theology, the films of John Ford, and Lorenzo Ghiberti's “Gates of Paradise” (the doors of the Baptistry of San Giovanni in Florence). A published poet, he wrote more than 15 plays. A nationally renowned scholar of the works of William Shakespeare, his writings reawakened the study of Shakespeare’s political thought. 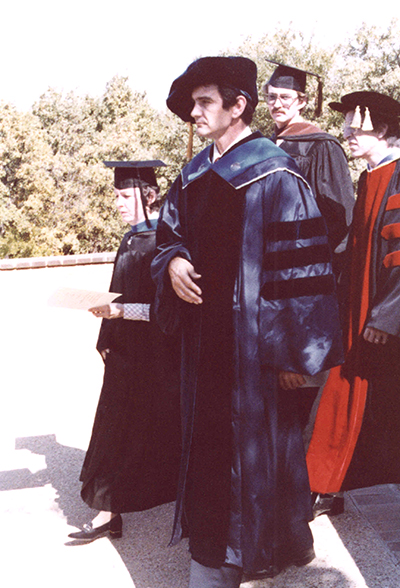 “John was ever the kind and thoughtful gentleman, the prudent and vigilant UD citizen-leader, and the ever probing and perceptive conversationalist; he was also one of the hardest and most conscientious workers I have ever met,” said Professor of English Gerard Wegemer, Ph.D. “He certainly embodied the UD spirit in his persistent quest for wisdom, truth, and virtue. We deeply mourn his loss, but celebrate his achievements as one of UD’s great founders.”

Alvis’ approach to great literature was to examine how authors use fiction and poetry to explore the eternal questions in regard to the best way of life and the best order of society. He believed that those who seriously study these monumental works witness the aspect of all times, thereby learning to imitate what is good while avoiding that which is otherwise. To Alvis, a liberal education was more than a four-year experience; it was the beginning of a lifelong journey.

“At a faculty meeting about the Core a year or so after I returned to UD, John stood up and said, ‘There are only two questions of a liberal education: 'What is the nature of reality?' and 'How should a life be lived?'" said Roper. “He then followed that up by saying, ‘Of course it takes a lifetime to become liberally educated, but any school that does not give you a head start on answering those two questions is not a university at all.’ Those statements have become the core of my own teaching and scholarship, and students know I often pose just those two questions as the final exam in Literary Tradition III.  When I do this, I get some of the best answers I have ever received on any exam.”

In teaching generations of both undergraduate and graduate students, Alvis was unfailingly fair, reflective, and open to new ideas and further learning.

“Dr. Alvis was a brilliant, decent, and just man who listened with thoughtful openness to all reasonable arguments, to which he would respond with generosity and eloquence,” said Associate Professor and Chair of English Debra Romanick Baldwin, Ph.D. “I recall being on a dissertation defence panel with him for a project that had taken a very different approach from his own. He asked the student a tough question during the defence, and when the student left the room, I braced myself to hear him elaborate upon a disagreement. Instead, he paused and said in his distinctively measured voice: ‘I learned a lot.’” 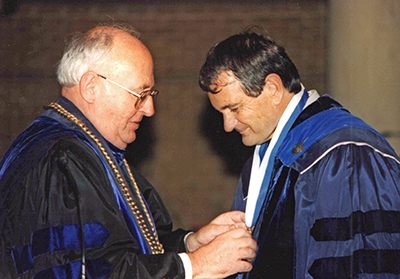 Alvis’ students certainly appreciated these qualities and regarded his influence as profound in their education.

“He was one of my favorite professors of all time,” said Annie (Crabbe) Muller, BA ’03. “He was a treasure to UD and to so many who loved him. He and his wife were married for over 50 years, and passed within days of one another. They will both be greatly missed.”

“When I returned to the University of Dallas last November, I was walking down the mall and caught sight of a professor beloved by so many of us, Dr. John Alvis, sitting under a tree in front of the chapel,” said Stephen Smith, MA ’99 PhD ’01, Dean of Humanities and Temple Family Chair of English at Hillsdale College. “What was he doing? Reading Vergil, of course, and getting ready for his first-year Lit Trad class. Rest in peace, Dr. Alvis, and thank you for a lifetime of love, learning, and dedication to your students, friends, and family. Memory eternal!”

“Dr. Alvis was indeed a huge influence on my life; he showed me that the study of literature had an intellectual solidity and power so far beyond the subjective responses I had experienced in high school that it completely transformed this science major's thinking about all of the humanities,” said Roper. “His own rigorous mind became a model that I wanted to imitate, and his careful, tough, patient responses to my papers forced me into this careful, rigorous thinking myself.”

“I had the good fortune to study with Dr. Alvis, both in a literature class and for my oral exam on my Junior Poet (T.S. Eliot),” said President Thomas S. Hibbs, Ph.D., BA ’82 MA ’83. “He had a distinctive and memorable voice, in both senses of that term. He had a way of reading texts in one discipline so that they spoke to the questions of multiple disciplines. When he spoke, students were called to genuine inquiry, to thoughtfulness about important texts and the fundamental questions of human life. We have lost a great scholar, teacher, colleague, and human being.” 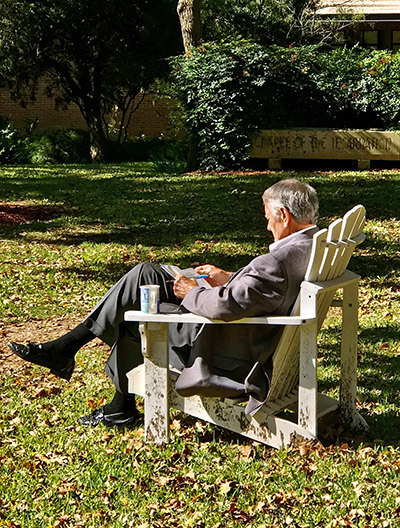 Alvis’ wisdom and scholarship similarly had a profound influence on his colleagues.

“John's broad and yet precise mind enabled him to ask the perfect question at the perfect time about the very core of the claim a text — or a paper, or a speaker — was making, and I watched him disconcert undergraduates, doctoral students, and even puffed-up Ivy League visiting speakers with his ability to ask the precise question that would get right at the heart of their theses,” said Roper. “I have never known anyone who had such an ability to see the minute details of a text and at the same time grasp the whole of an author's largest intentions and meanings.”

“John Alvis spent over 50 years at UD making a remarkable mind,” said Professor of English Scott Crider, Ph.D. “He read and thought about the entirety of the Western Tradition and trained — first under his teachers, then under his own tutelage and in dialogue with students and colleagues — to dedicate himself to the wisdom of that tradition of texts. He had the most comprehensive, detailed, and intelligent grasp of that tradition of any of us, a grasp always alive and fresh with new insight during discussion and writing.”

“Each of his very sentences — always probing but kind, always precise but not precious, always witty but never flippant — would extend in that pursuit like a gift one unwrapped while listening, only discerning the illumination with a period,” added Crider. “He possessed the high courtesy of dialectical love for the book under discussion, the interlocutor with whom he was discussing, and the unfolding understanding of the communal pursuit inside a cosmos of tradition.”

Alvis devoted his career, and largely his life, to his vocation of teaching at the University of Dallas and promoting the pursuit of truth and virtue. In 1989, a year after receiving the honor of being named the university’s King Fellow, he gave a speech preceding the announcement of the new King awardee in which he compared UD’s plight to Colonel Travis’ defence of the Alamo.

“It has to be acknowledged that when one declares for truth and virtue one confronts some odds that don't pertain to educators who promise no more than to transmit a certain amount of information,” he said. “For how does one learn about virtue anyway? One engages in close conversations with others who have read the same stories or arguments. … But you won't deepen, alter, or refine your sense of life without practicing the arts of argumentation, writing, and conversation. And it may very well be that what young people are now most habituated to — television, very loudly amplified music, and very emphatic modes of speech — are to careful reading and quiet conversation obstacles so massive that a student requires about four years to develop powers sufficient to begin to surmount them. Then, just at that fourth year, the student leaves us.”

Still, he maintained, it was necessary to keep trying: “But some losing battles are worth the fighting if they witness to a purpose which might inspire better-equipped armies to fight in the same cause and which, by bringing the margin of high-heartedness to their stronger forces, might enable those who come after to prevail. This may occur even if one buys no time nor significantly wears down the enemy in the losing fight. It happened once before. Remember the Alamo?”

“We have lost the treasure of John's mind,” said Crider. “Our disorientation at the loss is matched only by our gratitude at the gift of the mind he made, then gave us. If we now live in a less heroic age at UD than before, his example indicates that we will be responsible for that, for he showed us how to be intellectually courageous while morally upright.”

A funeral Mass for John and Sara Kathleen Alvis will be held in the Church of the Incarnation on the University of Dallas campus on Jan. 30, 2020, at 5 p.m. In lieu of flowers, please contribute to the John E. Alvis Memorial Fund.

The full obituaries for the Alvises can be found here.