A Presidential Conversation with Robert P. George and Yuval Levin 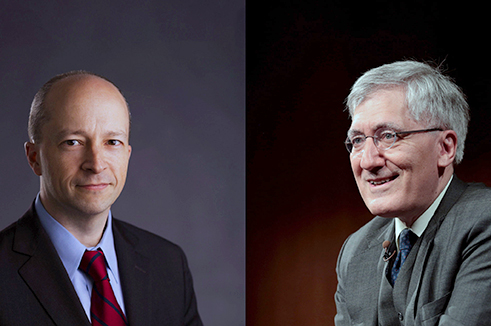 University of Dallas President Thomas S. Hibbs, Ph.D., BA ’82 MA ’83, has released the fourth interview discussion — titled “E Pluribus Unum: Is American Unity Still Possible? If So, How?” — as part of his recently launched virtual series, Presidential Conversations: Examining the Most Perplexing Questions of Our Time in a Spirit of Wonder, Joy and Friendship.

The most recent episode features Robert P. George, Ph.D., of Princeton University, and Yuval Levin, Ph.D., of the American Enterprise Institute (AEI), and is released on the heels of an announced joint lecture series, “E Pluribus Unum: Sources of Our Unity.” The series is a program of the Robert P. George Initiative on Faith, Ethics and Public Policy, and is jointly sponsored by AEI and the University of Dallas.

The debut launch of UD’s Presidential Conversations series, aptly titled “Pursuing Justice with Hope and Courage,” was released June 26, and welcomed Bishop Robert Barron, founder of global Catholic media ministry Word on Fire and auxiliary bishop of the Archdiocese of Los Angeles. A No. 1 Amazon bestselling author, lauded speaker and acclaimed theologian, Barron served as the keynote speaker at the University of Dallas’ third annual Landregan Lecture Series, presenting on “Church Architecture and Its Role in Spirituality.”

The second episode, titled “Made in God's Image: A Catholic Vision of Difference and Unity,” featured UD alumnus and Bishop of the Diocese of Brownsville Daniel Flores, BA '83 MDiv '87. The discussion, released July 13, centered on racism and the Gospel — and what constitutes an appropriate Catholic response to the present issues surrounding difference and unity.

The third episode of the series, titled “Building a Civilization of Love and Justice in Times of Division,” was released July 24, and provided viewers with deep insight and understanding from religious freedom advocates Montse Alvarado, vice president and executive director at Becket, and Louis Brown, executive director at Christ Medicus Foundation.

Each AEI/UD lecture will feature a conversation between Robert George, Yuval Levin or President Hibbs and prominent figures in our public life, either discussing some facet of the challenge of unity or embodying different views and speaking about what divides and unifies them.

The first event in the series featured an online conversation with Rabbi Jonathan Sacks about his new book, Morality: Restoring the Common Good in Divided Times. Levin served as moderator between Rabbi Sacks and Robert George.