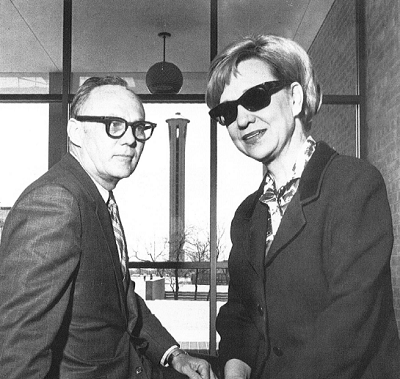 This article was originally published in May 2013 and was republished in memory of University Professor Louise Cowan shortly after her death on Nov. 16, 2015. We are republishing it again as a reminder of her wisdom.

"If I had been called upon a year ago, when I was only 95, to address you this afternoon, I would, no doubt, have spoken of the importance of liberal arts education for the preservation of civilization. But now I will only tell you, 'be sure you have memorized a few poems to keep you company through whatever lies ahead.'"

So began University Professor Louise Cowan's address to the newest members of UD's chapter of the Phi Beta Kappa liberal arts honor society, in which she reminded her audience that learning poetry "by heart" means taking it into your heart in a way that is not unlike prayer.

"Recitation takes on the lineaments of meditation and activates powers of the soul which otherwise would remain dormant," said Cowan.

In a lecture interwoven with the poetry of Gerard Manley Hopkins, John Crowe Ransom, A. E. Housman and Dylan Thomas, to name a few, Cowan focused on the "splendor of being" evoked by lyric.

"Lyric is a reawakening of the interior language embedded in humankind at creation, but lost at the fall," said Cowan. "It goes beyond the post-lapserian in order to see things as they ought to be.".

Louise and her husband Donald Cowan joined the university in 1959 as chair of the English and physics departments respectively. In the English Department, and later as dean of the Braniff Graduate School of Liberal Arts, Cowan played a major role in devising a curricula of classic texts that comprise both the Literary Traditions sequence in the Core Curriculum for undergraduates and the Institute of Philosophical Studies for doctoral students.

Phi Beta Kappa, founded in 1776, is the oldest and most respected undergraduate honors organization in the United States. In 1989, UD became the youngest university in the 20th century to receive a PBK chapter.