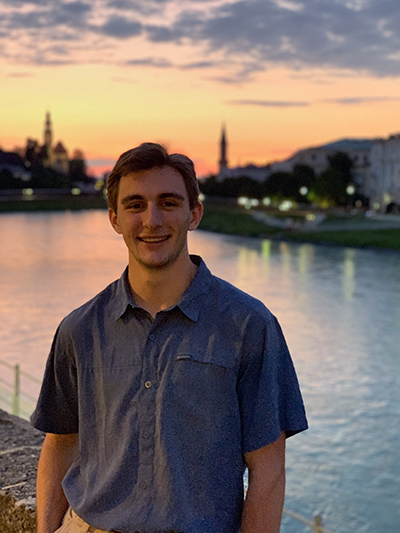 As a senior in high school, William Hebert, BA ’23, didn’t want to venture too far from his Cajun homeland of Lafayette, Louisiana. However, after touring six universities between Texas and Louisiana, Hebert was sold on UD, which was one of the farthest schools.

“I found UD through a family friend who wanted to come here but couldn’t,” said Hebert. “My mom told me to check it out, and I loved it.”

When asked why he chose UD over the other schools, Hebert says that the presentation was key.

“It’s the pitch,” he explained. “When you visit a big state school, they try to sell you the ‘college experience’ by showing you the campus and saying, ‘Look at how big our football stadium is.’ When you show up at UD, they say, ‘Look at how great our education is; look at how great our Catholic roots are.’ Immediately you know where the focus of the university is and that you’re coming here to get an education that has focus and rigor.”

He and his parents each separately concluded that UD was indeed very different from the other five universities they visited, and they all felt that UD was the best choice.

UD also appealed to Hebert because of the Rome Program; he got a taste of Italy when he visited Rome for a week with his father last summer as part of his senior trip.

“Rome was a pilgrimage of sorts,” he explained. “The churches are magnificent — everything a church should be.”

Among other memorable experiences, Hebert and his father were able to travel around Rome with a Louisiana bishop who is a friend of the family and celebrate Mass at the tomb of St. Peter. 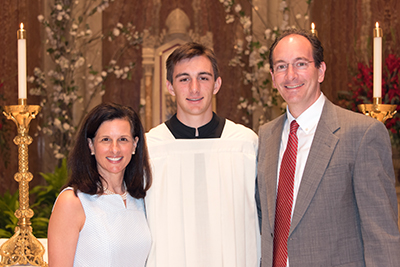 The beauty and grandeur of the Roman basilicas dazzled Hebert, and he would like to see them again. Not to mention that he has a few more Italian restaurants he’d like to try.

He and his father also visited Salzburg in Austria and Garmisch and Munich in Germany. Garmisch is a small ski town, and Hebert said they hung out in a small village for a couple of days, which was nice after the faster pace of being in Rome. In Salzburg, they visited the Mozart conservatory. This travel and getting to encounter these different countries and people made a deep impression on Hebert; during his Rome semester, ideally next fall, he hopes to build upon these experiences.

At UD, Hebert originally planned to study psychology because of his interest in understanding human behavior. However, he will now probably declare a philosophy major as he discerns a vocation to religious life or the priesthood. Philosophy, he feels, would be versatile enough to support whatever path he ends up choosing.

Hebert is also pursuing a music concentration and taking piano lessons with the Music Department. He started playing the piano when he was three years old and later taught himself guitar in high school by watching YouTube videos. He even played guitar in a few bands back in Louisiana, jamming to classic rock, blues and other oldies.

In addition to his intellectual formation in the classroom, Hebert wants to embrace all that college life has to offer. “I’m really striving to make this a time of spiritual and personal growth so that I enrich several aspects of myself as a person,” he said.