'The Overdue Compassion That Can't Wait' 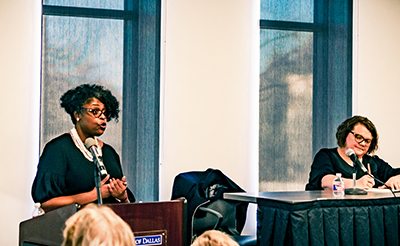 Compassion, she explained in her talk — titled "The Overdue Compassion That Can't Wait" — needs in the case of racism to go beyond simply feeling sympathy.

“I want us to look at it as an urge to feel the same distress as those we are showing the compassion for — not just putting ourselves in their shoes, but wanting to feel the distress that they’re left with and then having an uncanny desire to help alleviate it,” she said. “Imagine what would happen if those of us in this room who have not experienced racism begin to still have the awareness and urgency to alleviate it. Imagine what would happen if you have experienced racism, but you begin to become conscious of how racism may impact those in a racial group different from your own. This type of compassion is long overdue.”

This type of compassion, the type that makes a real difference, is well beyond just being tolerant of others. It is relentless work toward justice and equality, and it requires courage. One must be courageous and speak up when one witnesses inequality or racism, even though it is almost always easier and more comfortable to remain silent.

As put forth in “Open Wide Our Hearts,” the United States Council of Bishops' document on racism, “Racist acts are sinful because they violate justice. They reveal a failure to acknowledge the human dignity of the persons offended, to recognize them as the neighbors Christ calls us to love (Mt 22:39).”

In accordance with these words, Ginn suggests that silence, too, is a sin of omission. Further, these sins pertaining to racism, whether sins of commission or omission, should be taught as sins to our children, just as fundamentally as murder is taught as a sin. These sins of racism should be included in one’s daily inspection of conscience and in one’s inspection for the sacrament of reconciliation; they should be recognized as sins for which penance must be done and amends made.

In her position as principal of Cristo Rey, Ginn often comes across underprivileged students, some of whom don’t realize that their families’ poverty is the result of racism. They believe that it is just something that happened. She sometimes struggles with whether to enlighten them, but ultimately has decided that she owes it to them to do so.

“I owe it to them to make sure they know that their family didn't necessarily do anything wrong,” she said. “They haven't necessarily done anything wrong. There is a history of racism. There is a history of a sin that has caused their family to be in a state that I'm now hoping I can help them overcome. I definitely think it's my job to empower them, and hopefully educate them at a level at which maybe that education helps them to eradicate or balance out racism.”

Throughout all of the experiences of racism in her own life — including her father and all of his siblings dropping out of school as a result of the Jim Crow laws, her unarmed 17-year-old brother being shot and killed by a state trooper, and people questioning her qualifications to be a principal — Ginn has held tightly to Martin Luther King Jr.’s dream, though she worries that at times she has not been courageous enough, because she has remained silent when she should have spoken up.

“So I ask each of you to have the courage that I haven't had yet,” she said. “I ask that you start considering the impact of your words — those you say and those you don't say. I ask that you consider what you teach the children around you about people who identify with a race outside of those children's own. I ask that you consider how you may judge the differences of another race that result in you thinking the differences somehow make them less than you. I asked you to become more self-reflective and aware of assumptions and biases that you have about individuals who do not look like you.” 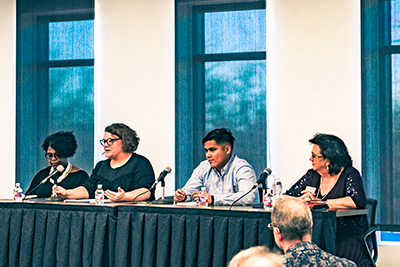 Other panelists were the Neuhoff School of Ministry’s Affiliate Assistant Professor of Ministry and Practical Theology Jodi Hunt, Ph.D., the Gupta College of Business’s Manager of Administrative Operations Joan Copeland, and senior business major Edisson Ramos, BA ’20, who was born in Tama, Peru, came to the United States at the age of four, and is the first person in his family to go to college.

Hunt is from Forney, Texas, where her father was chief of police and hired the first black officer there in spite of being raised by parents who displayed obvious racial biases.

“We often don’t know our biases,” said Hunt. “We need to stop and reflect on our biases. Unconsciously, racism holds his or her own race as superior; seeing people as them/other, we fail to love; we stop showing compassion for the other.”

Ramos, who has been a member of the men's soccer team at UD all four of his years here and recently spearheaded the Groundhog Library Project, which lends texts to financially challenged students for free, spoke of his own experiences of racism as a Hispanic male. He finds that people tend to lock their car doors or clutch their purses when he walks by; getting pulled over by the police is terrifying.

Returning home after being at UD, however, his friends from high school mock the changes in him, because he has learned to speak and carry himself differently, in some sense more formally: “Why are you talking white?” they’ll ask him. This type of attitude, also, can be unhelpful in overcoming racism, making people who are trying to create better lives for themselves through higher education feel that they are somehow turning their backs on their own race or culture by doing so.

“Scars of the past still cast a shadow over modern society,” said Ramos. “Loving those who don’t look like us is tough, and it’s been a blind eye — people who think racism doesn’t exist. We need to be conscious that even though it’s tough to speak up, it’s a reality.”

Copeland, meanwhile, is an ordained minister in the Evangelical Lutheran Church of America; she earned her Master of Divinity at Texas Christian University’s Brite Divinity School. She is also the daughter of German immigrants; she was born four years after World War II, at a time when Germans were looked upon with distrust and dislike. As a child, she was counseled by her parents to not tell anybody that she was German, but at the dinner table her mother and father spoke of other people in stereotypes specific to race or nationality. Copeland graduated from high school in 1968, a month after King was assassinated.

Copeland married a military man and lived in other countries on military bases; these experiences helped her to see possibilities in the way everyone on the bases lived together as one community.

“We were stationed in Germany in the years just prior to the Wall coming down, which I think is a meaningful symbol of coming full circle: tearing down the walls that separate us from one another, physically and ideologically,” said Copeland.

After returning to the U.S., Copeland accomplished her Lutheran components and internship and studied theology at Gettysburg Lutheran Seminary, at the same time working at Gettysburg College as well as serving as pastor of a rural congregation that had received its charter the year George Washington was born.

“That church’s memories include the idealism and dreams of the many immigrants that passed through, settled and built our nation,” she said; meanwhile Gettysburg, of course, was the site of a major Civil War battle.

“I worked at Gettysburg College when they decided to be intentional about dismantling racism — at least on campus,” said Copeland. “An entire week was spent in campuswide workshops and conversations. The author of White Like Me: Reflections on Race from a Privileged Son, Tim Wise, spoke several times and engaged us all in meaningful dialogue in groups whose membership was quite diverse.”

At the college, Copeland worked in the Intercultural Resource Center (IRC), which provided support for students of color from all over the world. At the center, they also took over the mentorship of students who had been part of a program called Philadelphia Futures, which had mentored them through middle and high school.

“Philadelphia Futures identified middle school students who had the potential to succeed but had no family support because they came out of rough situations — parents on drugs, violence, abuse, abandonment, etc.,” explained Copeland. “This program paired students up with a mentor in their field of interest who stayed with them the rest of their high school career. Gettysburg College was the first school to offer scholarships to these students.”

“The mentors were also of various ethnic backgrounds,” added Copeland. “Most of our students came from poverty-stricken inner cities like Philadelphia, Baltimore, Washington, D.C., Chicago, Detroit, etc. Through the mentoring program we offered, our IRC students had a higher graduation rate and GPA than the rest of the college.”

The dean met with these students regularly on an individual basis and helped them learn to solve problems.

“This helped me to see what is possible,” said Copeland. “It was an eye-opening experience and a life-changing one for me; it changed prejudices I had held without even realizing it. What we created at the IRC was a microcosm of an ideal world. Everyone, no matter what race or ethnicity, valued and supported one another in their hopes and dreams. Many of our students went home to make a difference in their communities.”

“We need to embrace the gifts and talents from other leaders and other students,” she added. “In the exchange of ideas among all of us, we can solve problems that we couldn’t by ourselves.”

“I wish I could say I have an answer or formula or some script to give you, but I don't,” added Ginn. “What I do have for you, though, is this idea that if we pray together across racial lines, it can make a difference. I have this idea that if we come together and we truly show compassion for those that we don't actually know more about, then maybe we can end racism. If we really see every single person in the image of God, maybe we could really end racism.”