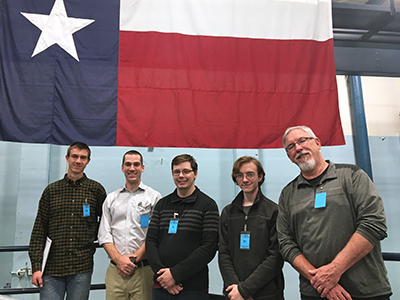 Assistant Professor of Physics Will Flanagan, Ph.D., was recently awarded a $450,000 contract from the Air Force for his work in developing the world’s smallest neutron detector. Of this grant, $135,000 will go to UD to support Flanagan’s work with undergraduate physics students in the Physics Department at UD; the remainder will go to the small business colleagues in Austin with whom the UD team is collaborating.

For what does one use the world’s smallest neutron detector? One important use is to detect radioactive material — i.e., the plutonium or uranium core of a nuclear weapon — as it sneaks across the border; the device would be used at ports of entry such as seaports and airports. Flanagan himself is a second lieutenant in the Texas Army National Guard; his unit is the one that would respond to a nuclear disaster. 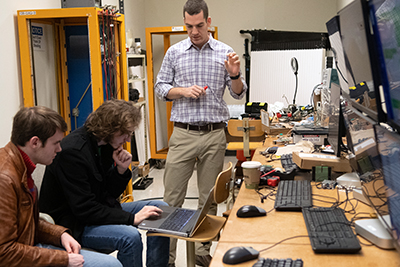 “It is exciting that Dr. Flanagan is able to continue providing UD physics majors with outstanding research projects in neutron physics through his collaboration with Cerium Labs and funded by this U. S. Air Force grant,” said Professor of Physics and Interim Dean of Constantin College Sally Hicks, Ph.D. “Neutrons are the quintessential UD particle, i.e, very elusive; it is almost a matter of faith to know that you have detected one. They are, however, very important for our basic understanding of physics and for national security and energy concerns.”

The primary entity with which Flanagan and his students are collaborating is Cerium Labs in South Austin; Cerium has already developed a prototype, which this team demonstrated in phase one of the Small Business Technology Transfer (STTR) contract from the Air Force. In November, Flanagan took four students to the nuclear reactor in Austin to conduct some of the testing. One of these students was Peter Niles, BS ’21, who first began to consider working in physics research while watching the PBS science documentary series NOVA growing up; Niles will use the nuclear detector both for his summer research project and his senior thesis next year. 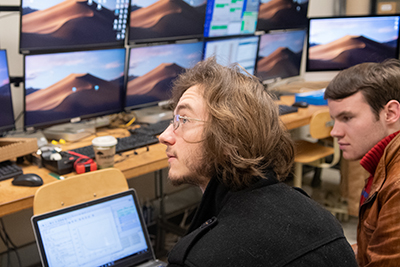 Niles appreciates the good balance of simulation and hardware of the project; he is working with creating the physical detector, building circuits and so on, but also with analyzing the data.

“Often you can get stuck without one or the other, so it’s a good mix of the two,” he said.

Similarly, what Niles appreciates about UD is that because his interests expand to philosophy, history and other liberal arts disciplines, he has been able to explore these subjects here through the Core Curriculum without sacrificing his ability to conduct novel STEM research.

Peter Hedlesky, BS ’21, is also involved with the project. Hedlesky’s father worked in the technology sector and would always bring home gadgets that Hedlesky found very interesting, and his brother, Nick, BS ’14, was also a UD physics major; then in ROTC, now Nick Hedlesky is a captain in the U.S. Army and works with communications for an artillery unit. Following in his brother’s footsteps led Peter Hedlesky first to UD for a visit, during which he sat in on one of Hicks’ classes and was asked very difficult questions by her. Rather than deterring him, this difficult questioning further inspired him to come to UD. Like Niles, he appreciated the interdisciplinary nature of the Core Curriculum. 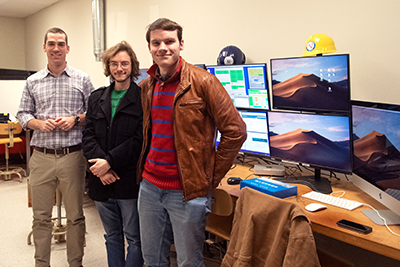 The detector itself is small enough that it could potentially fit inside of a cell phone. In neutron detection, 1s turn to 0s, and this is how you know you’re seeing a neutron. Niles is working on an app that will allow this result to be read in real time.

“What really matters is that we are providing career-advancing opportunities to our students while simultaneously paying them a decent salary,” said Flanagan. “I’ve had summer research students at Fermi National Accelerator Lab near Chicago and the European Organization for Nuclear Research (CERN) near Geneva, Switzerland. It is also nice to have a project within our suite of research which is close to home.” 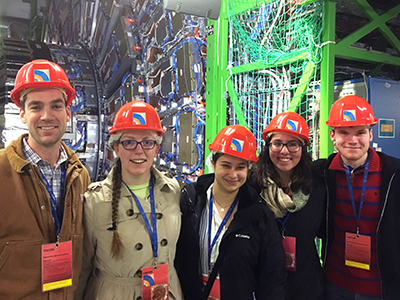 Discover more about physics at UD.

Middle photos: Flanagan, Niles and Hedlesky in the lab.

Bottom photo: Flanagan and UD physics majors inspecting the Compact Muon Solenoid experiment near Geneva, Switzerland. This is the experiment for which Flanagan earned his doctorate, as well one of the two detectors that discovered the Higgs Boson in 2014.