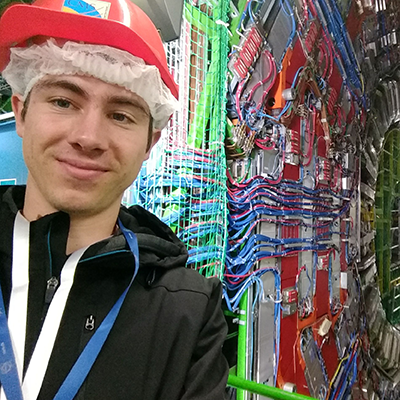 On Thursday, February 6, I arrived in Geneva, worn out from four days of classes, three bus rides, and a rocky EasyJet flight, expecting to have cell service. I didn’t have cell service. Luckily, I did have the name of my destination — CERN, the international European particle physics laboratory — and a brief note explaining my situation to the French guards. I was a “visiting student” with a “visitor badge” waiting for me and a reservation in the on-site hostel. Dr. Will Flanagan, the UD physics professor who had also organized my research opportunity at Fermilab in Illinois in the summer of 2019, had vouched for my status to get me the visitor badge, provided me with email addresses of his contacts at CERN, and scheduled tours of several of CERN’s detectors for me.

Fortuitously, each bus stop featured a map of the local bus system, but I didn’t have a schedule. A man who spoke some Spanish helped me to find the right bus, and the bus driver spoke English; he told me where to get off to catch a tram for CERN. At the tram station, I met a lovely pair of French scientists who were both delighted by my enthusiasm to see the lab and mildly horrified that I knew so little of my whereabouts and my destination; they explained my situation to the guards and gave me a lift to the hostel, nearly a kilometer from the laboratory entrance.

CERN is the largest particle physics laboratory in the world, serving over 10,000 scientists. The central feature is known as the Large Hadron Collider (LHC) — a ring-shaped tunnel 27 kilometers in circumference filled with high-voltage superconducting magnets and radio frequency (RF) chambers. The magnets bend and focus a beam of protons (or larger particles, such as lead ions); the RF chambers accelerate them to a velocity equal to 99.999999% of the speed of light. These intensely energetic particles typically hurtle through the tunnel 400 million times before interacting — either with another particle or with a fixed target — inside one of the seven detectors placed at intervals in the tunnel. 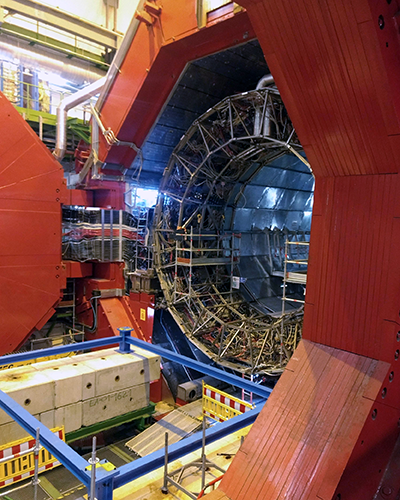 Friday morning I woke up to sunny blue skies, green grass dotted with yellow flowers, and spectacular views of the Swiss Alps to the east and the French Jura to the west. At the reception office, I picked up my visitor badge and connected with the English-speaking guide for my first tour: the superconducting synchrocyclotron (SSC), one of the oldest CERN experiments. The dorm-room-sized apparatus served as CERN’s first particle accelerator, before the LHC was imagined.

After the SSC tour, Brandon Soubasis, a graduate student at Vanderbilt University, generously picked me up and drove me 15 miles through the French countryside, across the main ring of the LHC to an experiment known as CMS: the compact muon solenoid. Compact because the detector is “only” four stories high and 60 feet long; muon for the particle it specializes in detecting — a particle similar to an electron but heavier and less stable; solenoid because the central feature is a large, cylindrical magnet capable of producing a field 100,000 times as strong as Earth’s.

Essentially, CMS is a huge 3D camera for tracing particles. It was built between 2001 and 2009 to search for the Higgs boson, whose existence had been postulated in the 1960s but never verified. Results from four earlier experiments in the same tunnel, observing collisions between electrons and antimatter electrons (positrons), pointed to a large and heretofore unobserved particle, but it was proton-proton collisions in CMS that would produce the critical data. Not that CMS could actually “see” the Higgs, but in 2012, CMS produced photon tracks matching the predicted decay products for a particle 125 heavier than a proton — the Higgs — and vindicated the model proposed nearly 50 years earlier.

Friday evening, I watched the sunset over Geneva from a pier in Lac Léman.

Saturday morning, Dr. Stephen Pordes, a high-ranking physicist at Fermilab, showed me around the neutrino platform, roughly analogous to the part of Fermilab where I had worked. The “neutrino platform” refers to a set of experiments housed in one of the largest buildings I’ve ever seen, all dedicated to detecting neutrinos, particles so small they were originally thought to be massless. Several large detectors dot the building, many of them candidate detectors for DUNE, the next big neutrino project in the United States. Dr. Pordes showed me one of these, explaining the technologies required to detect ghostlike neutrino particles: a cube-shaped, house-sized tank of liquid argon, criss-crossed wire planes, and cleverly folded steel that can contract as it cools to -186 degrees Celsius without pulling away from its casing. Neutrinos entering the chamber occasionally interact with an argon atom, releasing charged particles that drift to the wire planes. The wires record the position and time of particle hits, allowing software to reconstruct the entire track of the particle and identify it. But I can’t do justice to the humor, intelligence and patience with which Dr. Pordes conveyed this information. 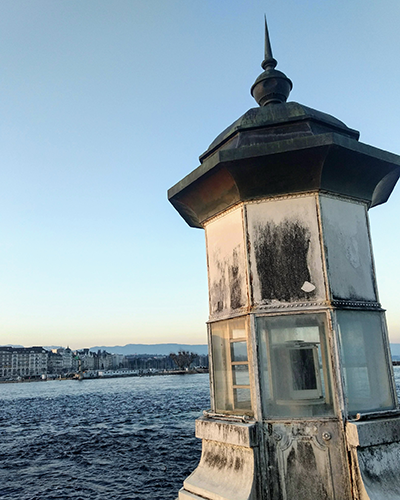 For most of Saturday afternoon, I rested my brain, which was more or less saturated with all the information I hoped to absorb and retain, by walking on bike paths through the cornfields around CERN, enjoying the views of snow-covered peaks and gentle hills. But I had one more tour to go: ALICE, A Large Ion Collider Experiment. At the center of ALICE, lead ions collide at close to the speed of light, resulting in temperatures about 100,000 times the core temperature of the sun. This event, not as dangerous as it sounds, can give scientists an opportunity to study the conditions believed to have existed microseconds after the big bang. Like CMS, ALICE is roughly cylindrical, several stories high, and housed in a chamber a couple hundred feet underground; but like many of the experiments at CERN, the logistical impressiveness of the detector hardly matches its scientific importance.

One more night in the hostel, an early-morning flight back to Rome, and a few hours later I would be back on the beloved Due Santi campus. Two weeks later, the coronavirus outbreak in Lombardy would precipitate a sooner end to our travels in Europe than we’d hoped — but I’m glad I got to see CERN. The tour guides were excellent; the detectors more impressive in person than in the stories I’d heard; the science fascinating; and the backdrop — Geneva, the Jura, the Alps — breathtaking. Thank you, Dr. Flanagan! Thank you, tour guides. Thank you to UD for an absolutely wonderful half-semester in Rome. And in all things, thanks be to God.