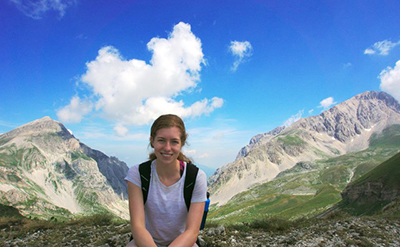 In a mountain range in Italy, Sophia Andaloro, BS ’19, investigates dark matter — a big, unexplained mass found all over the universe that interacts gravitationally with atoms but is invisible.

From looking through telescopes, scientists have determined that about five times more dark matter exists than visible matter such as protons, electrons, planets and stars. The dark matter doesn’t engage with light in a way that creates visible charge that can be seen, so scientists are unsure about its nature. Nonetheless, scientists study dark matter from two sides: theoretical and experimental. Andaloro works on the experimental side, so she is actively searching for dark matter in a lab. Theorists, meanwhile, are trying to come up with viable candidates for what types of particles or conglomerates of masses this dark matter could be.

“Dark matter was discovered more than 80 years ago, but it wasn’t until 20 years ago that there was a push to explore it further and detectors sensitive enough to do so, with the technologies that we use to detect it,” said Andaloro. “We know that it’s something massive that interacts with gravitational force. Hopefully, we can see it interact in some way with another force using detectors, and then we can try to infer what it is; trying to get that really weak interaction that the theorists have told us might be present is what we set up our detectors for.” 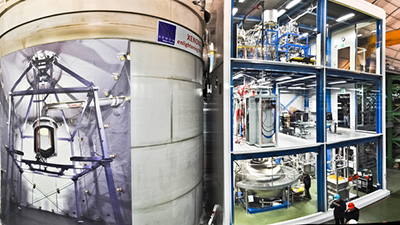 The Xenon Experiment in the Italian mountains uses an Earth-based detector; sometimes experimental dark matter physicists like Andaloro send up satellites to look for dark matter, but this particular experiment is one done from Earth.

“We set up really sensitive detectors with really pure material and monitor them for months to years, looking for possible interactions; all of that monitoring and setting up sensors to try to catch interactions takes such high computing power that it really is this last generation of physics experiments that made searching for it directly on Earth possible,” explained Andaloro. 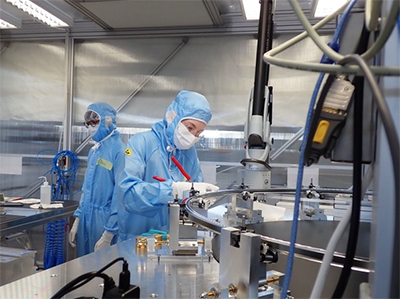 One of the 2019 Cardinal Spellman recipients at UD, Andaloro received both the 2020 NSF Graduate Fellowship and the Department of Energy National Nuclear Security Administration Stewardship Science Graduate Fellowship (DOE NNSA SSGF) this past year, her first year in graduate school at Rice University. She is one of five graduate students working in a range of physics fields, as well as materials science, who will join the NNSA program this fall.

The DOE NNSA established this program in 2006 to meet a demand for scientists with deep training in areas of interest to stewardship science and to support the education of doctoral students researching high energy density physics, nuclear science, materials under extreme conditions and hydrodynamics. Stewardship science is concerned with the collection and reporting of monitoring data in an ecosystem to inform management of a natural resource. The DOE NNSA’s Fiscal Year 2020 Stockpile Stewardship and Management Plan (SSMP) aims “to ensure the safety, security and effectiveness of the U.S. nuclear weapons stockpile and to maintain the scientific and engineering tools, capabilities and infrastructure that underpin the nuclear security enterprise.”

The NSF Graduate Fellowship wouldn’t have changed Andaloro’s path, but the NNSA will, as it is geared toward the stewardship missions of the NNSA. This fellowship in particular looks at the pillars of the “stewardship of science” mission, which encompass understanding how our nuclear stockpiles can be safely monitored; this monitoring includes not only U.S. stockpiles but also those on a global level in an attempt to keep everything in check. Nuclear disarmament is a side mission related to Andaloro’s research, and the fellowship’s focus on nuclear monitoring also fits into the understanding of xenon as a nuclear detector material. 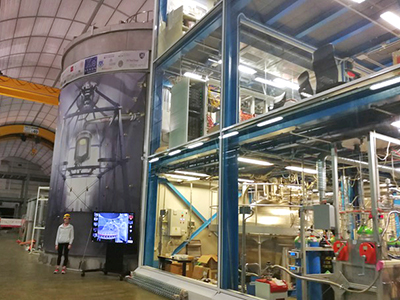 “What we have is a big vat of xenon that is sensitive enough to potentially detect dark matter, so I would be trying to take the knowledge and science from that and apply it to using the xenon in a nuclear security capacity,” she said. “You get so much information out of the technologies that my collaboration builds, so it would be a shame if we didn’t utilize all of that technology in stewardship science as well. The motivation, then, is bringing everything that the dark matter experiments and communities have built up in the past 20 years into stewardship science, and that was my proposed plan for the fellowship.”

For the most part, over the next four years while she has the fellowship, she’ll be continuing to work on the Xenon Experiment, because this experiment is very closely tied to her project for the fellowship. The main difference from the NSF is that she will have to do a summer practicum at a national laboratory, spending a summer as a fellow for 12 weeks and working on a project at one of the sites, which could change the course of her thesis slightly, but she intends for her topic to stay in the realm of data science and the heavy analysis of dark matter detectors.

“The practicum at the lab is one reason I chose the NNSA over waiting to hear if I’d gotten the NSF,” she said. 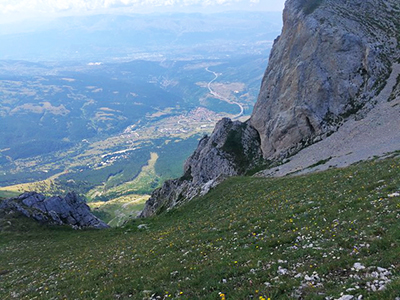 In the Gran Sasso mountains, the Xenon Experiment uses very cold, very pure liquid xenon, isolating it and setting up shields (being under a mountain is crucial for this). Detectors or sensors are all around the xenon, and Andaloro and the other scientists look for a particle that comes in and scatters off of some part of the xenon; it could scatter off of the electrons or the nucleus, for example. Andaloro is particularly interested in the difference between scattering off of electrons and scattering off of the nucleus; the traditional dark matter particle that paved the way for this experiment is the Weakly Interacting Massive Particle (WIMP), which would theoretically interact with the nucleus, but lately there have been other candidates, such as axions, which would theoretically interact better with the electrons in the xenon, so it’s important to isolate the nuclear from the electric recoils. 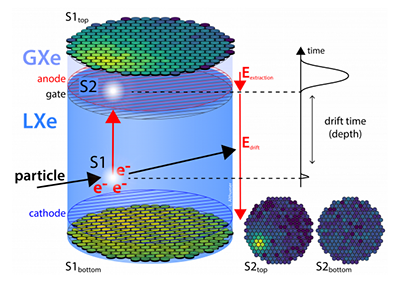 “Originally we thought that if a particle is interacting with the electrons, then it’s coming from backgrounds — radiation, gamma rays, stuff like that — because these types of backgrounds really like electrons,” said Andaloro. “We were isolating the nuclear signals from the electronic signals because we wanted to examine the nuclear recoils for dark matter. Then, in June, the XENON experiment reported an excess of low-energy electronic recoils, which we report could come from a few things. This could be a typical background source like unaccounted-for tritium (a type of hydrogen isotope), could be caused by the magnetic moment of the neutrino (the lightest standard model particles we know of), which would be a significant discovery, or thirdly, could be caused by axions, a dark matter candidate. Further testing on these electronic recoils in XENONnT will in part rely on my contributions to our backgrounds characterization.”

The fellowship is extendable for four years, and Andaloro’s doctoral program, of which she is now in her second year, will take five years, so they will expire around the same time.

“So for the next four years, I’ll be working on this,” she said. 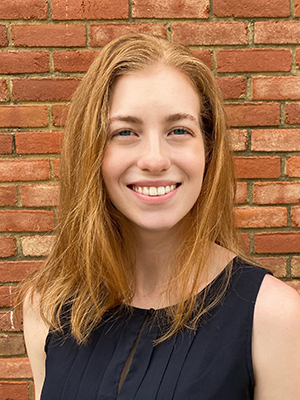 As Andaloro explained, there are basically three paths for physics doctoral students. They can go into academics, work in a national lab, or go into industry. Andaloro has been a TA frequently and does like teaching (she especially loved teaching at UD), but she is wary of the intensely competitive nature of academics and also doesn’t like that you don’t have much say in where you end up.

“I would like to have the freedom to move around, geographically as well as in research project areas,” she said.

Her practicum at the national lab could determine her career path, but she also finds industry very intriguing.

“There is a lot of give-and-take between industry and academic research,” she said. “Usually industry takes more from academia than it gives, but one interesting example of it being the other way around is how academia took the vessel for a detector material from an industrial company that builds cargo ships. I like that type of connection, and it would be fulfilling to figure out how to apply what I learn in particle physics in the next four to five years to a more industrial problem.”

Ultimately, there are pros and cons to all paths, and she will determine over these next years what she is most suited for. 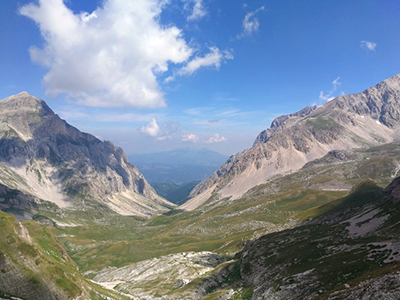 Andaloro came to UD because her older sister is also an alumna, who graduated the May before Andaloro arrived, and Andaloro had also participated in the Arete summer program on campus, so she was already familiar with the university.

“I came in as a math major,” she said. “I knew Dr. Andrews and thought he was awesome — I thought, wow, this is a really cool department; I hadn’t realized math could be so personable and fun and friendly. I came to UD because I knew I would find fulfillment through the close relationships with teachers as well as the community; I knew my sister had had so much personal, spiritual growth there as well.”

While UD’s Physics Department is small and doesn’t provide as many internal research opportunities as at larger schools, Andaloro believes it to be outstanding.

“Especially in the past five or so years, the faculty is amazing, and the research opportunities are growing,” she said. “Dr. Flanagan is a particle physicist, and Dr. Hicks was my mentor; she’s been so supportive. Really, everyone in the department is outstanding; you don’t get that type of department at most universities. To have all of the faculty be amazing is really hard to come by. 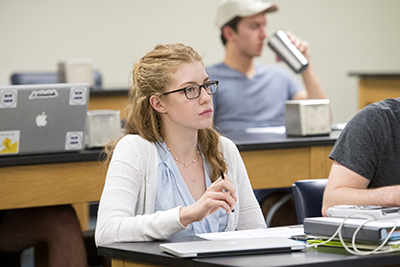 “Also, at UD there are no TAs; you know the professors by name,” she added. “It was a little shocking coming to Rice because even though it’s also a relatively small school, you don’t have that relationship with your professors. I love that the professors at UD are committed to the students; that comes first over research, publications, grants. I’m glad I went to UD because it has such great faculty. I don’t think I’d have been a physics major, or at least a successful physics major, without them.

“At UD, it’s amazing how many lives they change with so little resources,” she concluded. “I hope UD keeps getting more physics students, because I know we’re out there; so many of my friends are doing amazing things, so hopefully word about them spreads, and we get the word out about the Physics Department.”