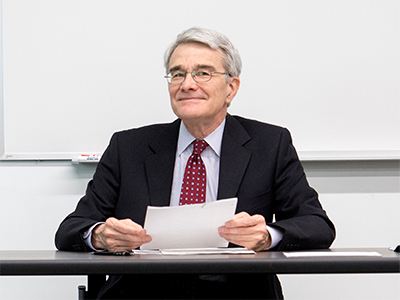 For the first time, the complete edited works of Thomas More are available in contemporary English through one book and one website. Between the recently published book The Essential Works of Thomas More, co-edited by Gerard B. Wegemer, professor of English and director of the Center for Thomas More Studies (CTMS), and Stephen Smith Ph.D. ’01, Temple Family Chair in English Literature and Dean of Faculty at Hillsdale College, and essentialmore.org, the project comprises the most complete collection of the works written by the English man of letters Thomas More.

Wegemer has devoted the past 35 years of his career to studying the English lawyer, philosopher, statesman and, ultimately, martyr and saint. Smith, his co-editor, has been working with him on this project for the past 20.

Throughout his work, however, Wegemer has been continually surprised by More.

“He lived a balanced life, was an exemplary father and husband, served his city and country at the highest levels, helped bring the Renaissance to England, was a model statesman, scholar, and saint, and was most famous then and now for his great sense of humor,” said Wegemer.

The primary labor for this edition of More’s writings was punctuating, standardizing spelling, and glossing words with special meaning from the 1500s.

“There are 19,000 footnotes in the book,” said Wegemer, “and they are mostly defining words that people wouldn’t recognize today.” 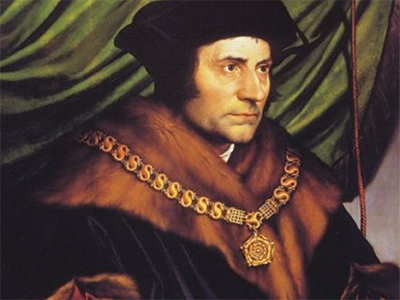 The print book contains all 20 of More’s books, 106 of his letters, 300 of his poems, a reconstruction of his trial, the prayers and spiritual guidebooks he wrote at various times in his life, and the earliest biographical accounts including the play Sir Thomas More by five London playwrights. The supporting website contains study materials and full texts that wouldn’t fit in the book.

Pope St. John Paul II made More the patron saint of statesmen in 2000. The Center for Thomas More Studies provided materials to the Vatican for that year-long process and the culminating ceremony in November 2000. Then, Wegemer thought that a publication like The Essential Works of Thomas More was only a few years away. However, both the project and the man turned out to be far more complex and multifaceted than he had expected.

Wegemer hopes that the publication of this book will lead to a renaissance in More studies.

“More was a liberally educated person who defended liberal education. His daughters received the same education as his sons. The world needs this model of a statesman who is also a model family man, intellectual and saint,” said Wegemer.

Between More’s sainthood and martyrdom, his presence as a cultural figure, and his role in history, there is much to interest the layperson in More’s works. Additionally, lovers of William Shakespeare will be interested to know that Shakespeare learned deeply from More. Shakespeare used More’s literary history of Richard III to write his four earliest plays (Henry VI Parts I, II and III and Richard III); More appears as a character and is praised in Shakespeare’s last play, Henry VIII; Shakespeare also wrote at least two of the most important scenes in Sir Thomas More, a play that never made it past Queen Elizabeth’s censors.

While editing More’s works for contemporary readers, Wegemer has also published six books and more than a dozen scholarly articles on More as well as teaching courses on Thomas More to UD’s undergraduate and graduate students.

To learn more about Thomas More and his works, visit essentialmore.org.