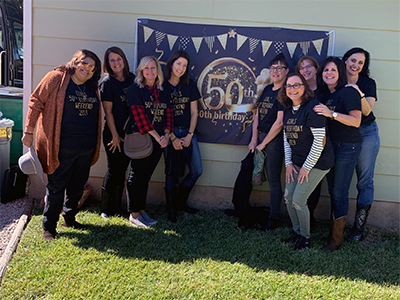 Cathleen (Gilmore) Guinn, BA ’91, Milagros “Millie” Lozano, Ph.D., BA ’91, and Anna (Gordon) Torres, BA ’91, met at the Cap Bar in November 2018, almost 30 years after their spring 1989 Rome semester. Excited to see each other (and Super Dave), inspired by the photos of Rome on the walls, and invigorated by their conversation and shared memories, these three onetime Rome “sisters” conceived the idea of gathering several of their former classmates for a weekend reunion.

“It started off with us talking about how we should all get together, and invite others from our class, and snowballed from there,” explained Torres. “It was also somewhat surreal to realize that we were all turning 50 in the next few months.”

As they talked more about whom to invite, they decided that they would limit the group to other women from their Rome semester. 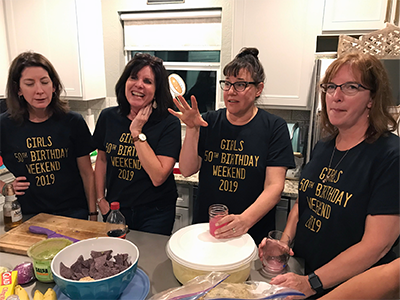 “What we went through together as Romers was so profound,” said Torres. “We experienced something so incredible. As most of us hadn’t seen each other for almost 30 years, though, it made sense to keep the gathering manageable.”

They gradually compiled a list of 23 names, reaching out through Facebook and email until they had contacted them all; ultimately, 11 committed to the weekend. Torres, now a lawyer in San Antonio, found a house to rent near the town of Marble Falls in the Texas Hill Country and also rented a van to take them all to a vineyard, then a country and western bar. She also tracked and divvied up the costs of the weekend. Guinn and Lozano made sure that sustenance and gifts were plentiful — “girls’ weekend” T-shirts and glasses with everyone’s names, as well as a plethora of smoked meats and other great food. As they were all turning 50, the weekend became a joint 50th birthday celebration in addition to a Rome reunion. 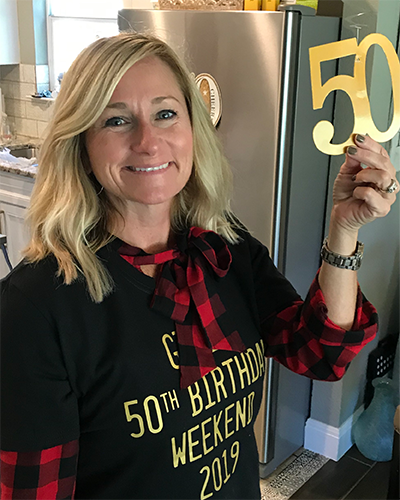 Guinn, the most pragmatic of the three, pointed out that the weekend was to be, in true Roman fashion, ultimately about “food, frolic, friendship and faith … and of course wine!” She began a GroupMe for those who accepted the invitation to reconnect and titled it “The UD Wine Philosophers.”

“Reconnecting with our college friends and seeing who and where we are at this stage in our lives was invigorating!” said Guinn.

Like Torres, Guinn and Lozano live in Texas; Guinn is a teacher in Arlington and Lozano a psychologist in Irving. However, their fellow Rome semester alumnae flew in from all over the U.S., including Georgia, Kansas, Minnesota and Missouri. Assembling at the house in Texas, they picked up right where they’d left off.

Torres recalled that in some ways, they all regressed quickly to their 20-year-old selves. It was easy to laugh and joke and remember crazy, memorable experiences from their time together in Rome. The maturity of three additional decades, however, added depth to their reunion. They shared with each other many of the sorrows they’d experienced since they had last been together, including cancer, divorce and widowhood, as well as their pride in their families and professions.

“There was joy and happiness, but also pain,” said Torres. “It ended up being so good for our souls.” 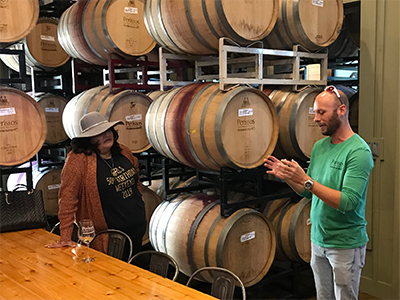 They poured through old Rome photo albums, visited a vineyard and went dancing, reminiscing all the while. Their Rome class was one of the last to stay at the Via del Pescaccio campus, although they were the first UD class to visit what would become the Eugene Constantin Campus (known affectionately by us all as “Due Santi”). They visited the “new campus” during their semester in Rome, when the university was making arrangements to purchase the property. It had been a beautiful day, Torres recalled, and she and Lozano pushed each other into the swimming pool.

At the end of the weekend, the group made a commitment to get together again every other year — with the next time being the same year as their 30-year UD reunion in 2021. They’re  hoping that other women from their Rome semester will join them for future reunions. 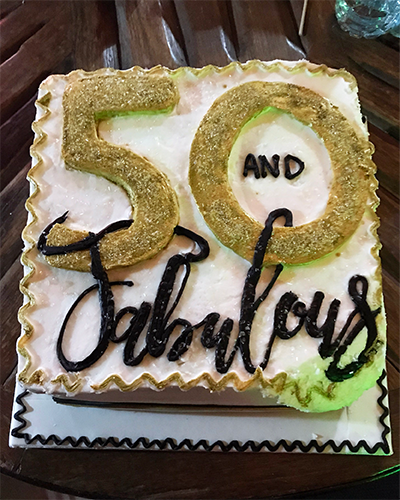 A few days after everyone returned home, Lozano left with her mother for a pilgrimage to Rome with their diocese, where they were able to meet Pope Francis. Lozano had taken her “girls’ weekend” shirt with her to the Vatican, and she asked the pope to bless it, telling him the story of UD’s Rome Program and the Due Santi campus. After he blessed her and her mother, Lozano asked him to also bless the shirt, which contained all of the initials of the onetime Rome classmates who had reunited that weekend in Texas, and of course he did so. When Lozano told her friends, they wanted her to share the story with the rest of the UD community, as well.

Since their birthday/reunion weekend, the group has stayed in touch and supported each other through emails, texts and a chat group; during the COVID-19 pandemic, they’ve had two or three Zoom meetings.

“We went back to what we were in Rome but have also shared what we’ve become,” said Torres. “It’s so profound.”

“It’s a story of love,” said Lozano. “Love for school, people, Catholicism — love for what brought us together. UD made me,” she added. “I hope that this reunion will be just the first of many to come.”