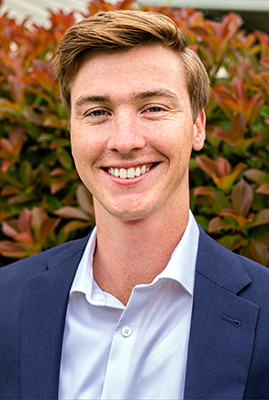 This is the second in a series of eight stories that will be published to highlight the achievements of some of our seniors in the Class of 2020.

“Music on the Mall” every Friday afternoon is a treasured tradition for many students at UD. Between the music, the occasional barbecue, and the friends, it comes as no surprise that the weekly celebration attracts prospective students such as Andrew Butler, BA ’20, once was.

During Butler’s last visit to UD as a high school senior, he was talking with some students in the Society of St. Joseph who were hosting a cookout during Music on the Mall, when he realized he had found his school. Butler says he was struck by the liveliness of the conversations and the welcoming attitudes of all the students — this community was something he knew he wanted to be a part of.

The relationships among the students have remained one of his favorite things throughout his time at the university. Looking back at his four years at UD, Butler says he is especially fond of the friendships made in Rome. Through the adventure of traveling from new country to new country and the excitement of running, unplanned, into fellow students during his 10-day break in Rome, Butler formed strong, lasting friendships.

“It wasn’t just the experiences that strengthened my friendships, though,” he said. “It’s the fact that UD places you in an environment not just conducive to but proclaimedly purposed for the pursuit of truth, goodness and beauty.”

Butler is not only grateful for the community he found; he is also very thankful for the unique education he received. UD’s business program is unusual in that it mandates that each business major take a class in a variety of different fields (e.g. accounting, marketing, ethics).

“I think this curriculum leaves its students well equipped to become versatile managers who have a critical understanding of their organization’s different parts as well as a broad outlook on it as a whole,” he said.

Many business programs at other schools offer a variety of specialties, which makes the broad focus of UD’s business major appear to some as a downside, but Butler found it to be well-purposed.

Indeed, he had the same positive outlook toward the wide variety of classes required in the Core Curriculum.

“The Core is the most challenging part of UD, but it’s also one of the things that makes UD so great … no matter what your major, you are going to have to take classes in subjects that you aren’t good at,” said Butler. Like a true UD student, Butler has found that the Core truly enhanced his education by forcing him to work harder and become better at things that didn’t come as naturally to him.

Although school took up a lot of time, Butler was involved with the Society of St. Joseph as well as a variety of intramural sports during his time at UD. During his junior year, he worked part time at NEXU Partners and also for a partnership of UD alumni making real estate investments. Additionally, over the summers he stayed busy working at a variety of places, including at a start-up called IFM Restoration, at Midtown Educational Foundation, and at Telos Capital Advisors, a boutique investment bank.

The contrast of today’s slowness brought on by COVID-19 has certainly created the potential for boredom in Butler’s life during his last semester at UD. But although COVID-19 took away a lot of his “lasts,” he is grateful for the extra time to go outside and be active — especially with a busy year coming up. He is looking forward to starting full time at Goldman Sachs this summer as an analyst in the Credit Risk group, helping to both evaluate the credit risk involved in prospective financings and manage portfolios of established clients. He is especially grateful to Shannon Blatt, director of Personal Career Development at UD, for introducing him to UD Trustee Randy Muck, who mentored him throughout his job search, providing Butler with “ideas, contacts and guidance.”

"Well prepared for the mentoring discussion, Andrew knew what he wanted and needed," said Muck. "He listened to advice very attentively and sought to apply it to his situation, with a good balance of in-class capabilities and out-of-class experiences. He had a good plan for his prospecting and very effective and diligent follow-through and did a fabulous job of networking, networking, networking. He prepared well for the interviews and was very proactive and open to exploring new avenues and listening to advice."

With four years at UD behind him and “real” life ahead of him, Butler is both excited and nervous. He is most sad to have to part ways with many of his friends, but he has decided to look at the situation optimistically: “The goodbyes have reminded me of the great times we've had, and I'm already looking forward to the reunions to come,” he said.