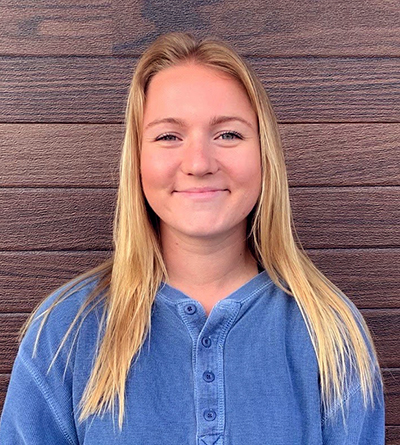 This is the first in a series of eight stories that will be published to highlight the achievements of some of our seniors in the Class of 2020.

Marge Novacek, BA ’20, had no plans to come to UD until April of her senior year of high school. At her mother’s urging she decided she would visit, sure she did not want to go so far from her home in Menomonee Falls, Wisconsin. During her visit she had some time to sit on the mall, contemplating and observing like a true (almost) UD student. It was in these moments, noting the people and the friendships in front of her, that she knew it was the place for her.

Her instincts were right, and the people she met have been critical to her experience at UD. One of her favorite memories is from the Greek Olympics during her Rome semester: She didn’t know her team when she started, but “Those people are some of my best friends now!” she said.

It might seem like a coincidence, but at UD it really isn’t. What she loves most about these friendships is that, “since UD draws students from such a wide range of places, we have so many different backgrounds and personalities, which always keeps it interesting!”

Novacek found that her observation of the people at UD rang true in the classroom as well, through her professors. She loved many of her professors at UD, noticing that the attention they gave to their students was a very unique blessing. Novacek remembers her interactions with her professors fondly.

“I can’t tell you how many times Mrs. Khirallah dropped what she was doing to chat with me about an assignment, or to help me figure out how to make my schedule work,” In addition, during her senior year, she received emails with job recommendations from her teachers. “Our professors are constantly thinking about how to help us — not just during class time — and I just don’t think it’s possible to get that at a bigger school.”

These supportive teachers helped Novacek through her difficult semester student-teaching and prepared her well for working after graduation and to confidently say, “UD’s Education Department has definitely prepared me for teaching!”

Although it was hard being so far from home, Novacek now plans on staying in the Dallas area for at least a couple of years. Staying in Irving is particularly a blessing to Novacek after her final semester at UD got cut short. She did miss out on a lot of final experiences with the Class of 2020, but her disappointments only make her more grateful for the time she did have, for taking advantage of being together. As hard as it is at the end of the semester getting closer to graduation, Novacek does not think it will break their class, rather, she says, “I think it somehow will bring us even closer together in the end.”

Novacek plans on teaching middle school in Irving this upcoming year. In reflecting on her decision to teach middle school specifically, Novacek said, “Kids in middle school are entering a more independent stage of life, which means they need good role models, which I knew I could be.” Irving will be blessed to gain her as a teacher, and her students will be especially blessed to have her as a mentor as well. Knowing that her career will be much more than simply passing along knowledge, Novacek is excited to start her job in Irving ISD, teaching and mentoring.