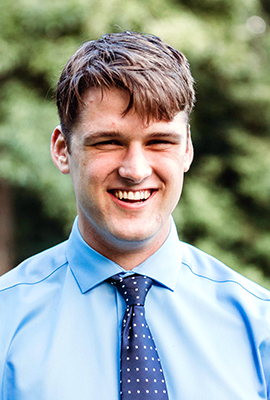 Future Plans: Pursuing Doctorate in Aerospace Engineering at the University of Notre Dame

This is the seventh in a series of eight stories that will be published to highlight the achievements of some of our seniors in the Class of 2020.

Given his strong UD legacy, Bill Bennett, BS ’20, was practically destined to attend the University of Dallas. Stories about UD’s Rome Program and rugby were essential aspects of Bennett’s childhood given that both of his parents, as well as many extended relatives, are UD alumni. But while UD was in his blood, he ultimately chose UD because he wanted both a liberal arts education and a degree in physics, and he knew UD was the best place to combine the two.

Like much of his family before him, Bennett was actively involved with the Rugby Club while at UD. Rugby helped pull him to UD and pushed him to grow while there.

“I learned a great deal about responsibility, charity and leadership from being a part of the team,” he said. While rugby is most often considered an extracurricular activity, Bennett saw it as part of his education.

But of course, as a physics major, Bennett had a more academic education as well. It was while he was in high school visiting colleges and universities that he definitively decided physics was for him. The seed had been there since childhood, however, given that Bennett’s dad had been a physics major as well. Because of that, when he was young, Bennett thought being a physics major was “super cool.”

“By the time I realized studying physics isn’t exactly cool it was too late,” he laughed. “I was hooked.”

In all his time spent on physics, Bennett found himself missing the liberal arts he had grown to love in the Core Curriculum, so he made sure to keep taking some classes in the humanities as well. Bennett says that it was these classes that gave him an understanding of what the liberal arts really are. He particularly recalls the impression Early Modern Literature had on him.

“That class really broadened my ability to think critically about texts and showed me that the liberal arts have high stakes,” he said.

It wasn’t only that this influential class brought Bennett to see its scope; it also made him realize how prevalent these topics are in our society.

“Dr. Wegemer brought texts and authors that I had either never heard of or thought were strange like Gulliver’s Travels or Francis Bacon and taught us about the intellectual battle between the Western tradition and modern ideas,” he said.

But of all the memories that made his UD experience, one particularly stood out to Bennett as a perfect example of a genuine UD experience. In December 2019, a large portion of the junior and senior classes gathered together in the Church of the Incarnation to pray a rosary for the soul of their classmates’ brother who had recently died.

“It was very edifying to see the classes get together and pray like that, and it sticks in my mind as a great example of why UD is unique,” he said.

Bennett values so much of what UD gave him, and he is particularly grateful that he finished his classes in December and thus was not interrupted in his studies by COVID-19. Of course COVID did succeed in affecting some of his plans for the semester, but Bennett is philosophical about these changes.

“If the semester had gone as planned, I probably still would have regrets and say, ‘I wish I had spent more time with my friends,’ etc.,” he explained. “The virus helped me realize that it is important to be happy with the time I had already spent at UD.”

Bennett hopes that as COVID has helped him to be grateful for what he had at UD, so it will help those who are still at UD to “make the most of their time.”

Bennett plans to go to Notre Dame in pursuit of a Ph.D. in aerospace engineering in the fall. He is grateful to his teachers, especially Professor of Physics Rich Olenick, Ph.D., Professor of Physics and Interim Dean of Constantin College Sally Hicks, Ph.D., and Professor of English Gerard Wegemer, Ph.D., who helped him not only with practical things such as letters of recommendation but also with counseling and mentoring throughout the whole process. Although he entered UD certain that he would not go to graduate school, he looks forward to his plans.

“Now I am excited about the prospect of being able to continue my studies,” he said.