The Shock of Wonder: An Easter Reflection 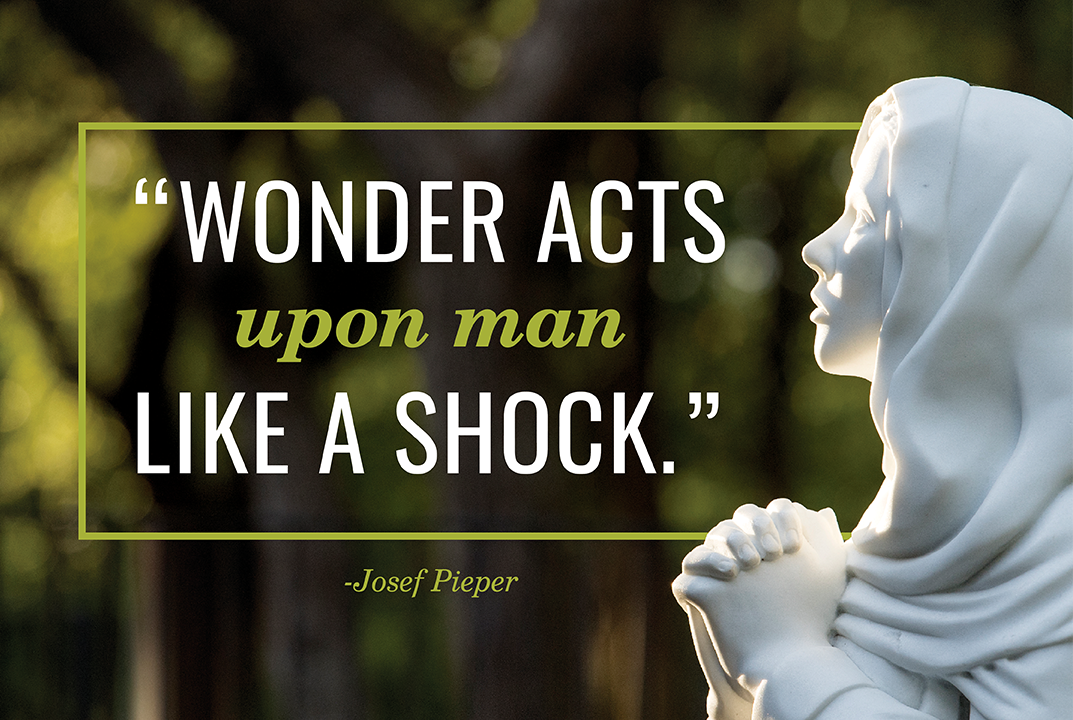 “Wonder,” Josef Pieper writes, acts upon us “like a shock.” The “dislocation” that accompanies wonder unsettles whatever “had been taken for granted as being natural or self-evident.” What had been customary “loses its compact solidity and obviousness.” The passage is from Pieper’s essay “The Philosophical Act,” which is usually published alongside Pieper’s masterpiece, “Leisure: The Basis of Culture.” If I recall correctly, the latter text was required in Father Thomas Cain’s classes. At any rate, it was a text that everyone at UD when I was a student seemed to have read.

There is perhaps no better articulation of the vision of liberal education at UD. At most universities, the capacity for wonder is at best irrelevant or at worst an obstacle to a purely instrumental education or an indoctrination in progressive moral absolutes. However, liberal education, which literally means to be led forth into freedom, does not leave students where they are, with the assumptions and prejudices that they bring with them at the outset. At every stage, it deepens the student’s sense of the complexity of knowledge and of the awesome mystery of all that is.

I recall hearing a story about the philosophical genius, legendary philosophy professor Fritz Wilhelmsen. The story is that Wilhelmsen encountered a freshman student who was having trouble finding a building on campus. “Could you help me?” inquired the timid student. “I’m lost.” To which Professor Wilhelmsen responded, “Take metaphysics!” and walked off.

That’s a story that’s as likely to be apocryphal as it is to be true. But, as they say, if it isn’t true, it should be.

What Wilhelmsen had in mind is that metaphysics, the study of the principles of being, helps us find our place within the whole of reality. But it does so only after it has induced in us an experience of dislocation, a sense of amazement. That was certainly the experience I had in the presence of Wilhelmsen’s teaching, as in that of many other faculty members at UD.

The loss of a capacity for wonder is especially damaging when it comes to our understanding and living of the Christian faith. Søren Kierkegaard, whose texts I read avidly while at UD, thought it a sign of the peculiar obtuseness of modern Christianity that it so often tended to strip the faith of its astonishment. The Triduum that we have just celebrated is nothing if not amazing, disruptive of all taken for granted as being natural or self-evident.

Last year at the Easter Vigil, I was struck by the role of amazement in Luke’s account of the resurrection. Just a week earlier, I had gratefully accepted the job as president of my alma mater. Interim President John Plotts already had a UD trip to Rome planned, and he graciously invited me to join him. We had a chance to visit UD’s glorious Rome campus and spend time with Peter Hatlie and his superb staff.

At the Vigil at Santa Maria Maggiore, I remember being struck by the Gospel. After the women return claiming that they had found the tomb empty and were told that Jesus had risen, the disciples dismiss their tale as a hallucination. Only Peter, ever impetuous, jumps up and runs to the tomb. Finding it indeed empty, he departs “full of amazement.”

How many of us have lost Peter’s sense of wonder? The infinite, eternal and all-powerful God has taken on flesh, suffered the torture and death of a common criminal, and then (wonder of wonders) risen from the dead. For Kierkegaard, the disorder of the modern world, particularly of many who claim to be Christian, is that we could hear those claims and yawn.

Perhaps in this time of global shock and fear, we have an opportunity to deepen our sense of wonder, particularly at the great gift of Christ and His Church. We also give thanks for this great university that has maintained its founding vision of an education that cultivates wonder. As Pieper puts it, "The innermost meaning of wonder is fulfilled in a deepened sense of mystery. It does not end in doubt. Rather, mystery means that a reality cannot be comprehended because its light is ever-flowing, unfathomable and inexhaustible. And that is what the wonderer really experiences.”